The pinnacle of the values of a society is reflected in its justice system. A platform from which a society defines morality, revenge, punishment and forgiveness. Every society has guidelines in place to deal with perpetrators and these guidelines evolve with time. Historically, crime in many African societies was viewed as a private matter between the affected kinships. Gifts would often be sent to the family of the affected individual(s) seeking forgiveness. When the ‘gift option’ failed, blood feuds often emerged with retribution in form of an ‘eye for an eye’ or worse. Other forms of punishment included banishment/disowning of individuals from the clan, family or community depending on the severity of the crime or disgraceful conduct. Disownment was the ultimate punishment at that time since all the descendants of that family branch would have a curse bestowed upon them. These components of justice had similarities to those of ancient Greece and the middle ages. 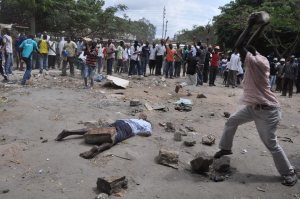 As society grew and communities became more organized with a hierarchical leadership structure, justice was transferred from the control of the private citizens to a centralized system. The concept of laws became common with legislators, enforcers and executioners of punishment. An impartial centralized justice system was meant to protect the rights of the perpetrators while also preventing the victims from seeking vengeance beyond proportional justice. The emergence of kingdoms and chiefdoms resulted into adoption of a complex justice system rooted in culture, customs and taboos. This was eventually replaced by the English common law system adopted in the post-colonial era. Under this system, one was innocent until proven guilty and actus reus( act of wrong doing) and mens rea (intent/culpable state of mind)were paramount to proving criminality beyond a reasonable doubt.

The existence of a justice system for the politicians in power and a separate justice system for the civilians has significantly damaged public trust. As a result we have the emergence of mob-justice/vigilantism, a medieval implementation of justice. It is becoming a common occurrence in many African countries including Uganda, Burundi, Kenya, Cameroon, South Africa, Ghana, Tanzania and others that thousands of criminals get slaughtered on the streets. Other factors contributing to the rising occurrence of mob justice include, a growing number of un-employed youth, social inequality, corruption, poverty and inadequate law enforcement. The mob assumes the role of prosecutor, judge, jury, and executioner. Primal human instincts are activated, transforming a powerless individual into a faceless entity — unleashing the suppressed and caged beast that has no regard for societal norms and values. It is common for a mob to sentence a ‘petty thief’ to death in a matter of seconds and execute the penalty immediately by stoning, beating or burning the victim alive with tires and gasoline. Mob-justice has become symbolic of the mind-set that revenge is ethical in a society that has an ineffective/inexistent impartial judiciary. The current system protects the national wealth buglers from the justice system leaving the petty thief as a soft target for the angry mobs.

Mob-justice is un-acceptable, primitive and has no place in civilized society. Public sensitization alone will not curb these atrocities without a reliable justice-infrastructure. The governments have to guarantee an efficient and impartial justice system supplemented by a reliable and responsive police presence. In addition to that, severe penalties should be handed out to people who participate in these heinous acts to send a message that mob-justice is un-acceptable in our society. Social frustration, un-rest and the spiral of injustice is leading our communities into moral decay and disregard for the value and sanctity of human life. This is an opportune moment to have a national conversation about the need to instill the principles of ‘restorative justice’ to answer the growing dissatisfaction and disconnect between the public and the justice system. In addition to growing public mistrust due to the existence of a tow tier justice system, our society has also failed to grasp the abstract legal concept in which crime is considered an offense ‘against the state’ rather than the affected ‘victim’. Restorative justice can heal this wound and help our communities and victims look beyond retribution and revenge and instead focus on creating deeper and meaningful solutions through building bridges and mending relationships.