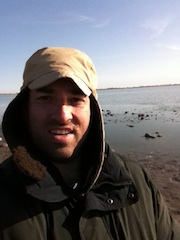 I have to apologize for how late this piece is. I got caught up with the opening of Rye Deli and responding to all of the comments from some woman who has a serious Jewish superiority complex.

My first hunting trip last year was such a success that a 2nd annual trip was planned and perfectly executed once again. Last year’s threesome consisted of one lawyer, one veterinarian, and one underpaid schmuck in the television business (me). Unfortunately the vet bailed on us this year, but he was replaced on the boat with yet another Jewish lawyer. Cousin Rich had heard (and read) all about last year’s adventure, so he didn’t need any cajoling to join us. He did however have to fly in from Westchester, NY and leave the land of Land Rovers for what seems like the pickup truck capital of the world.

I was excited to see Cousin Rich, but I’m not going to lie – I had not-so-subtly requested a corned beef sandwich and his flight arrived at lunch time. I mean, come on – what says hunting for ducks in Southwestern Minnesota better than a kosher corned beef on rye? Let’s just say that Rich dropped the ball on that one, but to his credit, his enthusiasm more than made up for his gaffe.

Seriously folks, I’ve never seen a grown man as giddy as Rich was for an entire weekend. What we were about to embark on was so different from the suit and tie world of land zoning law that Rich couldn’t stop smiling. What I didn’t know (but what I should have expected) is that Rich did some studying and some research. I wish I had recorded some of the questions and comments coming out of the backseat of that Toyota Tundra. 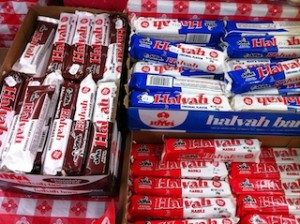 Right: Look what I found in Jordan, MN

As we headed South, we made a quick stop at Minnesota’s largest candy store (and home to the largest variety of puzzles in the Upper Midwest). If you’ve been to Emma Krumbee’s, you know the big yellow tented building on the opposite side of 169. It’s actually quite amazing in there and they carry more than just candy and puzzles. I think I counted 12 varieties of homemade pies, every variety of local apple, and of course, halvah???

After a couple of hours and several ethanol plants later, we arrived at The Lodge. Rich was shocked to learn that it does in fact have electricity. He had associated the lack of plumbing with every conceivable modern amenity.

After unloading our gear, we headed out to the Kinbrae Supper Club for dinner. Instead of ordering three 10-ounce steaks, we went for the 40-ouncer. Only in Kinbrae is that a better deal (and at $35.95, less than $1/ounce). When I asked our waitress for the beer selection, she replied, “we have almost everything.” Seven beers later (including brewed nearby Schell’s), it was abundantly clear that “almost everything” actually means all of the Miller beers. Regardless, it was another spectacular meal at the Kinbrae Supper Club – truly a hidden gem in a town with a 2010 population of 11.

On day 1, there was nothing keeping Rich away from that gun. He wanted to shoot and he wanted to shoot bad. When you commute to NYC every day like he does, it’s a fairly common feeling. Those ducks were in for it. So I sat back and enjoyed as Rich blasted away from our well-hidden location on Heron Lake. I could hear the snickering from above – laughing at the 3 Jews down below. Perhaps they recognized me (and my poor shooting skills) from last year? What they didn’t know is that Rich gave each passing duck a nickname. First there was Adolf, then Hans, then Wilhelm. Those Nazi ducks had no chance.

OK, well one of them had no chance. Rich blasted one little Nazi duck out of the sky. I think it was Hermann. The rest flew through the bullets and made their way to the other end of the lake – where they probably ended up as dinner for some other hunting party.

Giddy Rich was on cloud nine. We made our way back with that one duck, but it could have been 100. Our fearless leader guided Rich through the cleaning process (all documented of course). My personal favorite as the innards of that poor duck dangled in Rich’s fingers was his immortal line, “it’s just so colorful.”

With a partially cleaned duck in the fridge, we chowed down on a breakfast of eggs, toast, and massive amounts of turkey bacon and sausage. I can’t shoot a lick, but I make a mean breakfast.

On our way to Kinbrae the night before, I had noticed that I had forgotten my cell phone charger. Of course, with 17% of my battery left, my wife informed me that she was taking our daughter to the ER (she was fine). So I was actually looking forward to our trip into Worthington after breakfast. The only problem was that Walmart was my only option. Yes, Walmart – the worst company in the world, where people get trampled to death for $2 toasters.

Before I could get to the electronics section, Rich and I had to take care of some business. Let’s just say that neither of us were too fond of the outhouse at The Lodge and some indoor plumbing was a welcome sight. The only problem for me was the line – apparently, a lot of people in that area don’t have plumbing.

With a new charger (and Walmart blood) in my hands, we made our way to the Worthington YMCA. From now on, I’ll call it the Oasis. They too had indoor plumbing and showers and electricity for my charger. I even worked out a little – to work off the steak from the night before and to make sure I smelled extra nice before hitting the showers.

Day 2 of hunting didn’t provide any ducks, but more laughter and storytelling among us. I had an ill-timed surgical procedure on my arm just days before and was in no shape for shooting (good excuse, right?). So Rich took charge and did his best to scare those ducks into submission. If I ever hear about a slight of stature Jewish lawyer going crazy with an Italian-made camo shotgun while shouting out Henny Youngman-type one-liners, I can probably ID him.

We packed it up and headed to the Happy Chef for breakfast and more plumbing. But the weekend was not complete. With only a couple of hours to spare before Rich’s flight, our fearless leader took us on a detour in the town of Windom. There was a sign up for a gun show and he wanted us to see it with our own eyes.

So we went…reluctantly. An amazing array of weaponry and odd-looking Minnesotans. As we cruised the aisles for g-d knows what, there was an increasing sense that we didn’t belong there. Maybe it was all of the Nazi collectibles? 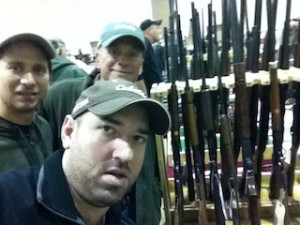 Right: Do we look scared?

Perhaps it was the framed picture of Hitler for sale with the pocket knives and shotguns. Either way, I took this quick photo just in case we went missing.

So my 2nd annual hunting trip was yet another success – filled with awesome camo gear, big hunks of well-cooked beef, and some of the best camaraderie this side of Heron Lake. I look forward to next year – maybe the 3rd time will be the charm (or the end of days for some unlucky ducks).