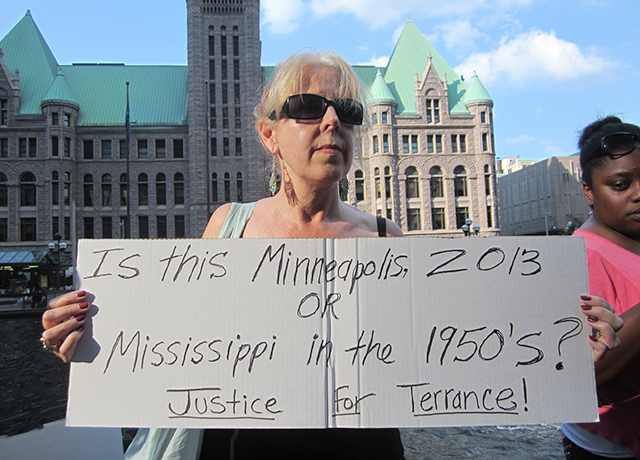 When Cam Gordon and some other Green Party members approached me about running for city council in Ward 3, I was hesitant. I had run for city council before with another third party, the Citizens Party, back in the 1980’s. At that time I was running against what felt like a Chicago-style political machine, run by Walter Dziedzic who served innumerable council terms in Ward 1.

I recall, and not with fondness, the poor treatment I received running in a 3rd party in a DFL-controlled city, locked out of debate forums, dismissed by the media, and the thought of going through that again was not high on my list. But, now with Ranked Choice Voting and so many years of community engagement and experience behind my belt, I acquiesced to the idea of giving it another shot, believing in myself as a well qualified and credible candidate.

Now in Ward 3, 2013, I find myself running against two machines, the old guard DFL machine of the incumbent and the slick, new guard machine of the DFL endorsed candidate. The dual machine politicos combined have sunk close to a quarter of a million dollars into their campaigns. It’s shocking really, to pour all this money into a humble ward consisting of mostly working class people, students and a smattering of hipsters. With redistricting, however, a new Ward 3 encompasses the much more upscale downtown area dense with condos and luxury highrises and big development opportunities.

What would lie ahead? How could I attempt this while working full-time and continuing to care for my elderly father and two MCTC students, all three under my roof? In addition, I had a number of volunteer responsibilities. What would the campaign trail hold for me, what would I learn, and who would support me? The questions all loomed, not unlike feral cats in a dark alley.

I knew the main reasons I wanted to run; I had plenty of righteous indignation – like thousands in the city – over not being able to vote on the Vikings Stadium tax financing sham, over the Mayor slashing precious Neighborhood Revitalization Funds, and the dissolution of the Civilian Review Authority. All of these acts had resulted in massive citizen dis-empowerment. In addition, as a Green, I had a number of forward thinking, visionary ideas to move Minneapolis toward a more sustainable city.

Then, on May 10th something terrible happened which changed the focus of my campaign. Incredibly unprofessional policing led to the outrageous escalation of an incident involving a young man who I knew personally, Terrance Franklin, Terrance was only 22, terrified and unarmed when Minneapolis officers shot him ten times, eight of those shots to the head. An hour later an MPD vehicle raged through a red light and the collision killed Ivan Romero, another unnecessary and tragic loss of life.

I’m not going to go into all the details here pertinent to the killing of Terrance. Much has been written and readers can do their own research if they remain uninformed. Suffice it to say that Terrance should not have died that day, nor Mr. Romero. The MPD, in the events they propelled once they had Terrance cornered, acted as judge, jury and executioner, and no one has been held accountable. Certainly Minneapolis will face yet another costly lawsuit.

In the last seven years, the city of Minneapolis has spent 20 million in payouts for police misconduct. But more important to me, the lives lost and harm done to individuals, many of whom are poor and people of color. If people don’t find this pattern of abuse chilling, if they can’t put two and two together when they look at all the cases, all the other Terrance’s, if they can’t comprehend the injustice of it, they must be numb or sleeping, or worse.

Post May 10, as I began working with and showing up for every rally and protest sponsored by the Justice For Terrance Franklin committee, whose meetings were based out of a church basement in North Minneapolis, it became apparent to me that many people around me, “progressives,” community activists, folks who who pride themselves in doing good deeds, were staying silent about the worst violation of civil rights that can occur – the taking of a person’s life – by the very authorities that promise to protect and serve, “with compassion.”

While the self-proclaimed progressives were parading their endorsements from the police federation or chanting about their awards for work on civil rights, no one save myself in Ward 3 (or Ward 1, where I ran before) was uttering a word about police misconduct and the reality of racism and racial profiling that is experienced continuously by Blacks and other people of color in Minneapolis, many of whom are extremely angry and were deeply affected by Terrance’s killing. I began to wonder, if one ignores such an unspeakable injustice in one’s secluded, insulated world of white or class privilege, is the hope that it might just dissipate, until it seems like it never happened at all?

After the verdict on the Trayvon Martin case was released, I attended a huge rally downtown. Rally organizers were making the connection between the injustice of both the Trayvon and Terrance shootings. One of the speakers told the diverse audience of over 3000: “The next time you get ready to vote for someone, ask them about the issue of racial justice, and if it’s not on the top on their list, they don’t deserve your vote.” It was at that moment that I decided to move this issue to the top of my campaign, and to address it at all the debates, no matter who my audience was.

I’m fortunate to be in a political party – The Greens – that have long spoken out in support of police oversight and racial injustice, and I receive their full support. I am not surprised that almost every person I talk to who is not white, in discussing what happened to Terrance, has no doubt about how he was killed, or why. In addition, I have heard numerous more stories from people of color about their own encounters with a racist and unprofessional criminal justice system. It is sobering. I want to talk about all the positive, hopeful things I love about the city I have lived in my entire life on the campaign trail, but I can’t ignore reality, I can’t not talk about this.

In closing, it is a disappointment that so many of the people I am acquainted with in my community that I have worked with over the years on a number of progressive issues, having to do with food, the environment, schools, etc. have not been able to recognize or have been afraid to speak out on such an important issue of civil rights. But sometimes, life lessons and the information you garner as a result of an endeavor is not the information you want or expect. Instead, it is the information that you need for growth, to take you to the next level. Every disappointment has been replaced by the hopefulness of many new people I have met who are standing in solidarity on this issue.

As for this election, my winning or losing, in the end, is not paramount. In the end what is most important is staying true to the values you have held your entire life about equality and justice. If you are a candidate or an elected official, it is about speaking out on behalf of every person in your city and remaining, to the best of your ability, true to yourself.