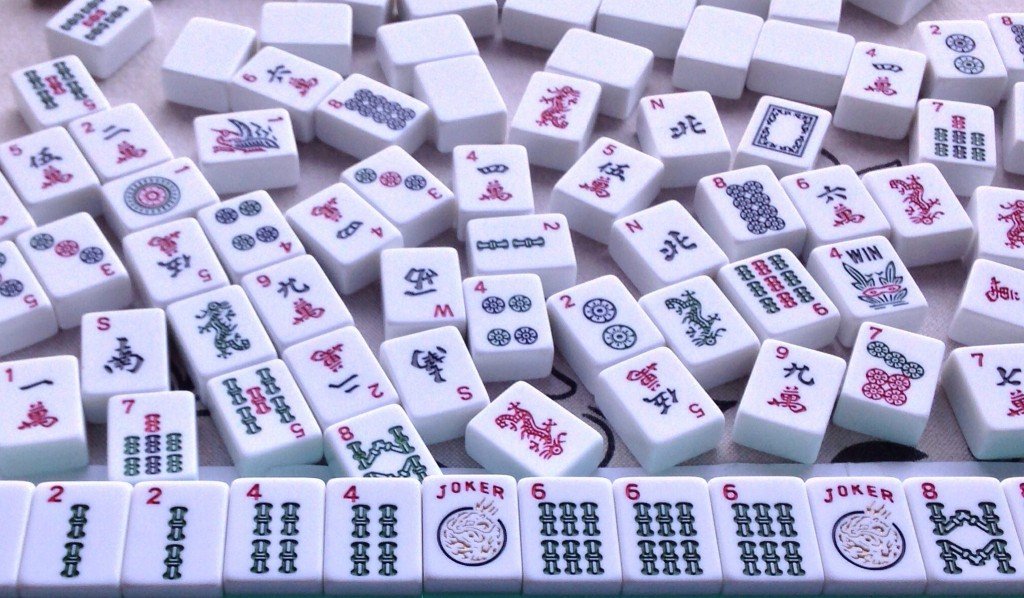 Five years ago when a close friend told me she wanted to start a mah-jongg group and invited me join her, I immediately said yes. Sure, we were in our thirties, not our eighties, but I liked the idea of getting together with friends for an activity that included neither our children nor our spouses and resembled nothing I had tried with friends before.

I also found it appealing that this proposed activity was not a book club, as I’d already been in several mostly-unsuccessful ones in my adult life. I appreciated, too, that playing “mahj,” as it’s more commonly known, would give me something to do with several friends at once that was different from the usual dinner outing for someone’s birthday where you never get to speak to the people on the other side of a long table.

My only hesitation on the idea of mah-jongg was that I’d never been good at games, not Scrabble, chess, or any card games. As a child and grandchild of avid bridge players, however, I felt it was good to know a game. My parents have been playing with the same bridge group for almost forty years. I decided that learning to play mah-jongg would be a life skill more useful and knee-friendly in the later years than tennis and an infinitely more economical one to have in my repertoire than golf.

My friend put together a group of eight women, all beginners, and we set a schedule of two evenings a month. We found a few more experienced players to teach us during our first few games, but otherwise we learned as we went along, joining a long line of women, many of them Jewish, who for decades have been sitting around tables in groups of four with mah-jongg tiles and cards. Several of the women in my group remember their grandmothers and mothers playing and we even play with an inherited set where the tiles are faded and the tile holders come in nostalgic colors.

More recently I learned that mah-jongg came to America from China when one American businessman working for the Standard Oil Company brought the game back with him in 1912. According to the website My Jewish Learning, by 1920, Abercrombie and Fitch, a sporting and travel goods store at the time, was the first place to sell mah-jongg in America where it was already getting popular and deviating from the Chinese version.

By the end of the 20s the mah-jongg craze had decreased significantly in the general population, but the game stayed popular among Jewish women. In 1937, a group of Jewish women formed the National Mah Jongg League to establish standards and rules for the game. The same organization still sells the cards dictating which hands mah-jongg players will use each year. The game became popular again in the 1950s and 60s, but lost momentum in the 70s.

In 2010, Ruth Unger, then the president of the National Mah Jongg League, told the Wall Street Journal in an article titled “Dust Off Your Game Table, Mah-Jongg Is Making a Comeback” that the game had lost a generation but was now up to about 400,000 members from 100,000 in the 1970s and early ’80s.

For anyone interested in joining a group, I advise finding players at the same level. So if you’ve never played, it’s best to find other brand new players the way my friend did. Even after five years, we still feel like advanced beginners and we learn new methods from more experienced players we know. Mahj includes some measure of luck, but there’s plenty of concentration and skill involved that takes years to master. We joke about going on one of those mahj cruises. We figure by the time we’re in our 70s we’ll be unbeatable or at least ready to take our show on the road.

One final point on the appeal of the game: Playing mahj creates a different sort of bonding between women than one can typically find in the post-college years. Our nights are simple. Whoever is available shows up at 7:00, sits down, and plays. We make time to kibbitz between and even during hands, but there’s also a complicated game to focus on and rules to follow. Our group has come together in hard times to send shiva baskets when any one of us has a death in the family (many of us have lost grandparents since we’ve been playing together). And we’re there with baby gifts in happy times.

I’ll never forget the day three years ago when the group presented me with my own mah-jongg set after my fourth baby was born. They knew I did not need one more baby item in my house, and I was thrilled to have a set to pass down in case one of my kids is interested or even (God-willing) one of my future grandchildren.