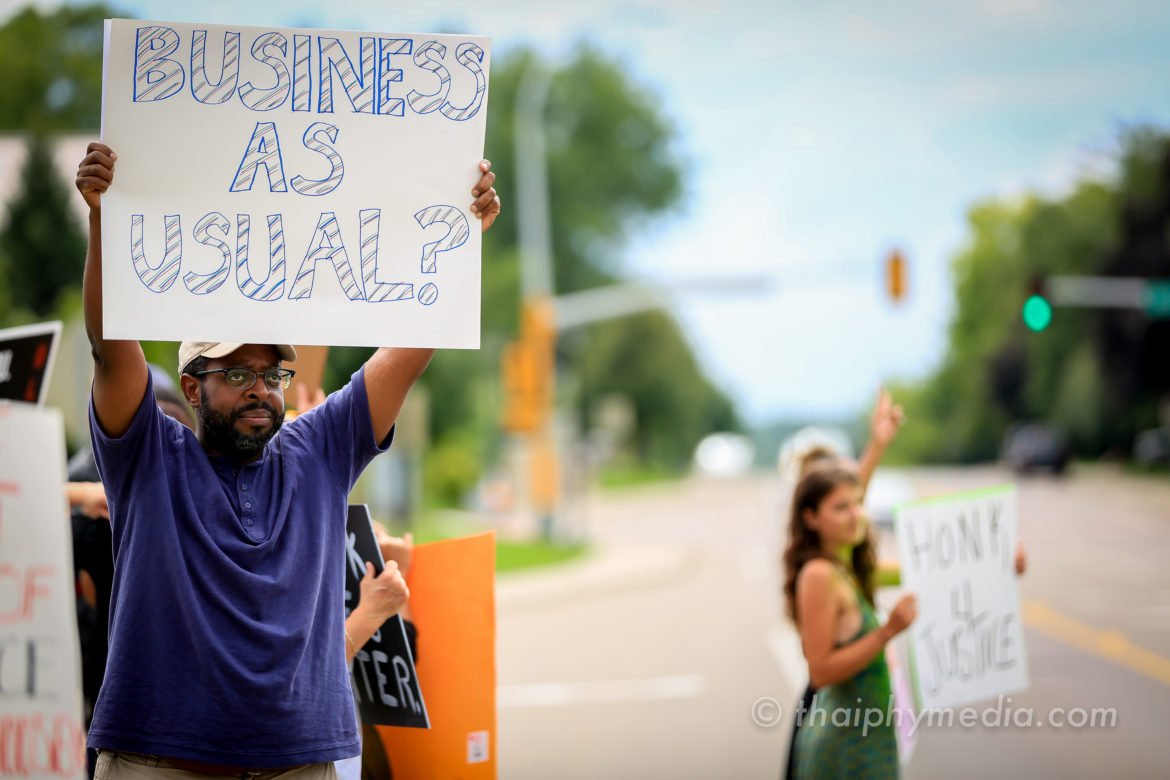 Michael Kleber-Diggs protests at the St. Anthony Police Department on Aug. 19 for the dismissal of Officer Jeronimo Yanez and for justice for Philando Castile. Photo by Thaiphy Phan-Quang.

I grew up in the 1970s and 1980s, raised by parents and grandparents who wore hats to church and always mowed their lawns. I was taught to dress a certain way, talk a certain way, and act a certain way, not only as a survival mechanism, but as a means of access. Go to college, I was told. Join a profession. Never get caught out with ashy elbows. Dress for success. I think about respectability every time the cues I send out get missed, every time the obvious evidence that I do things ‘the way I’m supposed to’ is overlooked. I think about respectability a lot.

A lot of people of color do. In a televised interview the morning after her son Philando was killed, Valerie Castile said, “I did everything right as a parent. I made sure my kids understood the difference in being law abiding and that the police were there to help.”

When asked to describe her son, she spoke with courage and dignity about Philando Castile’s life and his death, and I thought about all the ways we describe human beings. The things we would say without the task of proving respectability. The things we’d want said about us if a loved one was asked a similar question – what we liked, what we valued, the things that drew our friends to us and held them close, how we laughed, and that one scene in that one movie that always made us cry. Maybe they’d describe what we were good at or share something of our struggles. Maybe they’d feel they could do that without those traits being corrupted or misused.

When violence is visited upon Black bodies, many rely on respectability to determine whether or not the victim deserved some punishment. After acts of institutional violence, we wonder about what the victim was wearing or doing just like we do at sexual assault trials. When people of color die or are assaulted, too many folks search through their histories for evidence that they deserved it. This work represents respectability at its ugliest, investment in the idea that social acceptability is not granted to everyone. It’s something some people have to earn every moment of every day.

Kouren-Rodney Thomas was shot and killed earlier this month in North Carolina by the latest white man playing Neighborhood-Watch zealot, while “securing his neighborhood” from “hoodlums.” When asked about her son’s death, the victim’s mother Simone Thomas expressed surprise that her son’s clean living didn’t manage to protect him from being mislabeled and, ultimately, executed for the color of his skin.

“What can I say? Kouren was a good boy. He wasn’t dressed… with saggy pants or a do-rag or anything that people would call ‘hoodlums’ would wear,” she said.”There was nothing hood about him.”

She then wondered, “Would this happen to caucasian boys skateboarding up and down the street? Would they be called ‘hoodlums?’”

If the rule is, if you carry yourself well and conduct yourself like an upstanding citizen then you’ll be received in that way, then the inverse is assumed true by implication – to the extent a person experiences mistreatment, it probably has something to do with what they wear, what they drive, how they act, how they talk. This is a familiar inversion, one in which the acted upon becomes the actor. The victim becomes the one worthy of scrutiny and the aggressor is vindicated.

We’ve become overly comfortable with this thinking, dissecting what Trayvon Martin was wearing or what Sandra Bland said or what kind of car Philando Castile was driving. By contrast, officers meting out punishments on the street, too often receive very little scrutiny. This outcome is the result of respectability culture. Over time some of us have come to realize respectability is modern mythology – people will prejudge you anyway. Doing everything right, or respectably, will not save you.

In the 1960s, Blacks marching for equality in America learned this same lesson. Early civil right activists employed respectability as a tactic to gain sympathy from liberal white audiences and combat Jim Crow era oppression. In the early days of the movement Black people dressed up, spoke ‘properly,’ and took care to comport themselves like ‘decent’ folks. As the work wore on and the progress was slow, they realized it didn’t matter. Eventually, the Black Panther Party took a different approach, donning the uniforms of revolution to distance themselves from normative white respectability. Some Blacks drew their inspiration from African culture – afros made the scene, dashikis became cool.

Now, like then, every mention of dress or behavior – saggy pants or young people playing loud music – is, at its root, a conversation about respectability. When we wonder why kids won’t put on a belt and thin out the bass a bit, we’re encouraging them toward a particular flawed model. Our concerns can be received as a plea for prudence and as a desire to keep our young people safe. Sometimes it’s self-hate cloaked in an ‘uplift the race’ claim; some see the failure to dress ‘right’ and act ‘right’ as tainting the majority’s regard for people of color. Other times, pleas for respectability are meant as a deflection – a way to undermine the inherent worth of every individual, a lead up to an epithet like ‘hoodlum’ or ‘thug.’

What we never get around to asking is ‘why won’t the world just receive people as they are? Why is it OK to shoot someone because you’re frightened by their existence?’

When Philando Castile was killed, respectability featured prominently in how we weighed and measured the tragedy. Much was made of how Castile led his life. We were told how good a worker he was. His criminal records were scrutinized by cynics looking for felonies but finding none. His relationships were evaluated as was his style of dress and the kind of car he drove. In certain circles, shooting an unarmed person of color in front of a child is only awful if we can prove that the victim deserved to live. For them, respectability sources the right to draw air.

The first time I broke down over Castile’s death, I was on an elliptical machine at the gym. I’d gone to bed early the night before, two miles from where Castile was killed. I woke up to the news reported by friends via text messages and on social media. It took me a moment to gather myself in order to meet the demands of the day. When I spoke to William Eddins, a friend, Minneapolis-St. Paul resident and fellow father, he pointed to a paradox when dealing with the unknown.

“Many, if not most interactions today involve people I don’t know and people who don’t know me. The hard part then, is getting past the superficial assumptions we all have. ‘Oh, he’s Black’ or ‘oh, she’s a Muslim.’ Those assumptions color how we are perceived by most people,” he says. “Respect others rather than strive for respectability.”

When it comes to his two children, Eddins and his wife “have not shied away from discussing aspects of our society that, by nature, disenfranchise them,” and they both “stress that this is not how things should be.” Eddins says his children “are much more aware of themselves as they are, for better or worse.”

James Short, a Twin-Cities based technology consultant, has three children who have attended schools in the metro area. Speaking of his children, Short said “we have not talked about ‘respectability’ as such, but the nuggets of wisdom and truisms I try to impart are definitely culled from my sense of what it means to be respectable – honoring those who came before them and sacrificed on their behalf, their responsibility to their family, their forbearers and the world. Along with that comes the process of learning what it means to navigate the social constructs of a society that is invested in destroying them – and all the while, continuing to go about their business with a sense of determination and grace.”

Hawona Sullivan Janzen is a poet and curator. She has a daughter in high-school. Her thoughts about respectability “are closely tied to the way she was raised.” She was “taught that [she] should always put her best foot forward in her speech/grammar, dress/grooming, etc.” She was also told “that other Black people would give [her] the benefit of the doubt, that whites would not” and while she “would be forgiven for a bit of slang or an off-putting thought by Blacks, these were not things that could be said or expressed in front of whites.”

The conversations I have with my own high-school aged daughter are complicated by my own upbringing – what I can use from it, and what I disfavor – but also by my ardent desire to raise a child who loves her skin and refuses to apologize for who she is. I want her to be able to advocate for herself in the world with the same passion she displays when challenging authority at home, but I realize that message sends her out into a world not ready to receive her as she is. My message is bifurcated too. I tell her that in certain settings, you can do and say and dress and act however you wish, but when you’re in mixed company or out in the majority world, you need to know that you will be categorized quickly and harshly by people who have not yet learned to accept you as you are, by people who are not yet able to advocate for your right to exist without conditions or prerequisites.

All of this leaves me to wonder about conversations taking place in white households. I assume they aren’t weighed down by the same respectability requirements. I assume parents raising white children don’t have to discourage them from being goth or punk or arrogant or sassy. I also assume white parents raising white children are not worried that how their kids dress or the relatively benign things they say will get them killed. Not in the same way parents raising children of color are. But I also wonder whether they tell their children about how unfair the world is in this particular way, how blessed they are to dress and act and speak within a broader range, and how fortunate they are to be able to skateboard down a street in North Carolina or to demand fair treatment by the authorities or drive along Larpenteur Avenue on a summer evening with their beloved by their side and a child in tow cruising in a sufficient car that might happen to have a busted taillight. I wonder if they tell their children what a blessing it is to not be ‘perfect’ all the time but manage your way home alive anyway.