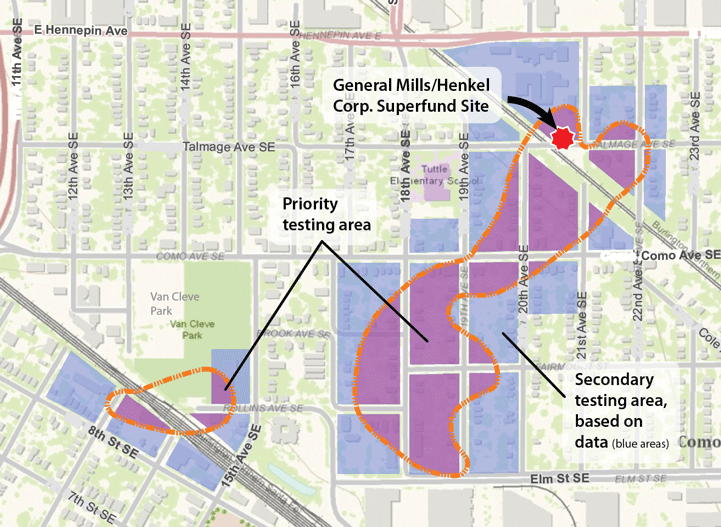 Some 200 buildings in the Como and Marcy-Holmes neighborhoods may be contaminated with toxic fumes from a chemical used by General Mills in a research center more than 50 years ago.

The chemical, trichloroethylene or TCE, has been detected in vapors escaping from the soil and could seep into the basements of homes, potentially causing various cancers and damaging immune systems, according to officials from the Minnesota Pollution Control Agency and the Minnesota Health Department.

UPDATE 12/8/2013: What’s new in the Como neighborhood / General Millls / TCE pollution story? Almost a month after the community meetings reported in this article, dozens of homes have shown problematic levels of TCE, two class action lawsuits have been filed, and testing continues. Click here for more.

The two agencies mailed notices to residents, called two public meetings and asked residents and building owners to provide access for contractors to sample fumes in their basements.

“I’ve lived here for 40 years and raised my two boys here,” said Rhona Leibel, who lives near Fairmont and 19th Avenue Southeast in the Como neighborhood. “One of my concerns is whether the MPCA knew about these dangers earlier. Why are we hearing about it now? Will they have problems from the exposure?”

Residents raised these and other questions at two informational meetings with MPCA and MHD officials in the afternoon and evening of November 12 at the Van Cleve Recreation Center.

Some residents cited deaths and illnesses that they thought may be explained by the contamination, but officials said the neighborhood’s rates of cancer and birth defects were the same as those in other areas of the city and state.

Officials admitted that they will not know the level of contamination until they take samples from under the concrete in people’s basements.

“We have only recently understood the problem of vapors from the soil,” said Sandeep R. Burman, MPCA manager of site remediation. “These patterns of the spread of vapors are things that are not well understood yet.”

Until the results are known, residents should avoid sleeping in their basements, said MHD toxicologist Rita Messing. The vapors could be coming through cracks and holes in basement floors.

“Vapor from contaminated ground water can enter the house through basement areas where there may be cracks in the foundation or the slabs, and the vapors can accumulate at levels that could be of some concern to health,” Messing said. “You can do laundry in the basement but don’t sleep there or stay there for long periods.”

Several people expressed concern that tenants, including University of Minnesota students, are renting basement apartments and that landlords may not provide access to inspectors.

Resident Steve Sworski said his neighbors were dying unusually from cancer. “I was worried about contamination of the soil coming into my house,” he said. “How many years ago? We have students living in the basements of these houses now. Your agency didn’t have the balls to tell anybody about the danger.” Sworksi said he has fixed his basement for his granddaughters to play there but now cannot let them use it.

Others asked who would be responsible for lower property values that may result from the hazards. Neve said he could not speak to legal issues, but he said if any contamination is getting into homes, General Mills is legally obligated to fix it.

General Mills had dumped TCE and other pollutants in a hole behind their building at 2010 E. Hennepin Ave. from 1947 to 1962; the company occupied the facility from 1930 to 1977. Groundwater contamination was confirmed in 1981 and a pump-and-treat system was installed in 1985 and ran until 2010. In the 1980s it had been declared a superfund site.

“The level of understanding at that time was that chemicals that were waste were dumped in the ground and they would go away,” said the PCA’s Hans Neve. “We know now that this doesn’t work. We did not know in 1985, but we know now that vapor can enter your home from contaminated soil.”

Neve said that General Mills will pay the cost of testing and mitigation of any danger, and the PCA will supervise the work.

The PCA collected 40 samples from throughout the neighborhood to determine “areas of concern” for more detailed testing within homes. “If you live in this area, your home should be tested,” Neve said.

For those who sign an access agreement, sampling could begin the week of November 18. Mitigation, if needed, will be started right away. Testing involves drilling a hole in the basement floor and taking samples of the soil underneath. If mitigation is necessary, the soil will vented through a pipe to the roof.

Test results could be mailed back to individual homeowners in three days, he said.

In testing homes, Neve said, the PCA will try to find out whether vapor has intruded into the house and sample the vapor directly below the basement floor. The results will be generated quickly, used for decision making, and determine whether indoor air has other contaminants from sources inside the home.

Messing said TCE can cause increased risk of heart defects in newborns and immune effects and it can harm children in utero, infancy and early childhood but the amounts that cause damage are unlikely. “Volatile organic compounds,” such as TCE, are solvents used in homes. “We have technology so the amounts of these chemicals you can detect are very low.”

More than 130 residents attended the afternoon meeting and just under100 the evening one at Van Cleve Recreation Center Park, which is one of the areas of concern. Although the evening meeting was smaller, the tone was more tense.

“My understanding of government and private business it that it’s not our responsibility every five years to go through a list of which websites I should check,” Leibel said. “As I understand it when I pay my taxes, it’s your responsibility to tell us that groundwater pollution is in our back yard. We needed to know that.”

Some complained about an apparent lack of transparency and others expressed suspicion of General Mills and the MPCA.

Joan Menken, former president of the Southeast Como Improvement Association and a neighborhood resident for 58 years, said she’s worried about the impact on young people and the long-term impact. “This is pretty short notice on something that is alarming to a lot of people,” she said about the meeting.

One resident asked whether the dirt in her garden was safe.

One resident just one block outside the area of concern said she was six months pregnant. Should her home be tested? Messing said she should call her at the health department.

Authorities compared the vapor to radon gas that occurs naturally in homes and can become harmful as houses are being more tightly closed for the winter. In homes requiring mitigation for TCE, the system will also clean out radon vapors.

Some long-time residents were familiar with superfund issues, including test wells throughout the neighborhood to monitor and clean up the groundwater since the 1980s, but others said they were angry they did not know they lived near a superfund site.

All the costs of testing and mitigation, if necessary, are covered by General Mills and the projects will be supervised by the MPCA.

People with questions about the project or the testing should consult the MOCA at www.pca.state.mn.us/wdwffra or call Fred Campbell at 651-757-2260, fred.campbell@state.mn.us or Hans Neve, 651-757-2608 or hans.neve@state.mn.us.

Buildings in the dark purple area should be tested.

Fred Campbell of MPCA explains map of “areas of concern” about TCE.

Eric Blodgett demonstrates how a test is taken.