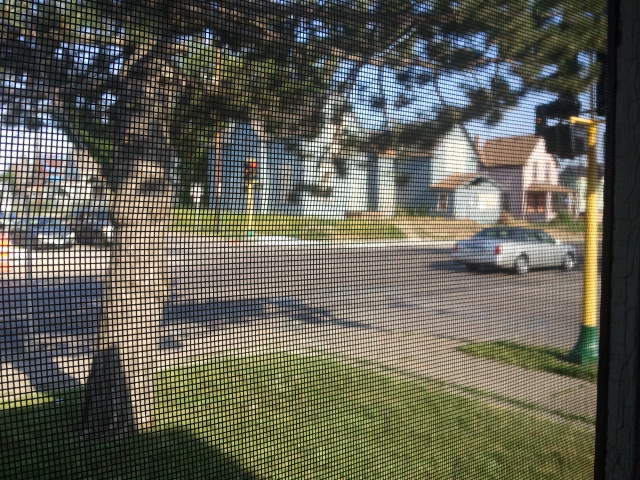 This was the question most frequently posed to me over the course of a few months when I would tell friends, neighbors, or colleagues that I wanted to buy the house at 2601 Penn, with “Are you crazy?!” and “Do you want to get shot?” as first and second runners-up. The answer to those questions (yes, a little bit and no, not even a little bit for the 2nd and 3rd ones) is partially that the preservationist in me wanted to be able to say that my house was one that would have been demolished if I hadn’t come along. The house had to be appealing on its own terms, but preservation was an important aspect of my homebuying process.

So much so, that on the day my offer was accepted I was at a Hawthorne Environment Committee meeting, and everyone was asked, “What’s the greenest thing you did today?” as part of the introductions. Everyone else said things like, “I walked to the store instead of driving,” or “I recycled a pop bottle.” I took full advantage of a situation where no one could top me, and said, “I just signed a purchase agreement on a house that would have otherwise been demolished, and saved a few tons of debris from winding up in a landfill.”

But where most might see a run-down dump on the verge of demolition, I saw a cute little bungalow that could be restored. Even those who wish the northside didn’t have image problems with crime said this intersection was too dangerous to live on. I was reading city plans for separated bike lanes on 26th, the potential for light rail or streetcars on Penn and Broadway, and a beefed-up transit corridor along Penn. And I saw a can’t-miss opportunity.

Other people saw two ugly blue houses kitty-corner to this one and thought those needed to come down and I…okay, I had to agree with them on that one.

Several days later, I was at a city function where we were discussing what The Next Big Thing would be for north Minneapolis. At my table, I had just excitedly informed colleagues that I was looking to buy a home on 26th and Penn. As expected, I encountered the barrage of why there/are you crazy/do you want to get shot? questions. I tried explaining how it wasn’t as bad as they thought, that the tornado taking out some buildings actually made it BETTER, and how the intersection was primed for redevelopment with bike corridors, LRT or streetcars, ramped up bus service, and business development.

Before I could finish my neighborhood sales pitch, we were asked to stop our discussions so that Mayor Rybak could give a speech. And where did he say was the area of north Minneapolis that was primed for redevelopment opportunities? 26th and Penn.

He began that speech by saying a measure of success in north Minneapolis would be when a kid could wake up one morning, get on his bike and take 26th Avenue to either Theo Wirth Parkway or the Mississippi River. As RT was laying out a vision for that intersection, described many of the same things brought up earlier in this post. My colleagues at the table were flabbergasted that somehow I knew about what the mayor was going to say, and bought my house at the perfect time. I didn’t have inside information at all. I do, however, read a fair amount of city planning documents and knew of at least some of these proposals.

The more interesting discussions came a few months later though. By the time this year’s DFL Senate District Convention rolled around, rehab work on my house was well underway. All throughout the convention, I had people coming up to me and saying how great my house looked and how cute it was going to be when it was finished. However, many of these people had told me only a month or two earlier that the place should be torn down.

This is an important dynamic to note. Looking at a dilapidated house and seeing its potential is not something that everyone can do. How many times have we as a community given up on a house because we as a community failed to envision its rehabilitation? How many blocks in our community have we ceded to crime and blight because we didn’t see or act upon the possibilities that were right in front of us? How many people, especially young people, do we give up on because we think that somehow they are beyond salvation?

And this is the meaning that this area has come to take on–that we CAN turn things around, that we can make things better. Since I’ve moved in though, I’ve gotten to know folks at the bus stop and my neighbors, and the block isn’t as bad as I thought–certainly nowhere near the lawlessness others had projected upon it. So who wants to live at 26th and Penn? People who can see the block for what it is and what it will be.

By the way, there are two houses next to me that are for sale. I just thought you all should know that.