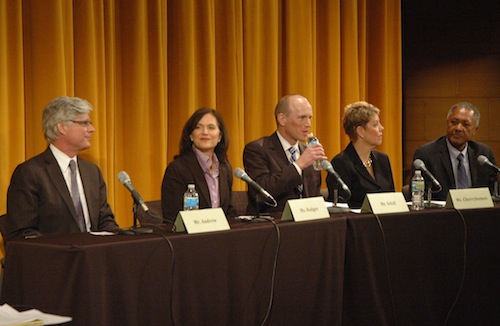 Full debate - thanks to The Uptake!

UPDATED 3/29/2013: It was a battle of the progressives on Wednesday, March 27 at the Humphrey School as five remarkably similar progressive candidates showed off their feathers in a packed auditorium.  There’s a lot to like about many of the candidates, so we’re breaking it down to find the winners and losers on various issues, such as who hates the stadium the most, who’s the BFF of North Minneapolis, and more.

Who hates the stadium the most?

The stadium issue divided the current City Council, and the drama continues as a campaign issue. Incumbent council members and mayoral candidates Betsy Hodges and Gary Schiff both opposed the stadium, while council member and candidate Don Samuels supported it, saying that it would create jobs.

“It was clear that the stadium was going to be built,” Samuels said. “Minneapolis was going to get run over or get on board.”  He joined the mayor and the majority of the council in order, he said, to create employment in the community, as well as tax relief. He also said it would save millions of dollars on unemployment for Hennepin County.  “Let’s pay for people to get back to work.”

As for Mark Andrew and Jackie Cherryhomes, they both said that Minneapolis needed to get behind the stadium, but that it was in the wrong location and both opposed using gambling to help pay for it.

Of course, no one’s arguing for a hole in the ground, and whatever reservations any of them had, they all say they are going to be the biggest advocate for making sure Minneapolis gets the best deal going forward. But as for who just hates the stadium the most? Between Hodges, who “opposed the stadium strenuously,” and Schiff, who arguably was louder about his opposition while it was going on (at least from this reporter’s perspective), I’m going to go ahead and give it to Schiff.

Who’s the BFF of North Minneapolis?

All of the candidates just love North Minneapolis and have got lots of ideas about how to bring jobs and vitality to the area. Schiff says he’s going to start at the grassroots level and get rid of unnecessary regulations to allow small businesses to thrive, and Hodges says that even before she was on the city council, she was trying to find ways that southwest Minneapolis could become “genuine allies to the north side.” She wants to work with the philanthropic community, and believes transit decisions are going to be crucial in order to connect people from North Minneapolis to other parts of the city and to jobs. Andrew, who also lives in Southwest, says he’s going to create a blue ribbon task force to attract companies, and possibly manufacturing, to come in and create livable jobs. He also says creating green space, water and amenities is crucial.

But who’s got the most North side cred? That has to go to either Cherryhomes or Samuels, both of whom live in North Minneapolis, and had competing horror stories. Cherryhomes related a story of hiding in a closet with her daughter while being burglarized, and Samuels talked about how many times his life has been threatened.  Cherryhomes was quick to say that solutions need to come as a result of listening to the people who actually live in North Minneapolis, and pooh-poohed the 100 green homes of the Green Homes North project. “We need to fix the homes we have,” she said.

Samuels, who defended those green homes, said the biggest thing is for the return of the middle class to North Minneapolis, and that gentrification was not a bad word. I’ll say it’s a tie between these two.

Who’s got the best plan for paying for all this stuff that we want?

So we want economic development, improved transportation, parks, amenities, etc. How do we pay for all this stuff? Cherryhomes says that not all of this stuff has to cost money, citing her own experience working with Bill English and the University of Minnesota to identify businesses to entice to the Twin Cities. “This is already happening,” she said. “It’s not a costly matter.”

For Samuels, the trick is to decide to make a dramatic change, and “the resources come,” giving the example of the Northside Achievement Zone, run by his wife, Sondra Samuels, where he says neighbors got together and decided they were ready for change. Their efforts, which were initiated “before Promise Neighborhood was even a concept,” ultimately resulted in a $28.5 million federal Promises Neighborhood grant, he said.

Schiff plans to create jobs without subsidies, by getting rid of waste in city hall, and by streamlining regulatory services. As an example, he gave the seven microbreweries that have opened in Minneapolis as a result of changing city statutes. “No subsidies, just suds,” he said.

Hodges thinks we need to “fight hard for the relationship we have with the state,” she said as well as making sure that we have a growing property tax base.

Andrew takes credit for leading the coalition to build the Midtown Greenway as a revenue source. “People thought I was doing it as an environmental program,” he said. But in fact, it has led to a doubling of property taxes along the popular city feature. “Other people were looking at a trench and they were seeing whiskey bottles. I looked at it and I saw a park.” He plans to do more of the same as mayor. Clearly, he wins this round.

They all are! While none of the candidates really answered how they are going to cut down the five-year waiting list for Section 8 housing, which currently has 10,000 names, all of the candidates talked about how they were the candidate to solve homelessness in Minneapolis and create more affordable housing in all parts of the city.

Andrew called affordable housing in Minneapolis “a difficult and profound problem,” and talked about his work while on the Hennepin County Board of Commissioners.  Cherryhomes said she’s the only person on the panel who actually has experience creating housing.

You know what? I don’t think anybody wins this one. This is an “I’ll believe it when I see it” situation.

Who is the most against property tax increases?

Let’s not forget that just last fall, the current city council voted to get rid of the Civilian Review Authority, (Hodges and Schiff both voted against the overhaul, along with Elizabeth Glidden, Cam Gordon and Robert Lilligrin, however.*) That being said, at the forum, all the candidates talked about how important transparency is in law enforcement — and they pretty much all just love current chief of police Chief Harteau.

Andrew wants to have transparency, but thinks there should be tougher sanctions on repeat offenders. Hodges said she was a strong advocate for the Civil Rights Department, and was part of the work group to reform the CRA. She said that certain officers are making the rest of the force look bad, so that residents don’t feel safe going to the police. Cherryhomes said that when she was on the council, she was critical of the police department, based on anecdotal incidents, but soon learned that the police needed to be her partner. She was active in establishing the CRA initially, she said, and we still need to have such a body. Schiff voted to eliminate the CRA, but said he had voted against the weakening the Civil Rights Department. Samuels said a corrupt cop is a stain on our community, and that we need to work on trust, and that the police need to police themselves.

Who won this round? I guess Cherryhomes, for helping start the CRA. Can we get a new one please?

Who’s going to bring in the most jobs?

Surprise, surprise — all of the candidates say they are going to bring jobs to Minneapolis. Their answers were all pretty similar, but there was a lively exchange between Cherryhomes and Samuels. After Cherryhomes said she wanted to hire a job czar for the city and Samuels saying he wanted to be the jobs czar. We assume he didn’t mean under her administration. He wins that round, for the best zinger.

So who’s the most progressive?

Hard to say. They all seem pretty progressive, depending on how you define being progressive. My gut instinct says Schiff.

Who’s the most charismatic?

This is a tough one. Samuels is a clear winner on the eloquent speech category, having a dramatic voice that goes into poetry at times. Andrew is charming, for sure, and comes across as pragmatic. Cherryhomes definitely has a “person in charge” vibe to her. She struck me as a powerful force. But then there’s Schiff, who almost got me to clap at one point (before I remembered I’m not really supposed to do that as a journalist) when he talked about the outdated drug laws (and I don’t even do drugs!)

Oh, man. It’s hard to tell. They are all very similar. One thing’s for sure. I can’t imagine any of them crowd surfing.

CORRECTION 2: Thanks to Mark Warren, Gary Schiff’s campaign manager for pointing out an error in this article as originally written. In fact, both Schiff and Hodges voted against overhauling the CRA.