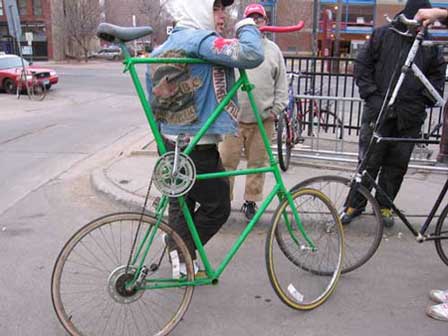 Last week I reported that the city of Mineapolis is looking to regulate tall bikes. Tall bikes are made by welding two conventional bike frames together.

I talked to a city employee who explained to me that he had received complaints about the tall bike riders. He asked a city attorney to research whether there were existing statutes that would apply to tall bikes. He also expressed concern that the tall bikes were unsafe.

The city attorney found a state statute that said a street-legal bicycle needs to be low enough to be straddled with at least one of the rider’s feet planted firmly on the pavement. The law also required a bicycle to have a brake. These regulations may not extend to bike trails in parks.

Officials hope to clarify the city policy on regulation and enforcement of tall bikes in the coming weeks.

I decided to see for myself whether tall bikes were as unsafe as the city official I talked to claimed they were.

I biked over to the Hard Times Cafe which is where tall bike riding members of the Black Label Bike Club meet. I talked with several members of the club about the city’s plans to regulate the tall bikes. They shrugged and said it was nothing new; they were used to being ticketed and having their tall bikes confiscated.

I asked them if the tall bikes were unsafe. They said tall bikes were actually safer because of the increased visibility to both the rider and motorists. They also said that in the event of a collision with an automobile, a tall bike rider would more likely fall onto the hood of the car or fall clear rather than be thrown under the wheels of the car.

They also explained that some tall bikes had brakes and some didn’t. They pointed out that many of the standard-sized, fixed-gear bicycles, which are becoming more popular, don’t have brakes.

I was given a demonstration how tall bicycle riders easily stop and dismount. I made a small movie and you can see for yourself here.

It isn’t clear what would be gained from a crackdown on the tall-bike riders. They seem determined to ride their bikes at all costs. Police enforcement of a tall-bike ban will likely be a wasted effort at a time when serious crime is on the rise.

The Black Label tall-bike riders reminded me of the descriptions I’ve read of bicycling in the 19th century, when nearly all bikes were tall. Often referred to as “penny-farthings,” the popular tall bikes of that time were fixed gear and most did not have brakes. If the Black Label bicyclists sported handlebar mustaches and straw boaters instead of piercings and tattoos, the city would likely celebrate them as re-enactors of Minneapolis’s colorful bicycling history.