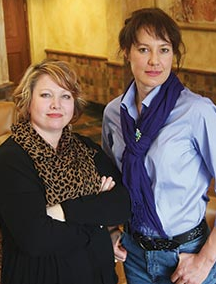 A man and woman are in the car ahead, and the car has a veteran’s license plate. Which one is the veteran?
Most people would identify the man. But maybe this time it’s the woman. As the number of women in the military grows, so does the number of women vets.
Life in the military can be hard for women. Like that license plate response, the military system was created with men in mind. Modifications for women are an afterthought. Service women often feel disrespected and devalued, and many face discrimination.
When Trista Matascastillo got out of the military in 2008 after 16 years of service in the U.S. Navy, the Marines and the Minnesota Army National Guard, she found that the Veterans Administration and other veterans support services had big gaps when it came to women’s needs. She formed the Women Veterans Initiative (WVI) Working Group to address those gaps – first assessing whether these gaps were perceived or real and then looking at ways to fix those very real problems. The group continues today, providing support, resources and a voice to Minnesota’s nearly 30,000 women veterans.
“Advocacy is a huge part of it,” says Matascastillo, who is the WVI’s chairwoman. She is also is program officer for the Veterans’ Voices program of the Minnesota Humanities Center, which seeks to provide a more complete narrative of veterans in Minnesota through performance, art and community recognition. “Our goal from the front is how can we have a seat at the table in the designing and planning of anything” so it’s clear that all vets are welcome.
In addition, the WVI aims to elevate the status of women veterans, educating the community that women are veterans too and recognizing – valuing – women’s service.
Not your husband’s service
A major victory for the group came in January when Minnesota’s first woman veteran license plate became available. Designed by Angie Batica, media relations officer for the WVI, the plate depicts the silhouette of a woman wearing a military-style cap, with her hair in a bun. It clearly displays the words “Woman Veteran.”
The special license plate, approved by the Minnesota Legislature last April, is the product of four years of effort, with many women describing their experiences driving a car with veteran plates.
“[People] never think it’s your car,” Matascastillo says, as people in grocery-store parking lots have often thanked her for her husband’s military service, assuming he’s the veteran, not her. “There are so many women that haven’t been recognized at all. It’s a start,” she says.
The WVI is now turning its political sights on improving women’s experiences in the service, backing policies that show women are respected and valued. A key part of that is changing the way the military – and specifically in Minnesota, the National Guard – treats military sexual trauma.