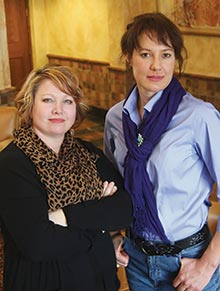 A man and woman are in the car ahead, and the car has a veteran’s license plate. Which one is the veteran?

Life in the military can be hard for women. Like that license plate response, the military system was created with men in mind. Modifications for women are an afterthought. Service women often feel disrespected and devalued, and many face discrimination.

When Trista Matascastillo got out of the military in 2008 after 16 years of service in the U.S. Navy, the Marines and the Minnesota Army National Guard, she found that the Veterans Administration and other veterans support services had big gaps when it came to women’s needs. She formed the Women Veterans Initiative (WVI) Working Group to address those gaps – first assessing whether these gaps were perceived or real and then looking at ways to fix those very real problems. The group continues today, providing support, resources and a voice to Minnesota’s nearly 30,000 women veterans.

“Advocacy is a huge part of it,” says Matascastillo, who is the WVI’s chairwoman. She is also is program officer for the Veterans’ Voices program of the Minnesota Humanities Center, which seeks to provide a more complete narrative of veterans in Minnesota through performance, art and community recognition. “Our goal from the front is how can we have a seat at the table in the designing and planning of anything” so it’s clear that all vets are welcome.

In addition, the WVI aims to elevate the status of women veterans, educating the community that women are veterans too and recognizing – valuing – women’s service.

Not your husband’s service

A major victory for the group came in January when Minnesota’s first woman veteran license plate became available. Designed by Angie Batica, media relations officer for the WVI, the plate depicts the silhouette of a woman wearing a military-style cap, with her hair in a bun. It clearly displays the words “Woman Veteran.”

The special license plate, approved by the Minnesota Legislature last April, is the product of four years of effort, with many women describing their experiences driving a car with veteran plates.

“[People] never think it’s your car,” Matascastillo says, as people in grocery-store parking lots have often thanked her for her husband’s military service, assuming he’s the veteran, not her. “There are so many women that haven’t been recognized at all. It’s a start,” she says.

The WVI is now turning its political sights on improving women’s experiences in the service, backing policies that show women are respected and valued. A key part of that is changing the way the military – and specifically in Minnesota, the National Guard – treats military sexual trauma.

A culture of sex

About one in four women experience unwanted sexual contact in the military, ranging from inappropriate touching to rape, according to government statistics. Matascastillo confirms this with anecdotal evidence and her own experience being assaulted. She believes it’s closer to three in four women.

Jill Troutner, the WVI treasurer and a West Point graduate, agrees. “I was so used to it, it had to get really extreme for me to even take action.”

When she was on active duty in the Army, Troutner stacked empty pop cans at the entrances to her tent so if anyone came in during the night, she’d have a few seconds of warning. The 5-foot-9 self-described jock said that if she was feeling vulnerable, she’d hit the free-weight room to throw around some weights with the guys.

“I always wore my clothes too big, because if you wore your clothes that fit too well, you were a temptation,” Troutner says.

“Because we blame the victim, right?” interjects Matascastillo.

“So you always wore everything big and loose and you can hide behind it,” Troutner continues. “You try to make yourself as androgynous as possible and don’t call attention to yourself.”

Look unattractive. Know where exits are. Avoid going places alone. Look for cameras in the showers, bathrooms and locker rooms. Choose footwear for its defensive properties. (A veteran Matascastillo knows still sleeps with her shoes on.) It’s survival skills like those, plus some feistiness, that offer women a little protection.

Yet both Matascastillo and Troutner are adamant that women should join the service and stay in. “We absolutely need women in the military. That’s how it’s going to change the whole system,” Matascastillo says. “Because until women are in the infantry in leadership positions, nothing will change. It’s the only way to get a woman on the Joint Chiefs of Staff.

“Imagine how things will change when women are in charge,”

The perp next door

In the meantime, the WVI is doing what it can from the outside to change the system, which currently is focused on the victim.

In Minnesota, the women’s veterans group is focusing its efforts on how perpetrators in the National Guard are handled. Currently, when a National Guard member reports sexual assault by another member, a special Guard team out of Washington, D.C., investigates the allegation, Matascastillo says. The Minnesota National Guard does not have to report allegations or even military convictions to civilian authorities.

To Matascastillo and others, that’s a huge problem.

“Even if they’re convicted in the military of sexual assault, civilian authorities are never alerted,” says Matascastillo. “So that means that your neighbor who goes to drill on the weekend and decides to rape someone on the weekend can come home – he’s a perpetrator, and you’ll never know that you have a sex offender living next door.”

The WVI wants to strengthen Minnesota law so that civilian authorities must be alerted and given jurisdiction over sexual assault cases. The result would be twofold – the public would know who these offenders are and perpetrators would be held accountable for their crimes – and the group hopes that this would stop perpetrators from offending again.

Changing the “chain of command” system would send an important message, Matascastillo says. “It’s the same message as the license plate – it’s about values, that we value the service that women provide.”

Indeed, much of what the WVI stands for is valuing and respecting women and supporting and meeting the needs of the women veteran community.

But according to Matascastillo and Troutner, such a community doesn’t exist inside the military. While in the service, women generally don’t bond with other women. There’s a sense of competition, Troutner says, which is fed by their superiors comparing them with other women rather than with their male peers. “You never felt like you could trust them,” she says of other women.

“We never build each other up,” Matascastillo adds.

Troutner notes that she didn’t have friends, just mentors and mentees. “I was so isolated; I just felt so alone,” she says.

Troutner and Matascastillo, who now call each other “Battle Buddies,” even served in the same Minnesota National Guard unit at the same time and never met each other. They wonder what changes they could have made if they had. “Now that I know Jill, I would do it again, if we could go in together,” Matascastillo says.

The WVI hosts Coffee Talks at Lucy Coffee Cafe in St. Paul where women can network and talk without men present. The drop-in events are held the third Monday of the month from 5 p.m. to 8 p.m.

In addition, the group provides Sister Assisters for women visiting the VA medical centers in Minneapolis and St. Cloud. A woman can request a trained escort who will help her navigate the building, sit with her in the waiting rooms and greet her when she finishes her appointments. Men and women share waiting rooms and, even here, harassment can be overt. Having another woman present deters unpleasant exchanges with other veterans and comforts patients who may be going through tough times. Some women request a Sister Assister every time they go to the VA.

In the end, the Women Veterans Initiative is about helping women function and cope with life after the military. Some challenges carry over into the civilian world, like succeeding in a system designed for men and fighting discrimination. Other challenges, including the aftereffects of military sexual trauma, can create problems of their own. The WVI is willing and prepared to help others heal, move forward and remain hopeful.

TAKE ACTION:
• Contact your legislators. WVI has joined with several groups to back stricter laws on sexual assault. And WVI is pushing the Minnesota National Guard to change how it handles sexual assault cases. WVI members also have rallied on behalf of the U.S. Equal Rights Amendment. Matascastillo says much of what they’re working for would be covered if the ERA were ratified. (To find your legislator, go to www.gis.leg.mn and select “Who represents me?”)
• Donate. Checks can be sent to the group’s office at 550 Rice St., St. Paul, MN 55103.
• Recognize women veterans. Watch for the new license plates and take time to thank veterans – women and men.

BY THE NUMBERS:
• Nearly 30,000 women veterans in Minnesota
• 2 million U.S. women veterans
• In 2012, 6.1 percent of active-duty women and 1.2 percent of active-duty men reported unwanted sexual contact in the past 12 months.
• In fiscal year 2014, ending Oct. 31, there were 17 investigated cases of sexual assault in the Minnesota National Guard; 5 cases are on the books already for fiscal year 2015.