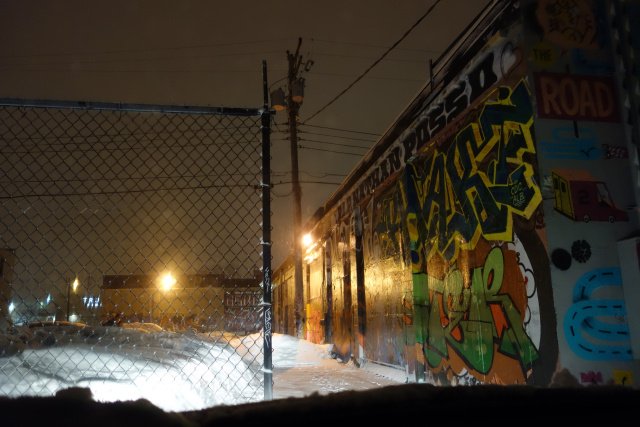 There is a kind of losing where everything is found. It struck me with some force the other night listening to the writers reading for Intermedia Arts Queer Voices series that many of the authors were writing about loss. Some wrote with humor, some with anger, fatigue, tears and acceptance. One wrote about the loss of his long hair while searching for the haircut that would express who he really felt he was. Another wrote about the loss of a special group of friends who came together as pioneering lesbian parents only to lose that bond as their children grew up, others wrote about the loss of religion and the loss of health to HIV and cancer. But there was also a sense that through that loss some essential things were found and acknowledged. Not only was a sense of self affirmed but also a sense of humanity, as children, parents, loners and lovers.

Queer Voices: A GLBT Reading Series, hosted at Intermedia Arts offers a “safe space,” a place for voicing everyday stories without fear of negative criticism or censorship, “internal or external.” On March 18, co-curator John Medeiros (co-curator Andrea Jenkins was out that evening) welcomed the crowd to the “longest running series of its kind in the nation.” He explained that the goals of the series are to build a queer community through literature, by sharing writing with an audience and engaging in community dialogue. He opened the reading with a poem from his book Couplets for a Shrinking World.

To describe people as queer seems to say they are different. In her story about the experience of celebrating New Year’s Eve in a crowded Iowa bar years ago, Pam Colby described the perception not that she was different but rather that everyone else in the place seemed alien. That seems to me to be an important difference. For some it may come effortlessly, for others it is a struggle, but eventually it’s important to realize that it’s about a point of view. What makes you seem different to others is what makes you feel right. 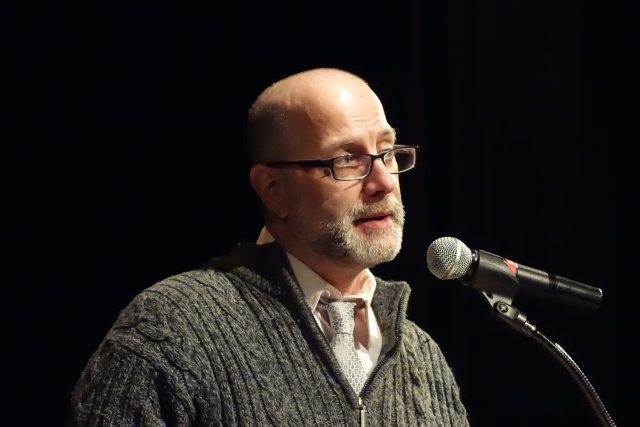 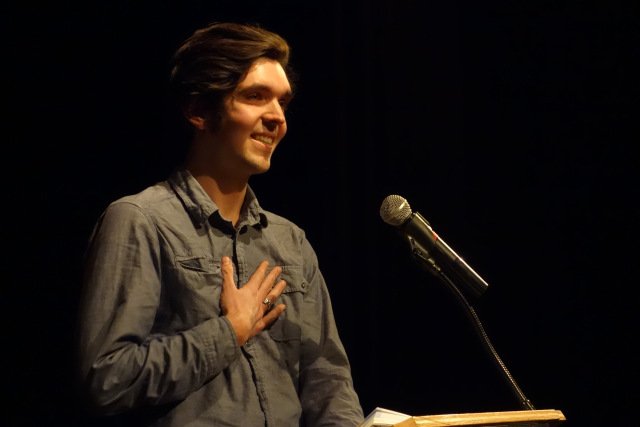 These queer voices are changing the world, eroding the boundaries that make some people feel so different. Kevin Hershey read movingly from his story “Wafers” about growing up in the Catholic church and being supported by his father who says one day, “I cannot be part of a church that doesn’t love my son.” These intersections where people meet each other with compassion are where we really learn who we are.

That was overwhelmingly brought home by the range of voices and experiences performing the evening of March 18. There was humor, eloquence, and a strong undercurrent of knowledge that “coming out” is really about finding something, gaining something and about becoming–with power, magnitude and grace– who you really are. 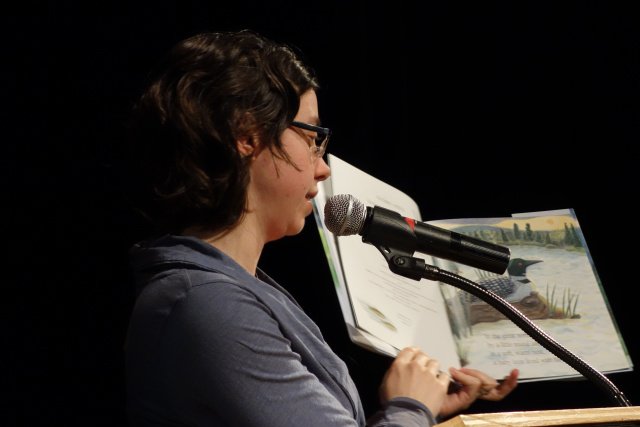 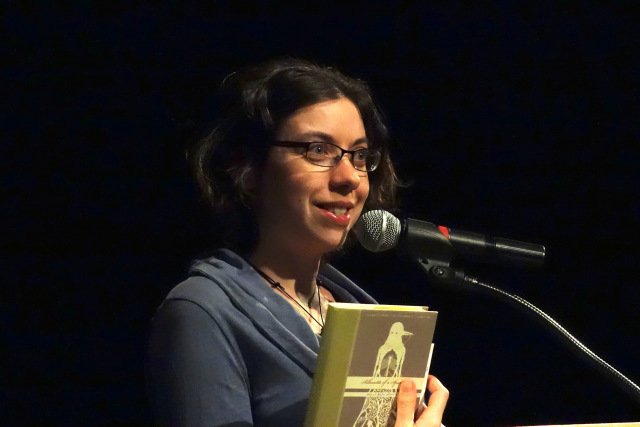 Molly Beth Griffin, graduate of Hamline’s MFA program, writes for children and adults. She read from her picture book for children Loon Baby (Houghton Mifflin in 2011) and from her book Silhouette of a Sparrow (Milkweed 2012), a queer novel for young adults (with some gorgeous papercut cover art by Elsa Mora) inspired by the Excelsior Amusement Park. 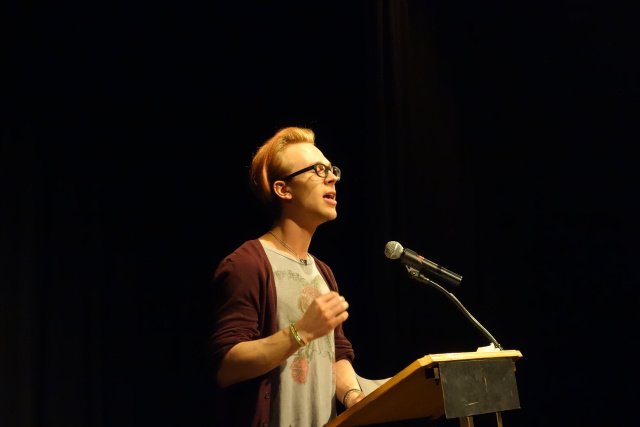 Cat Hammond read “My Hair Piece” a humorous, expressive story about a boy who “aspired to androgeny” and combed, cut and dyed his hair until he finally felt it expressed the truth of how “s/he” felt on the inside. Cat is a writer and performer who performed recently with 20% Theatre Company’s The Naked I: Insides Out. 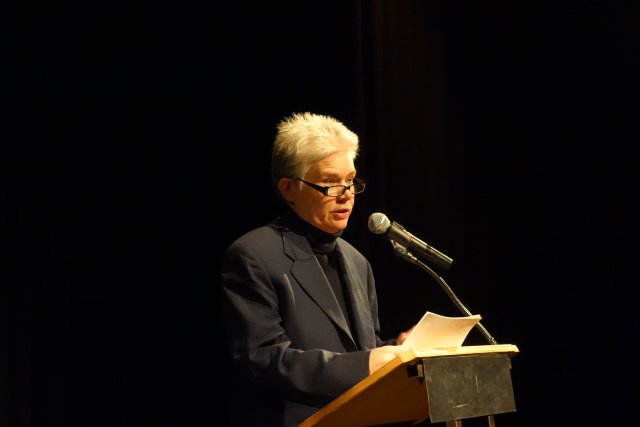 Pam Colby, producer, writer and director of the documentary Not in My Lifetime

Pam Colby, a producer, writer and director whose current project is a documentary about marraige equality titled Not in My Lifetime (read more about her film work in the Twin Cities Daily Planet or at colbycreative.net) read a story about a friend Gloria, lost and found again after many years, and several poems about raising children, bad dates and marriage equality. 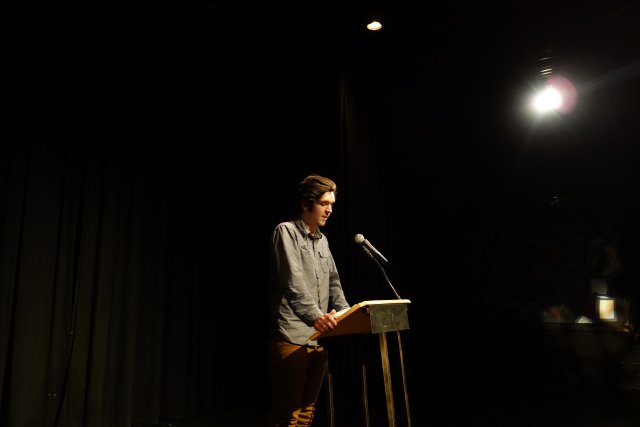 Kevin Hershey reads a story never read out loud before 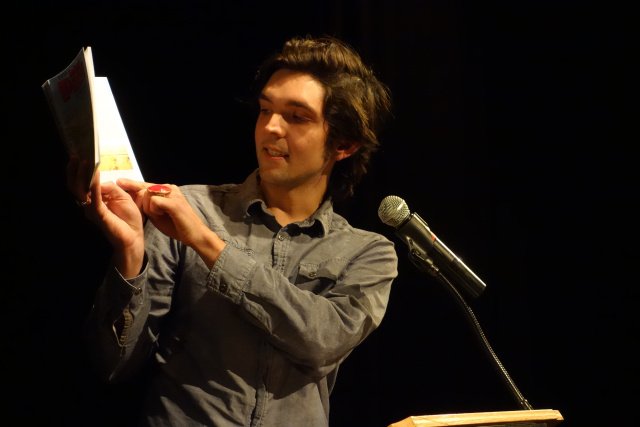 Kevin Hershey, a young social activist, and emerging writer of promising talent, read a piece that had “never been read before by anyone but me.” The piece described the vulnerability, confusion and strength he experienced during a serious illness that forced him to make decisions many people avoid for a lifetime. He also read from his piece “Wafers,” first published in the 2014 edition of the Saint Paul Almanac. 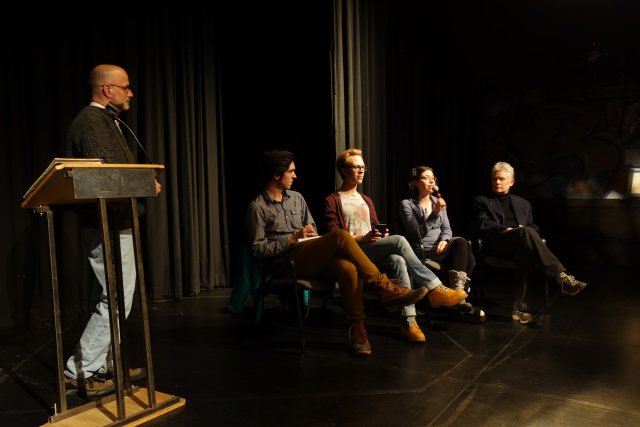 The authors gathered on stage for a friendly Q and A session with an appreciative audience, “hungry,” as one audience member put it, “for stories that reflect our reality.”

Upcoming events: The next reading will be on May 27. For more information check out the Intermedia Arts Page: Queer Voices: An LGBT Reading Series.