Whenever the discussion goes to higher taxes for the wealthiest Americans, we hear that it will impact the job creators. The assumption is that the wealthiest portion of the population will create more jobs if they have more money. It sounds great but the reality is something totally different. Successful businesses do not create jobs just because there is money available. They create jobs when there are customers available. This is true of retail, and manufacturing. Any successful business expands when there is an opportunity for more business and profit.

I think most of us understand that an important part of our economy and even the world economy is the spending of consumers particularly the American consumer. This American consumer is all of us, but some segments are more important than others. We often hear about the importance of a strong middle class, but actually we should think of a stronger bottom 90%. This group, although they have lower income, there are more of them and they spend a larger portion of their income, usually injecting it back into the local economy. To get some idea of the importance of this bottom 90%, The Wall Street Journal reported in January of this year 534,465 cars were sold in the US of those only 74,336 were luxury cars. Do you think more jobs were involved in building and selling cars to the 90% or the top 1%?

There are multiple reasons for this shifting of wealth from the bottom 90% to the top 1%, but two big ones are the shrinking tax rate on the wealthy and their rising share of the nation’s income. Economists Thomas Piketty and Emmanuel Saez published their work about income inequality in the Quarterly Journal of Economics. Chart 1 from their work shows the Federal Tax Rate by Income Group from 1960 to 2004. The chart is very busy, but it is easy to see that the top .5% saw significant tax cuts during this period while taxes increased a small amount for the rest of the population. 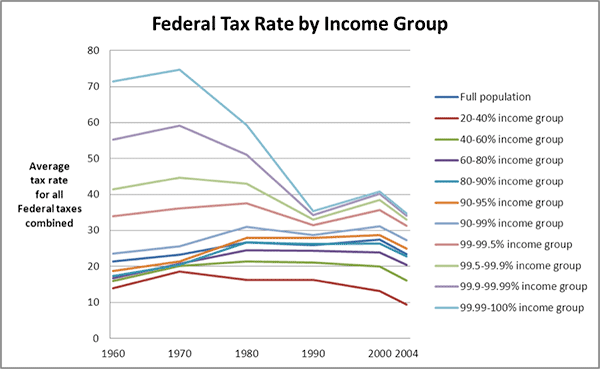 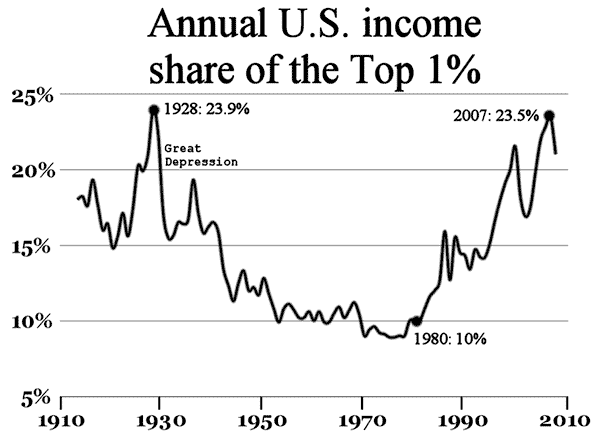 When the issue of the growing wealth of the top couple percent of the population, the terms often heard are: Fairness, Class Warfare, Socialism, etc. It is time to get away from name-calling and realize this growing wealth of the rich at the expense of the bottom 90%; is bad for the Country, the Country’s economic health, and the vast majority of the population. To address this inequity will require many changes, but some places to start would be the following.