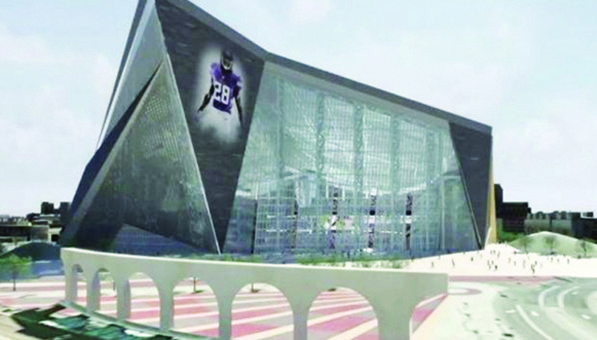 While there is much talk about possible delays in the construction of the “People’s Stadium,” it appears that the Vikings and MSFA are still confident it will be built. And according to a recent Associated Press (AP) article entitled, “Many already cashing in on Vikings stadium,” lots of white collar professionals have already profited from the proposed stadium.

Incidentally, it appears at this point that the only people who may be left out of the benefits are people of color.

Despite lots of compelling testimony last Friday at the Minnesota Sports Facility Authority (MSFA) meeting by several prominent African Americans and Somali leaders, it was all but ignored. Practically all of the media outlets in the Twin Cities were in attendance, but none reported [as of yet] or followed up with the testimony of the Black folks who were complaining that it appears that Blacks may yet again be left out of a major development project. 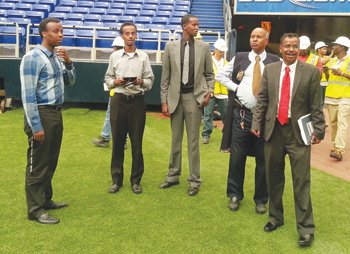 Right: Abdizirak Bihi, at right in foreground with red tie, with others from the Somali Education and Social Advocacy Center and Summit OIC students in the background who hope to be included in the stadium construction project (Photo by Avi Viswanathan)

MSFA Board Chair Michelle Kelm-Helgen, who seemed a bit annoyed by the testimony, did respond. She voiced her concerns that the public testimony part of the meeting was going on too long and that speakers were not sticking slavishly to their three-minute time limit.

“I always worry when we have a process and we don’t follow the process,” said Kelm-Helgen.

Ironically, speakers were complaining about the failure of the MSFA to follow a process that has already been mandated by the Minnesota legislature, which is to make sure that an Employment Assistant Firm (EAF) is hired to facilitate both the recruitment and hiring of minorities for the construction of the Vikings stadium.

An RFP for this Employment Assistance Firm was issued in April, and the unified community response was submitted in May. Despite lots of assurances of commitment to employment equity goals, a contract has not been negotiated although construction is scheduled to start November 7.

“We were assured that we would be intentionally included,” complained Alfred Babington Johnson. Babington Johnson’s Stair Step Foundation has come together with a conglomerate of other training, employment and outreach organizations to form one Employment Assistance Firm, ostensibly to ensure outreach and job training activities across multiple communities of color.

“This hopeful narrative has become a sad story and has the potential of becoming a nightmare,” Babington Johnson said. “History records too many promising chances to employ our marginalized in a meaningful way that have been frittered away through a combination of intentional strategies and poorly informed decisions that result in unintended but negative consequences.”

“Something is always being worked on, but we are never included. We are seeing the same scenario in which we come to the table, but nothing ever happens,’ said Abdizirak Bihi of the Somali Education and Social Advocacy Center, a partner in the proposed EAF.

Merrick Training Center (East St. Paul) Director Dan Rodriguez also spoke during the public comments time and said that the project should benefit those who need it the most. He said this is an opportunity that should not be passed up to train community members who have historically been left out.

President of the Minnesota National Baptist Convention and pastor of New Salem Baptist church Reverend Jerry McAfee asked,” Of the millions of dollars spent on this project, how much is being spent with us [the Black community]? Historically, said McAfee, “these types of projects set lofty goals but don’t follow through.”

The AP article reports that the Sports Authority is already paying a $25,000 a month as a law firm retainer, plus hourly fees. Engineering assessments have cost $10,000. Hammes Company Sports Development could earn $9.8 million plus expenses, and if the project is cancelled they would be due a $340,000 termination fee. M.A. Mortenson Construction, the stadium’s general contractor, is due a $12.5 million base fee and stands to make an additional $2.5 million if they finish the stadium on time.

The MSFA has also been negotiating a side deal to invest $65 million in a parking ramp and green space that will be located adjacent to the stadium.

Adding to the frustration of the communities of color is what some have termed an attempt to lowball the Employment Assistance Firm. The organizations that comprise the proposed EAF have estimated that, to ensure enough workers are recruited and trained over the approximate three-year life of the project, at least $2.5 million would be needed. The MSFA at present has said they are willing to commit about $700,000 to the project, which is less than one percent of the over $900 million stadium budget.

HIRE Minnesota responded to this funding gap in an Insight News editorial last week, written by Ralph Wyman. “The agency is suggesting that it can throw a few hundred thousand dollars towards workforce development and think they can achieve [according to an earlier quote by the Authority] ‘a lasting legacy of a larger minority and woman construction workforce.’ If money talks, then right now its saying parking over people.”

Kelm-Helgen promised that the contract with the proposed EAF will be signed on September 27, a little more than a month before construction is scheduled to start. Members of the EAF are crossing their fingers that the very tight windows of opportunities for trained workers will not be missed by the lateness of the agreement.

HIRE Minnesota said in a press statement citing the problem of the delayed signing that, “failing to provide adequate funding for training and procrastinating the signing of a contract will mean that Somali construction trainees will not be prepared in time to meet project requirements for certain skilled workers. For example, if pipe fitters are needed in November but their training doesn’t end until December, they would have missed their window of opportunity.”