I was wrong – and happily so. The September jobs report shows a net gain of 109k jobs, far ahead of the 40k predicted in Barataria. The August job growth figure of no net job creation at all was revised up (yes, up!) to 57k jobs created that month. Clearly, whatever happened at the end of the summer was a bump in the road.

Being wrong is no crime as long as you learn from it. So let’s go through and figure out what must be happening to miss so badly.

The net job creation figure is a relatively small number found by subtracting two large numbers, so the potential for error is high. Unemployment initial claims, the only figure we get in real time week by week, ran nearly 1.7M over the month of September. In order to get a net job growth of 100k that means that 1.8M jobs were created. An error of just 5% in the monthly survey that tracks job creation would make it appear that there were no jobs created at all. That’s the first problem – the data are inherently noisy.

The other problem is that I assumed that job creation is relatively static, not changing much from one month to the next. That is a position consistent with being at the bottom of the cycle where there is little to no change. Clearly, we are in a very dynamic economy with a lot of job creation and destruction going on simultaneously. The restructuring to the next economy is occurring all around us. It’s a good thing.

It doesn’t get us to the creation of the jobs 14 million people need right now, but it gets us moving. A solid 8-12 million jobs are still needed to have a labor market that is reasonably in balance with the ebb and flow of net job creation, when there would be a net gain of more on the order of 500k per month or better.

What is fueling the change in job growth? Buried at the end of the monthly jobs report is the average workweek, now up to 34.3 hours. It takes a lot of time to update the figures, but we can see from this graph stolen from an excellent article last May by Northern Trust: 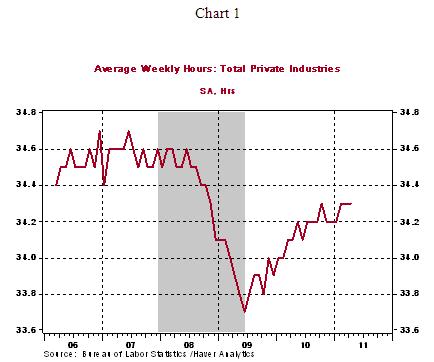 Employers are slow to hire employees but the work is piling up. There is work out there.

Why aren’t employers hiring more rapidly? There are three important reasons. The first is that they aren’t confident that the work will keep coming in, so they are careful to hire. Better tracking of temporary employees would help us monitor this situation, but there is nothing even close to real-time data on the temp industry right now – a major failing as we work to understand the new economy that is coming which will surely have a significant temporary worker component for a long time to come. The second possibility is that overhead per employee has increased, making it more expensive to hire, which is probably not true at all – but efforts to decrease this barrier to entry in the job market would be the most significant government policy and leadership change that would help us to move forward.

The third possibility is much more sinister and full of political implications. Corporate profits can be increased by working employees harder. Certainly, profits are fairly solid in 2011. A spooky stock market always encourages big companies to watch hiring closely as a way of managing their largest variable cost – especially in service industries that are more employee intensive. There is little doubt that this is part of the equation, but we can’t be sure how much.

The net result is that some jobs are being created and there is work for people to do. It is simply not enough to get us quite to the level necessary for a stable labor market yet. There is a lot of reason to believe that the Obama administration is watching the stubbornly high Unemployment Initial Claims, a measure of job destruction that comes in real time. If job loss fell just a few percentage points the net job creation calculation, subtracting two big numbers to get a rather small number, would look a lot better.

For now, it’s good to be wrong. Things are moving along. They just have to keep at it.