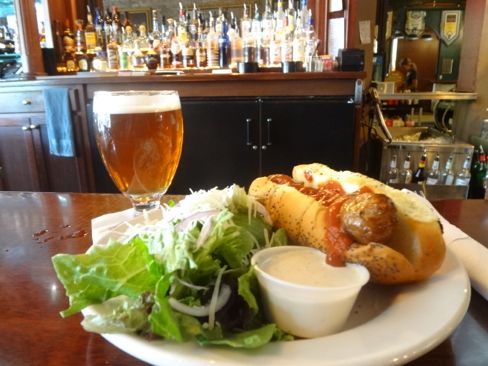 Maybe I had better explain. I don’t really want warm, flat weak beer. All I am really looking for is a proper pint of English bitter, brewed and served the way it’s supposed to be. That is, moderate in alcohol, naturally carbonated, and served at cellar temperature.

I have been delighted by the explosion in local breweries, and the launch of all these new gastropubs with dozens of beers on tap. The arrival of so many new beers, and the revival of so many classic brewing styles, gladdens this hophead’s heart. Every time I see a new pale ale or IPA on a tap, I think back to the time when I first fell in love with English beer, on a twelve-week sojourn at Oxford, a dozen years ago. I was on a journalism fellowship, so it almost goes without saying that I spent much of my time in pubs, where I had a chance to acquire a taste for – and it is an acquired taste – English bitter.

At the right temperature, the best of the English bitters leave just a little hint of aromatic hop resin on the palate. You taste it on your lips, and it speaks to you.  It says, “maybe we better have one more round, shall we?”

But when I taste these new American craft brews, most of them are perfectly decent on their own terms, but they don’t deliver that English beer experience. Proper English bitter is served at cellar temperature – a cool 52 degrees or so. American domestic lagers, by contrast, are served chilled – like 38 degrees. But the colder the beer, the less you can taste their flavor components, (which in the case of beers like Coors, Bud or Miller is actually a good thing.)  And at most of the bars I have been too recently, even the craft beers that are brewed in English styles are served at American temperatures, i.e., much too cold.

And another thing – the typical beers drunk in English pubs are called “session beers” – beers with 3-4 percent alcohol by volume. That’s a level at which you can have a few rounds over the course of a session, and still stagger home at the end of the evening without doing yourself too much damage.  Hardly any of the new American craft beers are being brewed with less than 5 percent alcohol, and far too many of them are in the 7-9 percent range. That changes the whole dynamic of beer as a social beverage, and I think it’s a shame. 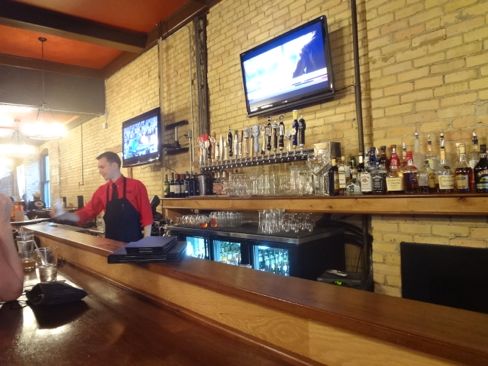 My first stop on my quest for cask-conditioned ales was the Devil’s Advocate, a charming little 40-tap gastro-pub in the space at 89 S. 10th St. in downtown Minneapolis that formerly housed Hell’s Kitchen and a couple of more short-lived ventures. “Gastro” might be stretching things a bit, as the menu is built around meatballs – beef, pork, chicken or felafel. You can order one on a bun ($3), or multiples with fries, polenta or pasta, plus side dishes that range from braised southern-style greens to a chopped salad or broccoli rabe.

The beer list is impressive – it changes from week to week, but all the major styles of craft beer seem to be represented – Belgian Trappist ales to Cologne-style Koelsch, Dortmund Alt, Pale Ales and IPAs and more. The nightly happy hour, from 3 to 7 and all day Sunday, features $3, $4, and $5 taps.

So far, so good. But when I asked the bartender about cask-conditioned ale, he proudly pointed to their Dragon’s Milk Ale, from Michigan’s New Holland Brewing Company. Dragon’s Milk is aged in oak barrels, but in every other respect, it’s pretty much the opposite of what I was looking for – it’s pumped from a keg using carbon dioxide, served chilled, and ridiculously high in alcohol (10% a.b.v.). And a bit on the sweet side, as well.

Next stop, one of my favorites, Republic, 221 Cedar Ave. S. at Seven Corners. To avoid disappointment, I checked first online, and was encouraged to read that they “put a thoughtful, seasonal rotation of local and emerging American craft, Belgian, and German beers into 56 taps. The 57th tap rocks it old school with a traditional beer engine from which we serve cask-conditioned ales. We hand-pick breweries and styles with painstaking care parallel to making a mix tape for a high school sweetheart.”

I clicked on the full beer list and saw a very impressive roster, with the new Minnesota breweries well represented: Fulton, Harriet, Surly, Steel Toe, Brau Brothers, Lift Bridge, and even one I had never heard of – Indeed Brewing. There was nothing on the site to indicate what they were pouring from that 57th tap, but that only whetted my appetite. So I jumped on my bike and headed over. Sorry, the bar tender told me, that’s only on Wednesdays and sometimes Fridays. And maybe not this Wednesday, either. Maybe not until after Labor Day. 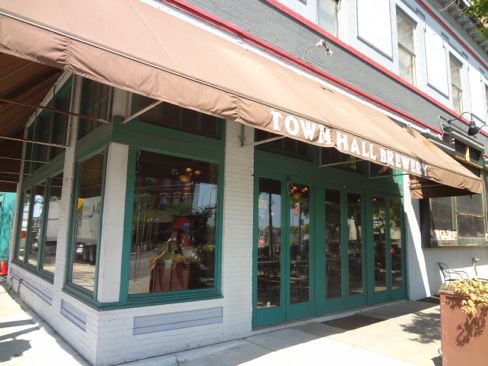 I found success, at last, right across the street from Republic at the Town Hall Brewery  where I was delighted to discover not one, but two cask conditioned beers – a Masala Mama IPA, which was about as close to perfection as I hope to get in this lifetime, or at least on this continent. It was hand-pumped, served at cellar temperature (52 degrees), and wonderfully hoppy. At 6 percent alcohol, it was a little too strong to count as a session beer, but that’s okay. (Their other cask-conditioned beer, 1800 Old English IPA, was less memorable.) To accompany it, I ordered one of the house specialties, a 1/3 pound bratwurst specially made for Town Hall by the Seward Co-op, ($6 for one, $10 for two) with a side salad ($1 extra) with a dressing of ranch dressing made with the house stout.

Satisfied but still curious, I stopped by two more brewpubs on my way home – first the Rock Bottom brewery in downtown, where they brew a variety of beers on the premises, and feature one or two at a time, hand-pumped. Unfortunately, I learned from the bartender, these are served chilled, at the same temperature as all their other beers. Final stop, Herkimer’s, where the bartender didn’t know what I meant by cask-conditioned. After I explained, I found out that all their beers are served chilled, and pumped up using CO2.

Later that evening, I added one more destination. Great Waters Brewing Co. in downtown St. Paul. Great Waters offers an impressive assortment of house-brewed beers, and serves more cask-conditioned, cellar-temperature ales than any other place in town – at least that I have discovered. Three of their cask-conditioned ales are always available – their Great Waters House Ale (5%), Square Deal Mild Ale (4.6%) and a Black Watch Oat Stout (5.8%) which bore a passing resemblance to Guinness.  A fourth beer engine is devoted to seasonal brews – that evening, it was a strawberry fruit beer, which I didn’t sample.

All three of the beers I sampled at Great Rivers were well-crafted, but neither the House Ale nor the Square Deal Mild quite hit the mark for me – I prefer my ales a little more aggressively hoppy. I only had a couple of sips of the Black Watch Stout, but it seems to merit closer investigation.

My thanks to beer blogger Michael Agnew of A Perfect Pint for his suggestions. 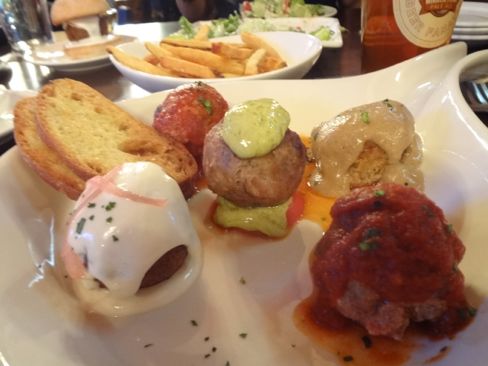 The meatball sampler at the Devil’s Advocate. 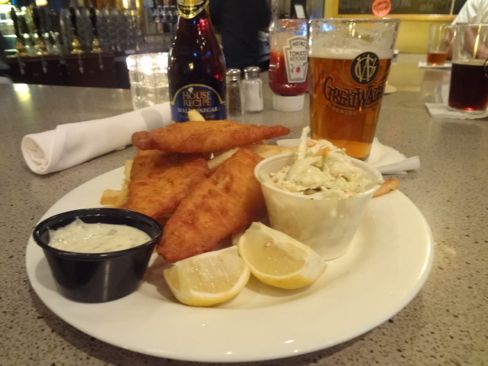 Fish and chips and House Ale at Great Waters