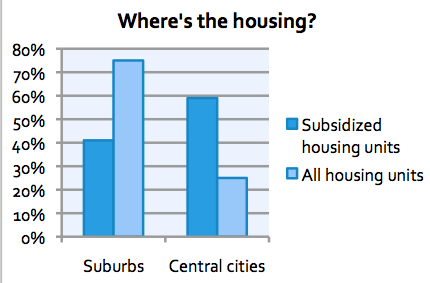 Rising rents and low vacancy rates shut out lower-income families in the Twin Cities. Add to that the worst disparity between non-Latino white people and people of color living in poverty in the top 25 metropolitan areas, and a legacy of housing segregation. Now, what’s an equitable policy for distribution of scarce housing subsidies and for building affordable housing?

One way policy makers look at equity is through the lens of Racially Concentrated Areas of Poverty (RCAPs), or areas where at least 50 percent of the population are people of color and at least 40 percent of the people are living in poverty. Experts differ on whether the solution lies in drawing people of color living in poverty out of those isolated areas, or whether its better to funnel resources into RCAPs.

According to Myron Orfield, Director of the Institute on Metropolitan Opportunity at the University of Minnesota, the overconcentration of affordable housing in areas where there is a high percentages of people of color and poverty is problematic. He says that the practice reinforces segregated communities, which in turn leads to segregated schools and creates other problems.

When he speaks out against placing more subsidized housing in RCAPs, however, Orfield encounters resistance. “There’s a big infrastructure of nonprofits that really like to build affordable housing in poor neighborhoods,” Orfield said.

In some cases, Orfield said, suburban areas such as Dakota County have applied to build affordable housing, but nonprofits based in Minneapolis and Saint Paul “are lobbying to keep it in poor neighborhoods,” in what he characterizes as a “housing segregation complex.”

“In the central cities, subsidized units are highly concentrated in neighborhoods along the I-94 corridor—areas with high concentrations of low income people and people of color. Although subsidized units are more scattered in the suburbs, the bulk of the units are in inner suburbs, near to the central cities—areas which generally exhibit more poverty than other suburban areas and which are more likely to be in racial transition.” Reforming Subsidized Housing Policy in the Twin Cities to Cut Costs and Reduce Segregation, p. 3

According to Orfield, housing is often less expensive to build in white suburbs than central cities, where “it costs twice as much to build and rents are higher,” Orfield said.

Orfield is also wary of the amount of affordable housing build along the Central Corridor. “Adding lots of affordable housing in Frogtown is in nobody’s interest,” Orfield said, adding that he doesn’t believe Frogtown will be gentrified, and that the process of gentrification is more likely to happen around areas near the University of Minnesota.

Ed Goetz, from the Center for Urban and Regional Affairs, also at the University of Minnesota, said that he and Orfield agree that suburbs and white communities need to be doing a great deal more to develop low-income housing. “There’s a clear need for making more opportunities available where there are relative shortages,” Goetz said. “There are all sorts of good reasons for that.”

Where Goetz and Orfield disagree, Goetz said, is that he believes that there are enormous needs for affordable housing in core parts of the metro area where there are high concentrations of people of color and people living in poverty.

Many people, according to Goetz, “are not living in decent subsidized housing — they’re often living in crummy housing with bad conditions and paying exorbitant amounts.” For Goetz, we can’t simply halt efforts to improve those areas because stopping will continue patterns of poverty.

While Goetz doesn’t deny that there are indeed concentrations of poverty, “not all the segregation and concentration of poverty we have has to do with unfair and illegal barriers in the housing market,” he said. “Some portion reflects people’s preferences to where they want to live.”

In other words, not everyone wants to live in a white suburban area. “Myron has integration as a goal,” Goetz said. “My goal is choice in the housing market. That means choice to remain in this neighborhood. These imply slightly different approaches.”

“What these communities lack is political power — amenities and investments that more advantaged communities have,” Goetz said. “None of this is rocket science. We need to work to improve condition in those communities. It’s not about moving people around.”