Thanks to MN2020 reader Kim L for a suggestion to map out the freight rail routes on which up to nine trains a day traverse Minnesota, each carrying 3 million gallons of North Dakota crude oil, nearly all of it on the way to far distant refineries.

“As someone who lives fairly close to a rail yard in St. Paul and can periodically hear trains rumbling past my community, I have often wondered what the trains are carrying and what kind of risk our community is being exposed to on a regular basis,” Kim commented my recent article about the new rush of black gold through the Gopher State. “Only when Minnesotans see the scope of the problem (and how close it is to their community) will they act.”

Well, with invaluable help from Dave Christianson at the state Department of Transportation’s rail office, we’ve learned that as many as seven of these tanker trains may run near Kim’s home virtually 365 days a year. They pass through many Minnesota communities on Canadian Pacific and Burlington Northern Santa Fe tracks from our western border through St. Cloud and the Twin Cities to Prescott, Wis., and La Crescent, Minn. Several others run south through Willmar toward Sioux Falls, S.D.

According to Christianson, “a few trains a month” peel off from the main lines to supply refineries at Pine Bend and St. Paul Park in the southern Twin Cities and in Superior, Wis., via Brainerd. 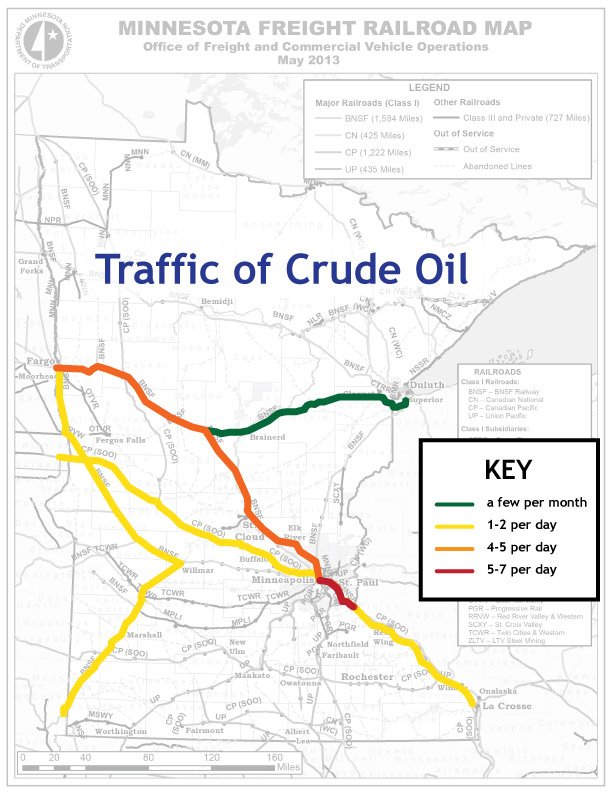 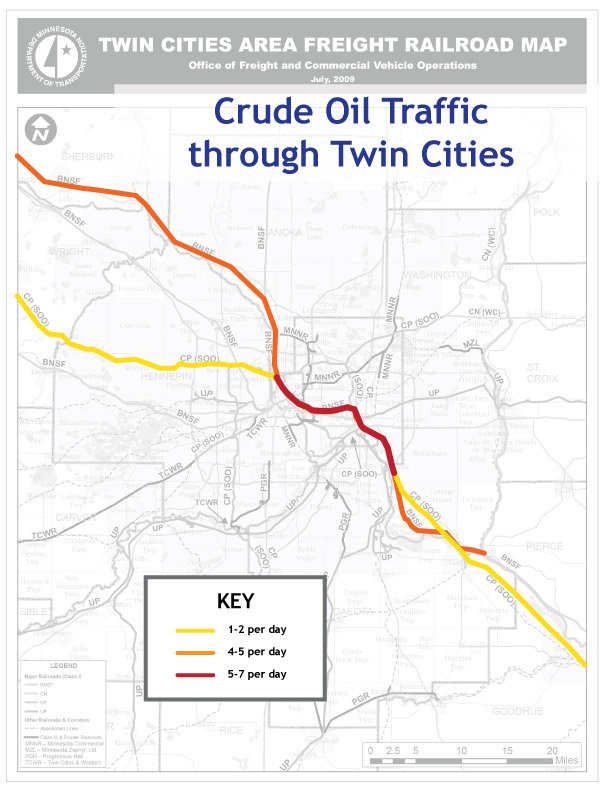 Huge explosions and fires on trains carrying Bakken Shale Formation oil in Casselton, N.D., near the Minnesota border, and in Quebec in the past six months have understandably heightened concerns hereabouts, where 80 percent of the Bakken crude that doesn’t fit into pipelines is being through-shipped by rail.

Last week, the mayor of Chicago, a transit point for many oil trains from Minnesota, proposed a national hazardous freight fee on such shipments. Rahm Emanuel said the money could go to rail safety improvements, emergency preparedness and reinsurance for communities hit by rail disasters. At a U.S. Conference of Mayors meeting in Washington, D.C., he said the idea was supported by mayors of Kansas City, Madison, Milwaukee, Philadelphia and Peoria, Ill.

Also last week, the National Transportation Safety Board recommended that oil trains be rerouted around populated and sensitive areas where possible, and urged tougher audits of railroads’ ability to clean up big spills and properly mark hazardous loads to assist firefighters.

The railroads already are taking extra safety precautions in the wake of the Casselton and Quebec disasters, including limiting oil trains to 50 miles per hour (down from a standard for freight of 65 m.p.h.), reviewing training, communications and dispatching procedures and paying more attention to accurate marking of tanker contents and real-time reporting when locomotive cabs are locked and hand brakes set during downtimes. In Quebec, 47 people died when a train that had brought Bakken crude through Minnesota broke away downhill unmanned after brakes weren’t set, then crashed and exploded.

“There are no guarantees, but they’re trying to operate in the safest way possible,” Christianson said. “The railroads still have a sterling safety record going back decades. They are safe.”

We sure hope so. As pointed out before, federal rules governing railroads make it hard for Minnesotans to address directly any perils coming down the tracks. That said, it’s still worth knowing where those perils are.