Heading into the new Legislative session at the start of the new year, we can expect that things are going to be different. The DFL is in control of the House, Senate, and Governor’s office for the first time since 1990 – and comes in with a lot of pent-up demand from their own interest groups. Attention tends to focus on social issues such as universal marriage, but we predict here that most of the time will be focused on the budget.

As discussed here, there is a structural imbalance of $1B per year obscured by a 2002 law that restricts how the forecasters are allowed to figure the state’s budget (though this is not without controversy – see the comments). We can predict that this will be plugged primarily by flattening out tax rates and making the highest earners pay a similar rate to most of the state, 12.1%-12.3% of defined, taxable income. And we have determined that, on balance, Minnesota is a remarkably average state in terms of its total size (represented by combined state plus local income) and net tax burden.

But what about expenditures? How does Minnesota compare with the rest of the nation?

The Census Bureau puts together a comprehensive balance sheet of state, local, and combined income and expenditures every year. The state and local combined are the most fascinating because this is the only source for reliable data in a consistent format. Combining state and local together is only fair because state laws in Minnesota and across the nation tends to regulate how local governments can raise taxes and operate. This also represents a “bottom line” to taxpayers, evening out local government aid and all the other strange effects that vary from state to state. It takes time to put this data together, so the most recent year available is 2010.

That’s how we arrived at the conclusion that Minnesota is a very average state in terms of income – 9.0% of Gross State Product (GSP) in total taxes (ranked 21st), 4.0% from the Federal Government (34th) and 4.1% from fees and other collections (32nd) with an overall take of 17.1% (30th). Nothing stands out in particular in the way we collect income.

Expenditures are also given in the same tables. Government buys a lot of different things – education, public safety, roads, social welfare, financing, and many little details. There are a lot of strange things that are run by government that no one ever thinks of, such as public utilities (water and sewer, sometimes electricity), municipal liquor stores, and so on. It’s all in there in this “bottom line” of total government.

Given that there are a zillion little things that add up, this analysis was forced to punt back to basics. The new Legislature will be looking to either cut or expand certain categories of spending – and some of them are so small that a major change would hardly register. For the purposes of this post we’ll look at the big ones – leaving more than a quarter of the total state and local expenditures (everything 2% or less) in a big catch-all we’ll just call other.

It’s not pretty. But it gives the big picture. 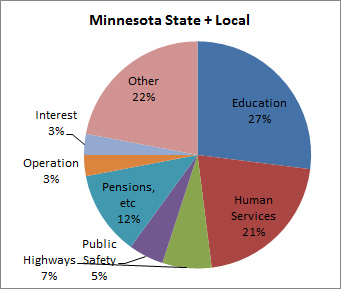 On the left we have the picture for state and local expenditures in 2010 as realized by state and local governments combined – $55.9B total. The largest category is education, with 27.4% of the total spending. Of this, 17.5% of total expenditures go to K-12 education, 7.8% to higher ed (colleges, trade schools, etc) and 2.1% to other things like adult education. Human services represents the next highest category, at 21.0% of the budget, which includes all the nursing homes, assistance to vulnerable adults, and so on. This also includes cash “welfare” payments, which at $700M is 1.3% of the total expenditure. After that, total unemployment insurance, pensions, and so on are 12% of what Minnesota spends. Highways are next at 7%, followed by public safety (police, fire, and corrections) at a total of 5%. It gets really thin after that, with nothing else higher than 3% of expenditures.

For the nation as a whole, the averages are not all that different. Expenditures on education are about the same, 27.6% on average (rounded up to 28%!). The average expense on human services is quite a bit lower, only 15% of expenditures, and Minnesota also spends a bit more on roads (due to the weather, no doubt). But given that we’ve established that overall Minnesota is a very average state in income, and like nearly all states the budget has to be balanced every year, the differences are miniscule. Even debt service is the same, about 3% of the overall picture.

What does this mean for the new legislature? If Minnesota is looking for a place to cut, human services does stand out as the only area that is much higher than the national average. But given our overall status as a very average state it’s hard to argue that the expense on taking care of each other is killing us.

Should we cut state government? Expand it? No matter what we do, any change would be a potential deviation from about what everyone else does all across the nation, at least on average. Any significant change would require a lot of attention to the small details buried in “Other”, which is to say it would hardly make the headlines until the final number is announced.