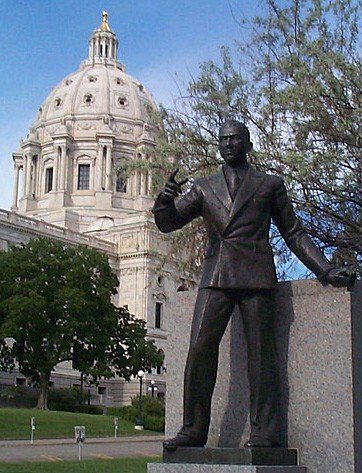 The Minnesota Legislative session is less than a month away. With the DFL in control of the House, Senate, and Governor’s office for the first time since 1990 we can expect that, at the very least, everything will operate differently than it has in a long time. This is a good time to look around and back to a complete understanding of the state of the state budget. The most contentious parts have always been taxes, so we should start with them.

As noted before, there is a structural deficit of $1B per year that is hidden by some awful gimmicks. Fixing that gap will likely be easy, but it begs for more fundamental reform that Governor Dayton is eager to implement. Before we get too far into it, two obvious questions stand out – where does Minnesota government income stand in relation to other states as well as where we have been historically?

There are many ways to represent the state of our state. I have always found that the most fair way is to look at all state and local government combined. Local government is constrained by state law in how it can raise revenue and in many of the services it has to provide. It is best to look at the overall system as a kind of “bottom line”. When looking at income, the entire state plus local picture is the most complete overall.

Similarly, since we do tax nearly everything, the Gross State Product (GSP) is the broadest and best measure of the state to compare our government’s income to. GSP includes household income, business income, and every aspect of Minnesota’s economy. It is also useful for adjusting other states’ data for comparative purposes.

The most complete data comes from the Census Bureau, but the most recent data present on state and local governments is from 2010. It allows a comparison across all the states by adjusting for GSP uniformly.

There are three main sources of income for state and local government. Money comes in from the Federal Government, from taxes of all kinds, and from various fees for services. The last category includes all the tuition, bills paid at county hospitals, and so on from every kind of fee you can imagine. Ranking all the states’ incomes from these categories as a share of GSP in 2010, we find some interesting results – show here just for Minnesota and neighbors:

Compared to other states, Minnesota is low on money from the Federal Government (34th in rank), rather average on taxes (21st) and low on fees for services (32nd). Overall, the total size of state and local government is on the low end of average (30th). Compared to our neighbors, Minnesota’s government is smaller than any except the parsimonious South Dakota.

This may surprise many people who are used to complaints about the size of Minnesota’s government. That case has always been greatly exaggerated for political purposes, but it is also true that taxes have shrunk somewhat over the last decade of largely Republican control. The following chart has data going back to 1998, a good benchmark because it was towards the end of the period when the classic DFL last had much influence – when Arne Carlson was the moderate Republican Governor. It shows how the mix of incomes for the combined state and local system has changed – but just a little bit: 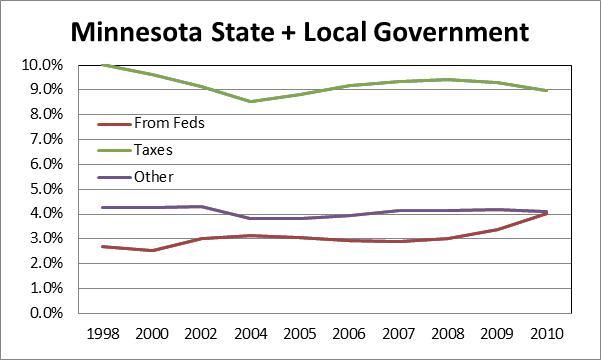 What does this tell us? In terms of taxes and overall size of government, Minnesota is a very average state. Its government has not changed significantly in size through the upheaval of changing the political parties in control, either.

One last note – these data also allow us to compare overall debt as a share of each state’s economy, and on that score Minnesota is also rather average but in relatively good shape:

If we were to introduce an economic stimulus bill up to the amount that would give us an average debt load, we could spend an astounding $7.7B on things like roads, schools, transit, and so on. I’m not advocating that, but it shows there is “headspace” for a major stimulus if we so desired.

There is a lot more data than this, so if you have any questions please ask! Spending information will be in a later post.