Since October, most of the financial news has been about Europe and the potential for a global meltdown.  The credit squeeze resulting from this crisis has become painful enough to demand serious action, which in global terms means our own Federal Reserve taking the lead.  Very little has changed since this crisis began upwards of two years ago, except the brick wall is approaching rapidly.

But what about the other big economic problem, unemployment?  Very little has been written about jobs in the US since it appeared in September that something like a turnaround has occurred.  Unemployment Initial Claims were 390k-400k each week, seasonally adjusted, through October and November with little change.  That’s a net loss of 1.7M jobs per month before we add in the total creation to arrive at the total employment picture. 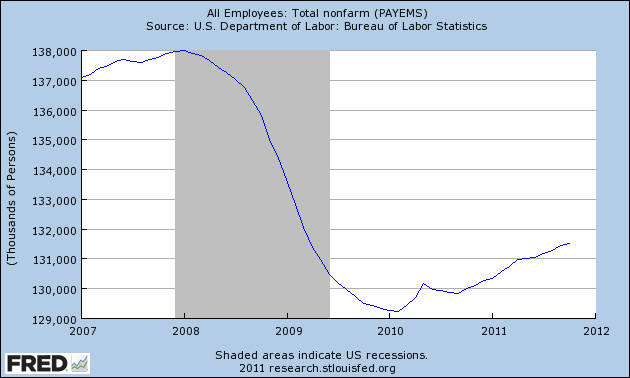 You can see from this chart that from the peak of 138M employed people in the US the last official “recession” dropped about 8.8M jobs to a low of 129.2M.  Since that bottom in early 2010 we’ve rebounded about 2.3M jobs to 131.5M.  More to the point, the total number of jobs has been expanding at a steady, even clip for the last year.  Looks like good news?

The problem is that as young people enter the workforce, we need more than the gap of about 6.5M to reach full employment.  Estimates run between 8M-10M typically, but a lot depends on family arrangements and how that generation winds up defining their expectations in life.  At this rate, it will take another 4-5 years to get to the point where unemployment is not a significant problem.

That may make this “recovery” look especially weak, but it is far from it.  Let’s expand the graph a bit to include the last two official recessions, going back to 1989: 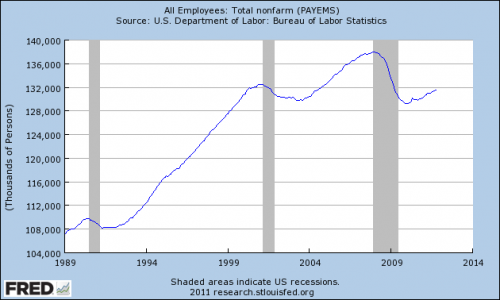 Note that in 1990 there was a longer lag-time at the bottom before things picked up, showing that in the first 2.5 years since the official end of the recession a similar number of jobs were created as have been this time around. For the official recession of 2001 we can see it took even longer to create that number of jobs, with the net loss continuing for three years after the end of the recession.  This is one of the many reasons why that “recovery” is dubious and the recessions of 2001 and 2007 appear linked in one large Managed Depression.

While the employment picture appears almost static there has been consistent growth in jobs over the last year.  This has come despite some rather large spikes in layoffs and resulting Unemployment Initial Claims over the summer.  The last chart is the same as the first, with the weekly Initial Claims on the right-hand scale. 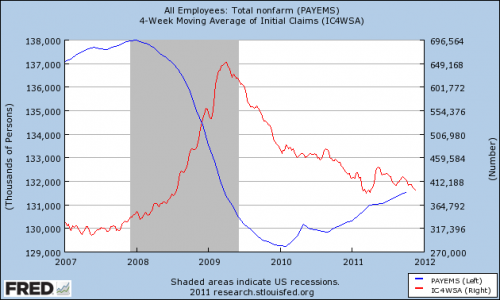 Despite shedding around 460k jobs per week on average, or a stunning 58M over the same 2.5 year period, we’ve managed to eke out respectable gains in the total employment.  Granted, many of these claims are people filing multiple times as temporary or seasonal jobs run out, but it is still impressive.  Total employment is going up much faster than layoffs are going down, meaning new jobs are being created, probably in new fields.

What we can say is that despite a great deal of turmoil in the job market, there is net growth in the number of jobs.  The pace is not great, but it is steady and consistent.  Layoffs continue and jobs are being lost, but they are being replaced at a slightly faster rate.

This is what a restructuring economy looks like.  As long as there is no big credit meltdown there is a decent chance that the pace of job creation might even pick up as the restructuring firms up and opportunities for major investment become obvious.  But the base for a strong recovery appears to be in place already.