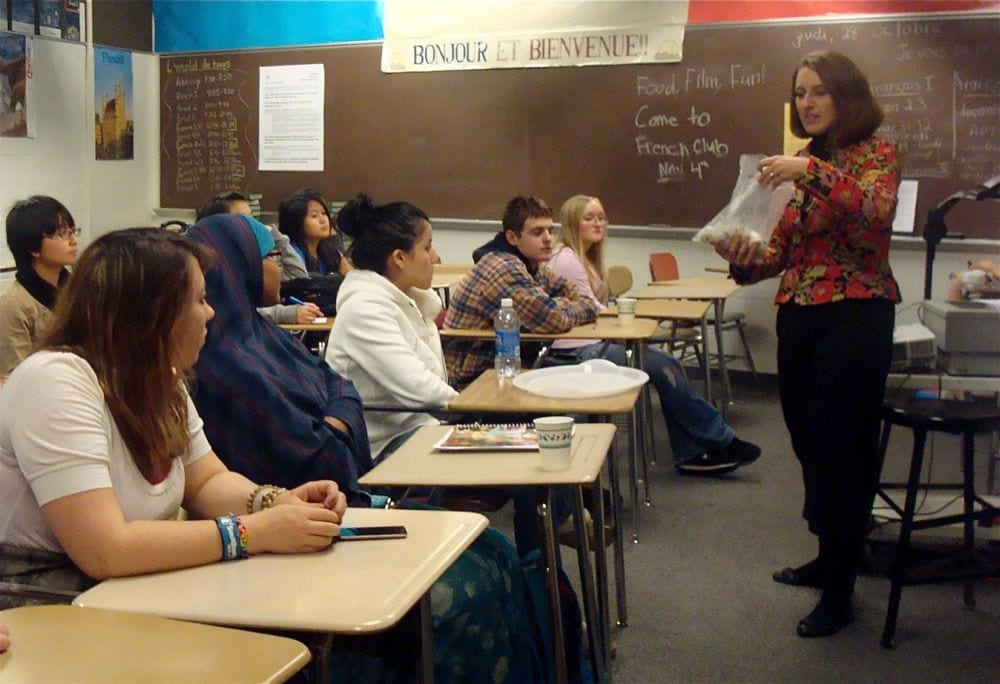 Como High School junior Augustus Johnson knows something about what it’s like to be a teacher, but there’s a lot he doesn’t know.

The self-dubbed president of the school’s Future Educators of St. Paul club knows from experience that getting kids’ attention is one of the hardest parts of teaching. He knows less about the pressure on teachers to produce high scores on standardized tests and work long hours for modest pay.

Johnson knows that the best teachers are the ones that connect well with young people like him. He doesn’t know about the increasingly frequent teacher evaluations and the calls to weed out “bad” teachers.

He probably doesn’t know that a recent survey showed that one in three teachers in the nation think they’ll leave the profession in the next five years.

“I know that there are actually teachers nowadays that would say they would never want to encourage someone to go into teaching,” said Nancy Solo-Taylor, founder of Como’s Future Educators club and one of Johnson’s favorite teachers. “I heard that from a mentor of mine, that she was not interested in encouraging any of her students to go into teaching, because it has gotten bad. And this was a really super, super good teacher.

Every two weeks during the school year, a group of around 10 active Future Educators and a number of drop-ins meet with Solo-Taylor to talk about tutoring opportunities, listen to guest speakers, watch YouTube videos and discuss the profession that Solo-Taylor still loves. She keeps the meetings informal, giving students just enough information to plant in their mind the idea that they could be teachers someday.

The club is part of a larger effort by the St. Paul teacher’s union to recruit and prepare high quality teachers. Future Educators got a boost this spring when it was included in the new teachers contract. The district agreed to pay teachers $3,029 to facilitate programs like the one at Como at other high schools. The figure is comparable to what National Honor Society and Student Council facilitators are paid. So far, no schools have signed up, but Solo-Taylor hopes that will change as word of the pay incentive spreads.

Joining the group helped one student find a paid gig as an assistant after-school French teacher. Another student won a scholarship from the national Future Educators Association.

The kids in Future Educators are more representative of Como’s diverse student body than its mostly-white teaching staff. In fact, part of the point of the club is to work towards an education system where students are taught by highly qualified mentors that look like them. Solo-Taylor doesn’t have to recruit non-white students: the demographics of the school mean she gets them by default.

Part of an alternative licensure initiative

A tiny piece of a bigger idea, Future Educators is currently the only active CareerTeacher initiative. The St. Paul Federation of Teachers started the initiative in an effort to create a role for the union in recruiting and preparing new teachers.

At the center of CareerTeacher is an alternative licensure program that would prepare laid-off or unemployed teachers to re-enter the profession as much-needed special education instructors. Although licensure coordinator Mary Denton had hoped to train the first cohort this summer, plans were put on hold last fall when St. Paul Public Schools declined to continue working with the union on the project.

Denton said the move was a surprise. The union was relying on the district to place trainees in temporary school residencies and to provide some financial support. District representatives were unavailable to comment on the decision.

A Star Tribune article reported this week that no organizations have applied to provide alternative teaching licensure programs, which were authorized by a 2011 law and touted as a means to replenish the teaching field with innovating professionals.

Not giving up on a difficult profession

She hasn’t found a partner institution, yet, but Solo-Taylor hopes eventually to teach a College in the Schools class at Como, focused on education. Students would get college credit for completing the course.

Solo-Taylor keeps most of the yucky parts of her profession out of Future Educators. “I wouldn’t want them to be introduced to education and then tell them all the bad things,” she said. “If I were to start talking about certain things that I feel strongly about, maybe their eyes would glaze over, and they’d say, ‘That’s your problem.’

“A good solid public education is so important to our society that we need to keep getting good people in as teachers, and those are the people that can save the profession and can save those public schools,” said Solo-Taylor. “You can’t give up on it just because you’re disillusioned.”