“No jobs, no houses, no pension, no fear,” is the chant coming from previously apathetic young people in Spain. 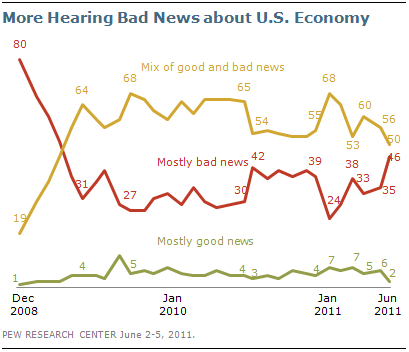 There’s more analysis on what young people waking up means…

I think that Republicans, the Super Rich Republican Patrons and Big Corporations are relying bad economic news to put the Republicans more completely in power. Nate Smith puts the economic influence in voting at about 50%.

In fact, if you are were looking at Republican actions in terms of making the country better, then nothing that the Republicans are doing makes sense. In the recent past, Republicans never worried about debt limit when they spent for war, cut taxes for the rich or bailed out the biggest banks. And now when when need to keep the economy growing to get out of a recession, the Republicans suddenly are concerned about the debt limit. State Republicans are still protecting the richest 2% paying less proportionately than the rest of us rather than keeping government going. So my conclusion is that Republicans are deliberately trying to create bad economic news.

However, the real question is what will happen as young people get more active in politics. Young people have been trending more Democratic by a 25% advantage according to Pew studies. The corporate media control does not totally control the message when comedians like Jon Stewart are listed in Pew Studies as tied for fourth in favorite journalist. This generation is also ranked the highest for use of social media. Maybe, just maybe, this generation will make up its own mind independent of corporate media and big money advertising.

What will happen when American young people stand chanting, “no jobs, no houses, no pension, no fear?”