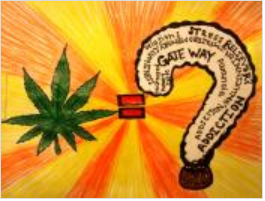 For the better part of a year, getting high was the only priority for Aaron.

With long hair swished over his baby face, the 14-year-old student at Sobriety High in Burnsville spoke with measured maturity about his addiction to marijuana.

Aaron’s frequent use led to a drop in grades, the destruction of family relationships and a daily routine consumed by smoking weed. His behavior eventually led to a suspension after school officials caught him with a pipe and lighter. Sober for close to 90 days now, Aaron is on the slow path to recovery at Sobriety High, a charter school centered on providing a safe environment and continuing education for teens recovering from drug use.

What do teens think?

The recent legalization of cannabis for recreational purposes in Colorado and Washington has sparked conversation among teens about the future of Minnesota’s laws.

Some claim that legalization would only lead to health issues and more use by teens like Aaron, whereas advocates argue that legalizing marijuana in Minnesota would remove the real problem, the underground lifestyle required because using pot is illegal.

In interviews and the Student Survey, teens said they viewed using marijuana once or twice a week as less harmful than binge drinking or smoking a pack or more of cigarettes a day. While only a few teens were interviewed for this article, their views serve as a fair measure of attitudes and concerns.

Danny, the self-described “King of Weed,” has been smoking nearly daily since tenth grade. A senior and St. Paul resident, he supports legalization of marijuana use in Minnesota, but not only because he enjoys smoking it.

“If you’re going to smoke pot, you’re going to smoke pot whether it’s legal or not,” he said. “It should be legal, because since it’s currently not regulated by the government, you have a bunch of dealers with weed, and all you need to buy weed is $20. If it’s regulated by government, it would be harder to get for younger-aged kids who shouldn’t be smoking pot. They don’t know what they’re getting into.”

There is more in play than keeping pot away from young first-timers. An often unspoken, and perhaps underestimated, aspect of marijuana use is the lifestyle associated with frequent weed smoking.

Dylan, who did not want any other details about his identity used in this story, caved to peer pressure and tried pot early in high school. Now he is firmly against legalization.

“I looked at myself and the people I was hanging out with. I didn’t like the atmosphere and the people around me,” he said. Dylan also noticed that his memory wasn’t as sharp and that he was having trouble focusing.

“I was 16 when I made the active decision not to smoke. I love to learn and to think actively, so I quit,” he said, also citing the “shady, hush-hush lifestyle” as a major deterrent.

Though he had a negative experience with marijuana, Dylan admitted that he could be tempted again if everyone around him was using. He’s opposed to legalization because he thinks it would increase exposure among teens and young adults.

At Sobriety High, Aaron echoed those sentiments. Much of the risk in returning to a conventional high school involves peer pressure that can drag down a former user. Aaron is honest about marijuana’s power over his self-control, especially if smoking it becomes legal.

“If someone is smoking right in front of me and passes me a joint, that’s going to be a lot tougher to resist,” he said.

Aaron isn’t alone in this struggle. He is one of 30 high school students recovering from drug addiction at Sobriety High Alliance Academy in Burnsville.

The Burnsville branch is one of two Sobriety High campuses. The other is in Coon Rapids. The majority of Sobriety High’s students are white males, which does not represent the entire teen drug population, only those who have greatest access to Sobriety High’s resources.

Housed in an office complex, the school’s plain exterior is deceiving. Whether it’s the colorful and inspiring quotes written on classroom walls, or a student-drawn mural in the main hallway depicting a path that leads from a dark and torturous hell to a sunny field, Sobriety High provides a feeling of security and trust.

While not a traditional high school, the campus serves a unique role by combining elements of therapy with traditional education. Every morning, all 30 students assemble in a ring of chairs meant to foster a close, family-like atmosphere. The rest of the day is spent passing the open kitchen and hall lockers on the way to small classes for subjects like English and math.

At the center of it all is Judi Hanson, the director of community and family outreach who has called Sobriety High home for 21 years.

Hanson’s previous work at a treatment center gave her an intimate look at teen drug abuse. At Sobriety High, she acts as a sort of motherly advisor to many of the recovering students. Hanson knows all the teens by name as they pop in and out of her front office.

“We’ve tried to make it the one place where a student can come from treatment and have a safe place to have an education,” she said.

While explaining her opposition to legalization, Hanson pulled in several passing students to ask about their experience with marijuana. Without fail, each student talked about the ease and comfort of smoking weed at an early age, some as young as 12.

When they started smoking, most felt like Aaron did: “It’s a plant that grows from the ground, so it can’t hurt you.”

Which leads to another key point in the fight to legalize marijuana: The medical benefits.

Since marijuana can be used to treat pain and nausea for cancer and some other illnesses, many teens consider pot to be relatively harmless. In health classes, teens are bombarded with warnings about cigarettes without nearly as much attention to weed.

But according to a study of marijuana users in New Zealand that was released last year, smoking marijuana is causing long term damage to intelligence.

The study released by the National Academy of Sciences tested the IQ of people between the ages of seven and 13. They were tested again at 38. Those who smoked pot more frequently experienced a drop between one and six IQ points over time. That’s big enough to affect performance at school and work.

“I have both personally and professionally seen that weed has not enhanced or added to anyone’s life or growth,” Hanson said. “It robs you of running on all four burners.”

Then again, how many teens are concerned about their IQ in 25 years? Compared to the photograph of a lung blackened from years of cigarette abuse, a potential drop in IQ from marijuana use might not register as forcefully.

“Yeah, I’ve thought about the health ramifications of smoking weed, but I knew what I was getting into,” Danny — the “King of Weed” — said after being told of the study. “To a habitual smoker, that won’t mean a lot.”

So if teens are aware of the dangers and negative effects of smoking, why smoke at all?

Dylan — the former short-time user — said he’s heard a lot of reasons: “It feels good.” “I can’t sleep at night,” “It helps me concentrate” and perhaps simplest of all, “It’s fun.”

“I would say 75 percent of the experience is the adrenaline rush,” Danny said. “You say, ‘Holy crap! This is illegal and I’m doing this right now!’ It makes you feel great.”

For Aaron, though, it was never about excitement. Weed brought the one thing he craved most as a teenager: Acceptance.

“Everyone I looked up to was doing it. I never fit in with a group, and I saw it as an opportunity to fit in. And it was,” he said.

However, instead of being welcomed into a group of close friends, Aaron’s need for acceptance became his weakness. It led to, perhaps, the harshest truth of all about his addiction.

“I would buy a bunch of weed, and sit down and smoke it all with my friends. I was the most generous person ever,” he said. “That was the weirdest thing. I was so nice to these people and still got treated like crap. It goes to show you they’re not really your friends.”

Aaron’s experience is something Hanson has seen time and time again, a bit more frequently among males who view pot smoking as more of a “social activity.”

That “lifestyle” choice may be where the greatest divide occurs among teens who’ve used.

Both Danny, who smokes weed proudly, and Dylan, who gave up pot when it clouded his thinking, are clear about the influence marijuana has had in their lives. Aaron is caught in the middle — trying to get his life on track, but fully aware that outside the safety of Sobriety High, he could end up in the same dead end.

“I never really realized I was hurting my family and my friends until I got sober. My parents were talking about how much money I stole from them and how much they spent on me just to get sober,” Aaron said.

For Danny, the positives of marijuana use outweigh the negatives. He isn’t shy about acknowledging the costs, but is happy to say that weed gives him exactly what he wants out of life.

“I was a straight A student my freshman and sophomore year,” Danny said. “I would look at the stoners and be like, ‘Why would you ever want to do that?’ I never imagined that I would be one. Now I see life in a completely different way. I like to change my perspective in life … It’s all about the experience.

Aaron has a new path in mind. He plans to stay at Sobriety High to finish his high school education and obtain a diploma.

“I hope to stay sober and live every day like it’s my last,” he said.

ThreeSixty Editor’s note: To protect privacy, ThreeSixty Journalism has changed names or is only using the first name of teenagers in this story.