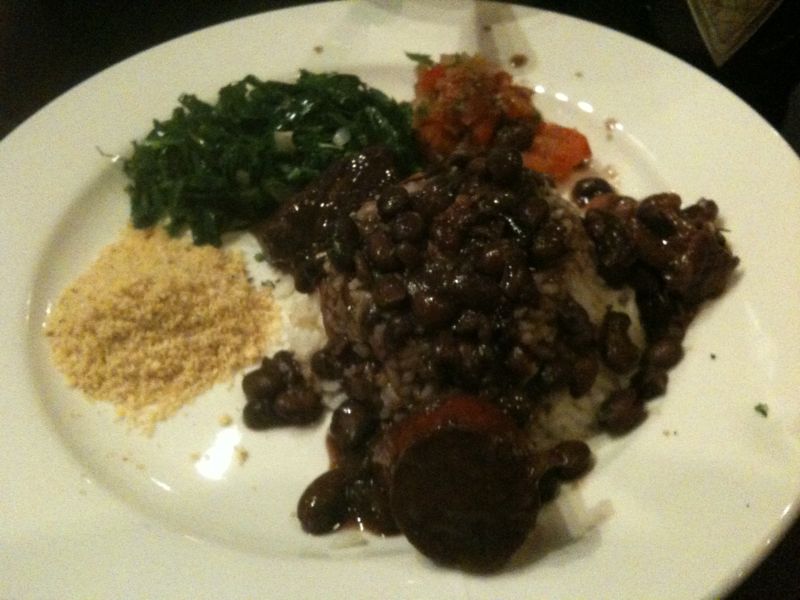 Rio de Janeiro isn’t in my travel plans this year, but driving down Main Street in Hopkins the other night, I came across a delightful surprise – a new Brazilian restaurant called Samba. I am not sure what happened in Hopkins over the last year or two, but it seems like a gastro-neutron bomb wiped out a lot of the local restaurant scene: Michaeangelo’s Trattoria, Camille’s Sidewalk Cafe, Gusto Cafe and Wine Bar, the Best Steak House, all closed, and the venerable Jack Yee’s, one of Minnesota’s oldest Chinese restaurants, shut down (maybe temporarily?) by order of the Hopkins health department. Even Burger King bit the dust.

Samba has only been open for three weeks, but the local Brazilian community has already discovered it – on a Sunday night, most of the tables were occupied, and the conversations I could overhear were in Portuguese. Samba offers a full bar and a nice selection of traditional Brazilian dishes including a churrasco plate ($18.95) – sirloin and pork sausage with rice, beans and farofa (toasted manioc flour); moqueca (a seafood stew from northeastern Brazil, made with either fish or shrimp, dende oil and coconut milk, $15.25); and the Brazilian national dish, feijoada ($15.95), a savory black bean stew served with rice, farofa, collard greens and a tomato salsa. According to tradition, feijoada is supposedly made with “every part of the pig” (wink, wink), but the very tasty rendition I enjoyed at Samba seemed to contain only lean meat and a savory sausage. I followed it with a dish of pudim ($4.25), the Brazilian version of flan, which was everything flan should be – a simple but delicious caramelized custard.

There’s a lot more on the menu that I would like to try – especially the moqueca, but also the bolinho de bacalao appetizer (salted cod fish cakes, $5.95); the carne seca (shredded dry beef with manioc puree, $11.95), and the mousse de maracuja (passionfruit), $4.95. Some of the dinner menu entrees are also offered as $8.95 lunch specials on weekdays, such as the feijoada, available on Wednesdays. There’s a nice selection of Brazilian groceries, including frozen foods, cheeses, sausages and packaged items in one corner of the restaurant.

My only complaint is that the Brazilian music was almost inaudible – a shame for a restaurant that calls itself Samba. At my request, the owners turned up the volume a little bit, but with Carnival season almost here (the parades in Rio de Janeiro start February 14) I hope they’ll crank it up some more to get spark the true samba spirit.