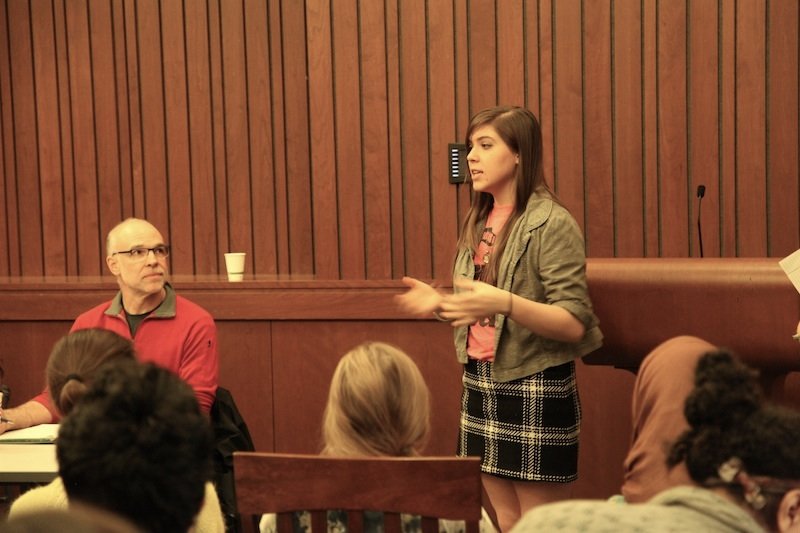 Every year thousands of students from more than 800 universities and colleges across the U.S. apply to become Teach For America (TFA) corps members, hoping to gain teaching experience with youth in low-income schools. The TFA Truth Tour told stories of under-prepared recruits, and sweetheart contracts between schools and TFA.

Students at Macalester College hosted a presentation and Q & A session on March 31, which focused on adverse effects that corporate education groups like TFA might be having on public schools around the country. The presentation was led by Nick Faber, a teacher and secretary of the St. Paul Federation of Teachers; Neja Singhal, a former TFA corps member; and Fran Lawrence, Vice President of the American Federation of Teachers. The event drew more than sixty Macalester students, community members, former TFA corps members and the TFA Executive Director for Minnesota, Crystal Brakke.

“I really believe that if more college students actually knew what TFA was doing at the policy level, they would not be applying to be a corps member. They would never want to be a part of this organization,” said Neja Singhal, who relocated with the program to the Rio Grande Valley in southern Texas after her graduation from the University of Maryland.

During the presentation, Singhal shared how she first got involved with TFA as a student organizer during her senior year as an international business major. She had started a leadership educational program for students around Maryland and was looking for ways to become a teacher without going into student loan debt.

“I will admit that I bought into the idea that student leadership skills equate teaching skills. That’s what they (TFA) sold,” she said.

Singhal was accepted into the program as a high school math teacher, which she said came as a shock to her since she didn’t have much experience with math, outside of taking one calculus class in college. She said that once she arrived in the Brownsville area, she was alarmed to learn about the number of teacher layoffs in the schools where she and other TFA corps members had been told that they had received interviews. She said that she was under the impression that there was a teacher shortage in the area.

“Every other young person that I met in that region was trying to become a teacher,” Singhal said. “Teaching and the education industry in that area of Texas is like one of the best ways people get a professional job, a long-term career besides the healthcare industry.”

When she and other concerned corps members took these concerns to the Executive Director of Teach For America in Texas, he responded that it was a fair hiring process and that school districts just happen to hire TFA corps members over other candidates. Singhal went on say that she believes that could not have been the case since school districts that employ TFA corps members are required to sign a contract with TFA stating that they will hire a certain number of corps members each year and that TFA arranged the interview at the school for her. They also gave her a question and answer sheet ahead of her interview at the school to help her prepare.

“When I went to my interview, guess what; every single question they asked me had been on that sheet,” she said.

“Administration knows that Teach For America corps members aren’t going to be doing long-term organizing to get better workplaces, to have a sustainable work model as teachers. They know that we are basically being told by TFA ‘do not rock the boat, smile, be good, do your work, get the test scores up, be good with admin, but don’t cause any issues because then you’re going to mess up TFA’s name.’”

Singhal said she experienced a crushing workload during her first weeks of teaching, getting up at 6 a.m. every morning and working late into the night on grading and lesson planning.

“Trial by fire, or sink or swim approaches to teaching just have to end,” said Fran Lawrence. “They don’t work, they’re insulting. They’re not fair to teachers and definitely not fair to students.”

Lawrence, who spent more than 40 years as a teacher in the Toledo, Ohio school district, described teaching as a “complex endeavor” that requires the support of experienced mentors during a new teacher’s first year of teaching and the proper education at the university level. She said that while there’s no doubt in her mind that there are many people who are attracted to TFA for different reasons who might potentially be great teachers, it is more important to attract qualified people to the teaching profession who want to remain in the classroom over a longer period of time.

“I think about some of the classic professions, medicine and law. I wouldn’t want to be in the need of a cardiologist or an oncologist who’s only going to be spending two or three years in that area. I want somebody who is committed over time,” she said.

Similar presentations and discussions about corporate education reform and groups like TFA are taking place on campuses around the country. This presentation was also the first event organized by Macalester Students for Educational Equity (MacSEE) as they attempt to create more space on the Macalester campus to openly discussion education policy.