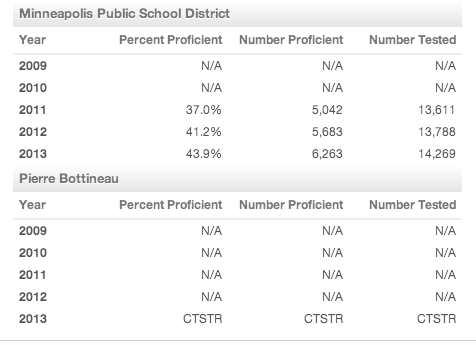 In November 2013, just over a year after it opened, Pierre Bottineau’s governing council voted to close the school, citing financial trouble. MPS, however, retains authority over the school and they have stated their commitment to keeping the school open. For the 2014-2015 school year, Pierre Bottineau will move to the Cityview School building, where it will share space with Cityview Elementary. Cityview was one of the schools closed by MPS in 2009; it will reopen this fall as a K-5 “STEAM” school. By relocating to Cityview, the school will have a broader attendance area, and students from both north and northeast Minneapolis can be bused to the school.

Tom Franta, the director of MPS’ Office of New Schools since August 2013, said that part of the district’s commitment to Pierre Bottineau will include more financial support, as well as hiring a consultant to help figure out a more appropriate workload for the school’s new director, who has yet to be hired. This consultant will also be brought in to work with the school and help model what a successful elementary immersion experience looks like.

Franta, who comes to MPS from his work in New York as a lawyer, does not have an education background himself but feels confident in the Office of New Schools’ ability to provide ongoing monitoring and oversight of the school. Acknowledging that staffing has been an issue for the school, and Franta said MPS “should have been more mindful” of the “pipeline” of licensed immersion teachers. Now, the district’s human resources department will take a greater role in the search for qualified, licensed teachers who are also fluent in French.

While the school rebuilds its teaching staff, it will open in 2014 as a full immersion school for grades K-2, with grades 3-5 getting a “French enriched” curriculum so that new students could transfer into the school without having prior knowledge of French. Franta says this approach is also designed to help grow the school’s enrollment, which is currently 77 students. By the fall, MPS would like to have 145 students registered, although Franta says he is not sure the district got the word out about Pierre Bottineau in enough time for families to put it down as a “first choice” on their school enrollment cards, which were due in mid-February.

Both Brogdon and Jolstad say they are still committed to the school. Jolstad, who is no longer directly affiliated with Pierre Bottineau, still believes that a French immersion school will help students from diverse backgrounds do well. In fact, she said, state MCA scores for Pierre Bottineau show that the school has been “blowing the district out of the water” with strong impressive results. (No scores are available on the Minnesota Department of Education website.) Will the experiment of Pierre Bottineau, she wondered, help the district by exposing barriers to innovation?

Brogdon, who has had two children at the school since it opened, said she has gotten assurance from Maynor that, despite her absence, Pierre Bottineau will open next year, and there will be teachers there to serve the children. Brogdon said the school has been a positive experience for her children; she likes the diverse, urban atmosphere of the school, and she has been able to have conversations in French with her two young children, meaning that the school is doing something right.