First, some exciting news for lovers of authentic Thai food who live in Minneapolis: you no longer have to trek all the way over to the far end of University Ave. to enjoy really authentic Thai cuisine. The owners of Bangkok Thai Deli and Supermarket  have opened a second location, Krungthep Thai Cuisine on Eat Street, in the former Seafood Palace at 2523 Nicollet Ave. Watch this space for a full review.

I hadn’t actually heard of Social House until a few days ago, when somebody called me about advertising the new Uptown bar and restaurant in the Daily Planet.

The ad buyer explained to me that the new Social House, which has its official grand opening on November 30 (but is already open), is the former Fusion, but totally remodeled and with an expanded kitchen and menu. They changed the name to Social House because nobody knew what kind of restaurant Fusion was supposed to be. (I didn’t have the heart to tell her that I had no idea what kind of restaurant Social House was supposed to be — I assumed that it was some kind of neighborhood center.) Turns out it’s Asian fusion, which is what Fusion used to be, sort of.

At first I wondered whether the owners of Social House were trying to curry favor with the restaurant critic of the Daily Planet (me) by buying an ad from the publisher and acting advertising manager of the Daily Planet (also me). But it turned out that the lady who called had never heard of Jeremy Iggers in either capacity. (Fame is so fleeting.)

At any rate, I tabled weighing the ethical dilemma of writing about a prospective advertiser, and went off to a movie with Carol — the Descendants, with George Clooney, playing at the Uptown. Clooney plays a Hawaiian tycoon who discovers that his dying comatose wife cheated on him, but that’s neither here nor there. Except that when we walked out of the theater, we were hungry, and Social House was right across the street. So we walked in to check it out, and discovered that it was happy hour — 4 to 6 daily, and 9 p.m. to midnight Monday to Wednesday. 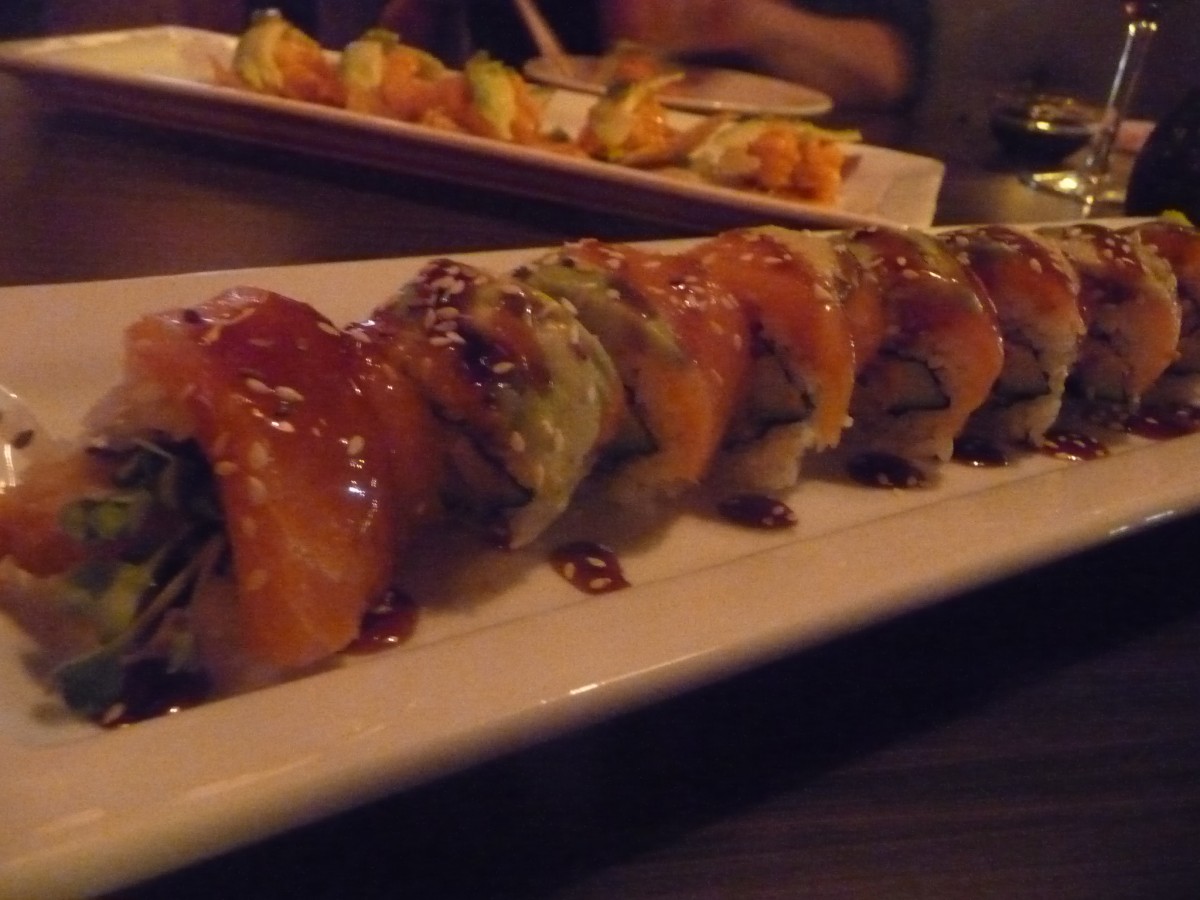 The happy hour specials include half off on drinks, starters, and some of the “tier 1” maki sushi rolls (regularly $6-$16), and $4 glasses of the house wine and house sake. We ordered the Social House shrimp (four large coconut shrimp with pineapple sweet and sour sauce, $10), the takudan tacos (deep-fried wonton chips topped with tuna or salmon tartar, cucumber and avocado in a spicy wasabi glaze, $14.50) and the #9 roll, (tempura shrimp, cucumber, salmon, avocado and a spicy mayo, $16). I liked the tacos and the #9 a lot, and the coconut shrimp weren’t bad, either, but a pretty standard renditon.

I don’t know whether I would be as enthusiastic if I were paying full price, but at happy hour prices, it was a terrific deal — with three drinks, and three dishes, our tab came to $30.64, plus tip. There is a lot more on the happy hour menu that I would like to try, including the Kobe sliders (regularly $9 / $4.50 happy hour), Korean tacos ($6/$3), and the nori encrusted sirloin ($12/$6). 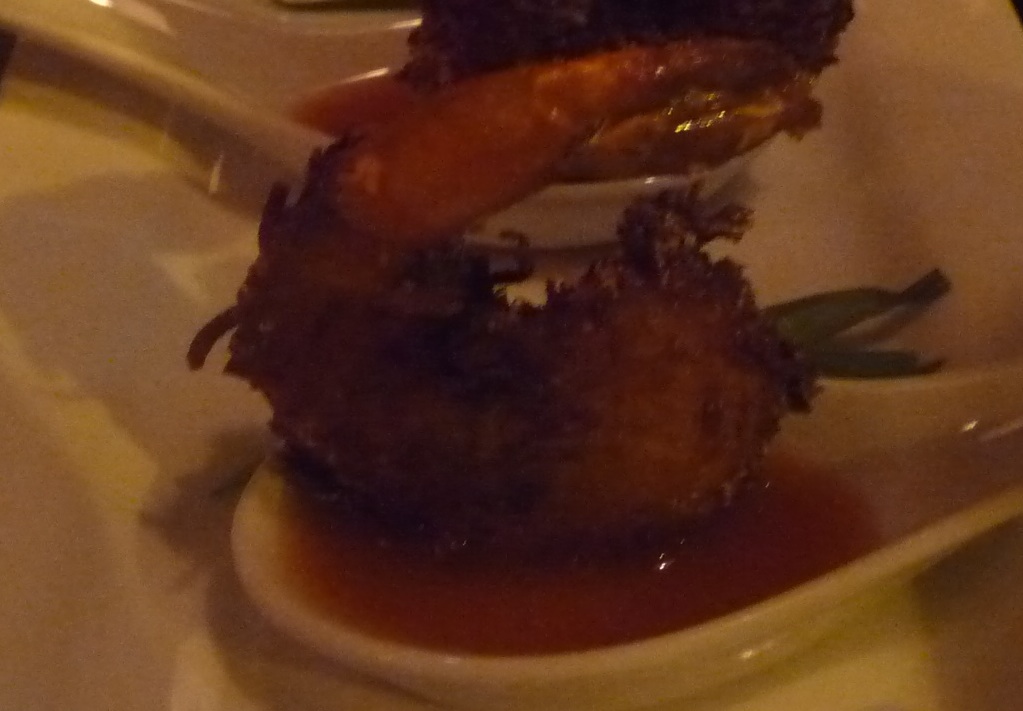 And there are a number of interesting-sounding items on the other parts of the menu – sunomono salad with shrimp, octopus or snow crab ($8/$8/$9), entrees of kung pao chicken ($10) and coriander encrusted NY strip ($22), and lots and lots of specialty sushi rolls.

The ambience is quite attractive – dark and red and very Oriental and exotic. We sat in the main dining and bar area, but there is a small room off to the side with a sushi bar and a large screen tv that running an endless loop of shorts that includes the Three Stooges.

Service was friendly and enthusiastic,  if a bit unfocused. We asked for the tuna takudan tacos, but got the salmon version, and when we mentioned it, the server immediately offered to replace it, though we had already consumed half of the dish. (We declined). The target demographic seemed to be half our age, which is no surprise in Uptown.

(As for the editorial dilemma, when I write for the Daily Planet, I am subject to the same editorial standards of fairness, accuracy and complete disclosure as any other contributor. So if you are reading this, that means that this story passed muster with our editors, who have final say on day-to-day editorial decisions. And if you aren’t reading this, then something has gone terribly wrong with the fundamental laws of the universe.)