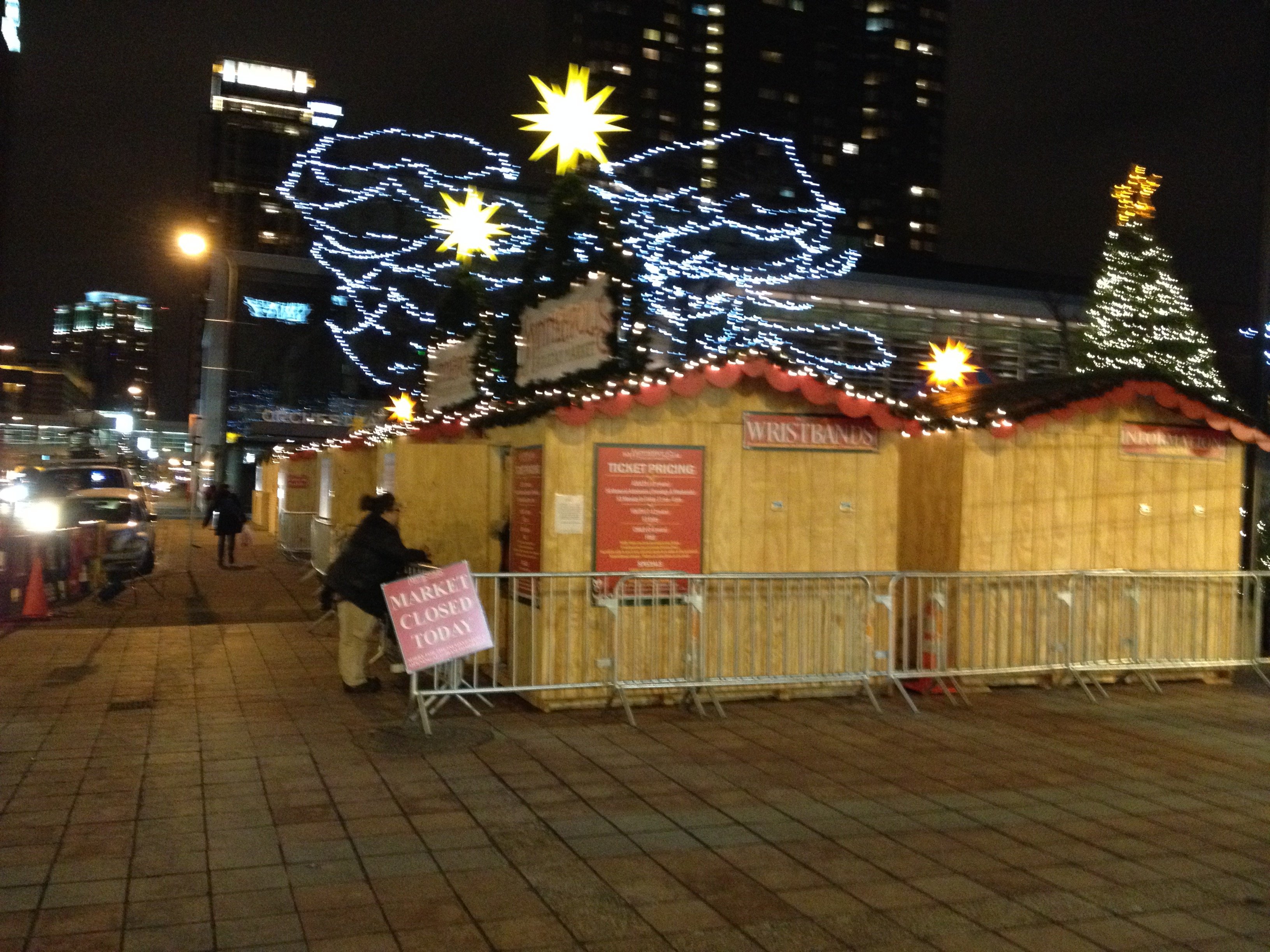 So it seems our little Holidazzle Market has some critics. Apparently, it’s not stroller or kid friendly enough. Apparently it’s outrageous to stop offering the same old free entertainment the patronage for which was insufficient to induce downtown businesses to continue supplying it. Apparently it’s just uncouth to ask visitors to contribute a small amount of money to cover the costs. Apparently the organizers are supposed to be thankful if people just browse for free.

And, apparently it’s both so devoid of patrons as to be unappealing and too crowded to be able to see what vendors are offering.

But one thing is for sure, the organizers absolutely nailed provoking the maximum amount of whining.

First, let’s recognize a few realities about this event to set our expectations.

– Peavey Plaza is an inaccessible mess. The city wanted to change that, but was thwarted.

– There aren’t many spaces available that could host this event downtown. Remember that whole lack of a downtown park thing? Maybe in the future they can use the park formerly known as The Yard (can’t remember what they changed it to and it doesn’t matter enough to look up), but for now, Peavey Plaza is about all we’ve got for an outdoor venue that’s public and near retail (which even The Yard would not be).

– Shoehorning the market into the plaza means patrons are going to have to deal with the vertical elements of the plaza’s design. Maybe you want to thank those who fought to keep it the way it is?

– The market sells alcoholic beverages (hot German drinks and beer). These beverages are culturally relevant to the event and part of the fun.

– Selling alcohol likely comes with restrictions (if I wasn’t writing this for free, I might research that point some more), which may include restricting access.

With those things in mind, let’s look at what, in my opinion, organizers got right:

The market looks nice. From the street it fits in an interesting way into the multi-level space (although obviously, no fences would look a lot nicer). The “village” portion of the event – the reindeer pen, story stage, glass blowing exhibit, whatever they are calling the other stage – integrate reasonably with a fully pedestrianized (why can’t we have this all the time?) stretch of Nicollet Mall. The offerings are decent, featuring mostly culturally interesting German items and things like knits and clothing that fit in the cold. For someone like me who doesn’t particularly enjoy shopping, there is an appropriate emphasis on food and drink.

What maybe could be better but might be subject to limitations that I, a lowly internet commentator, can’t really evaluate:

There’s an entry fee and access to the market is controlled. The German mustard stand has not been open the three times I’ve been.

So, yeah, we can all be outraged about the lack of mustard. I’ve got pork in the slow cooker with sauerkraut here, people. You expect me to eat it without Koenig Senf? That’s one part short of three parts of deliciousness, friend. A staffer told us that the mustard shortage was a result of FDA or importation issues, so maybe the real blame falls on Obamacare or something.

As to that other pesky issue, having enjoyed the Cologne Christmas market on a vacation past, I was disappointed to learn about the fee. In a perfect world (and a good German Christmas Market can get pretty close if you ask me), it would be free so that people could more easily wander in and out and so that the event would be open to everyone.

But we’re not in a perfect world. We’re in a world where a fair amount of expense went into building, setting up, operating and maintaining the market and surrounding (free) holiday village activities.

If you’re disappointed because you just wanted a quick pop in and didn’t think the cost worked for you, that’s unfortunate. But maybe you also need to ask yourself two questions: (1) was this event organized for people like me, and (2) should it be? I don’t think it’s a coincidence that it’s a one time fee and that return trips are free. Maybe it’s okay to have an event that prioritizes patrons who will be interested in a return visit? Maybe catering to the lightly interested hasn’t worked in the past (see all those parade viewers who didn’t shop downtown) and can’t reasonably be expected to work now? Maybe people who live, work and spend time downtown won’t mind paying once, because they can come back. If you’re thinking, “I’d rather be at the Mall of America,” I’m talking to you.

Which brings me to the last category, things that may not be how you’d like them to be but don’t make them mistakes:

The market is much less kid-centric than the parades of the past.

Pretty much everything on offer in the market is for adults, most notably the alcohol, or at least not terribly likely to hold kid interests (Christmas ornaments, soaps, beer steins, knits, etc.). I can’t help but think that’s intentional from the organizers, as families with small kids may not be the ideal patrons for nighttime retail in the city. Go figure.

I’d say I’m sorry that there isn’t enough here for your kids, but I’m not really. We have no shortage of family-first events. It’s okay to have adult-first ones too.