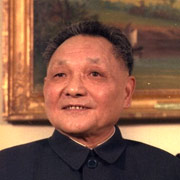 To truly understand China’s growth as a global economic powerhouse, one must know a little about Deng Xiaoping. He rose to lead China during the 1980s and revolutionized (couldn’t help myself) its economy from being completely state run to a modified open market.

In fact, his belief that a capitalistic road might put China on a more sustainable economic path, resulted in Mao Zedong’s regime purging him from party leadership twice during the Cultural Revolution.

Deng’s political resilience catapulted him back to lead the country following Mao’s death, when he implemented the nation’s great economic reforms. However, for all of the economic and cultural freedom he allowed in China, Deng refused to open China politically. His oppressiveness eventually led to the Tiananmen Square massacre.

Here’s why Deng’s economic enlightenment is important to Minnesota. While China certainly exports a disproportionate number of goods to the U.S., it also buys a lot of Minnesota iron ore, corn, soybeans, hogs, and other manufactured products. After all, it has a potential 1.6 billion customers with growing middle class purchasing power.

“With sales of $2.3 billion in 2011, China is Minnesota’s second-largest export market for manufactured goods. It is the state’s top market for agricultural commodities and related food products, with purchases of $1.35 billion in 2010,” according to a Minnesota Department of Employment and Economic Development press release.

Governor Dayton is currently in China with about 4 dozen Minnesota business and agricultural leaders to strengthen trade ties and grow demand for Minnesota-made products.

China’s growth presents opportunities and challenges. While Minnesota farmers, engineers, marketing experts, high skilled blue-collar workers and sales people will find opportunity in trade, this also means jobs for Chinese workers. (This also opens the door to a deeper discussion about displaced U.S. workers and a stronger education system to ensure Minnesota has a highly skilled and adaptable labor force.)

Remember earlier in this blog that Deng never opened up the doors to democracy. These political barriers remain today. Therefore, when it comes to expanding those workers’ rights and wages—something that helps ensure China plays fairly in global trade—U.S. companies become the watchdog.

Which really means it’s up to us as consumers of these products to demand fair trade, fair wages, and human rights for Chinese workers. We can no longer let U.S. policymakers tip-toe-around the human rights issue for fear that China will close its doors to trade.