OK, maybe not everything, but Aaron Carroll has put together the data and graphs to indicate that some things commonly believed are wrong. For example, if you told me so many Canadians streaming over the border to get US health care shows how bad they have it in Canada, my answer would have been Canadians mostly live along the border, and US facilities are often the closest. Much of Canada is rural, and people in rural areas often have to travel a long distance to reach a hospital or even a clinic. Besides I would have hastened to add, when they come here because of an emergency or they can’t get a timely procedure in Canada, their province pays the bill, so it’s not like they’re having to cope with our dysfunctional insurance. I’d have also asked if the number of Canadians in US hospitals included those who just happened to get sick or injured while traveling in the US.

That would have been wrong. Not all wrong — in fact, each bit of that is right by itself, but works off an incorrect assumption, that lots of Canadians get the health care here. Look at Carroll’s chart, and it turns out they aren’t coming across the border much at all. 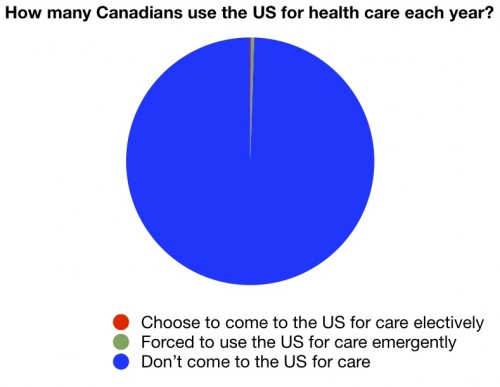 Something else we all know that isn’t actually so is that a price Canadians pay for their cheaper, government-funded system is that Canadian doctors move here, because US doctors are much happier with their conditions. Yes, doctors are leaving Canada — some years, but some other years more move in. That doesn’t mean they’re moving in because they like Canada’s system, but it’s pretty clear Canada’s system isn’t driving doctors out. Looks like a wash. Since they aren’t move out, the maybe the assumption they move out because they’re dissatisfied with working in Canada is also false, and, well, look at this: 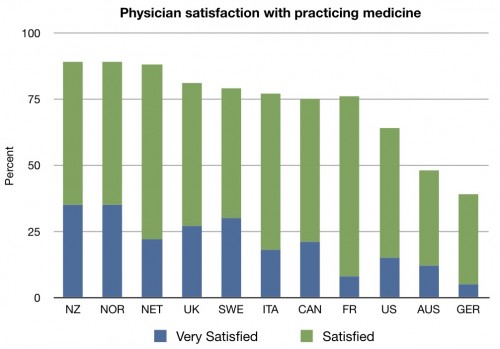 Canadian doctors might not be a lot more satisfied than Americans, but they clearly aren’t less satisfied. So the claim doctors will quit if we move to a single-payer system is a claim still desperately searching for an example.

I think we all knew what’s in this chart, and by “all”, I’m not counting the conservatives who refuse to believe we don’t somehow take care of everybody. I also don’t think the chart shows just how bad it is. 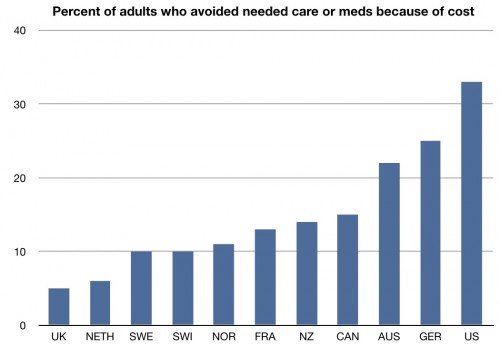 That’s just people who avoid getting care. A better illustration of just how deep the problem goes was in a chart in a post Carroll linked to: 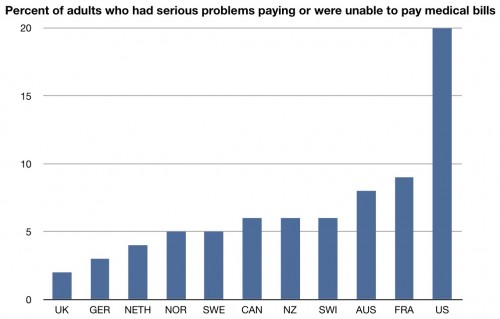 This is the only industrialized democracy where we can go bankrupt just from medical bills. Someone reconcile that with this being the best medical system in the world, because I’m thinking those two things don’t go together.