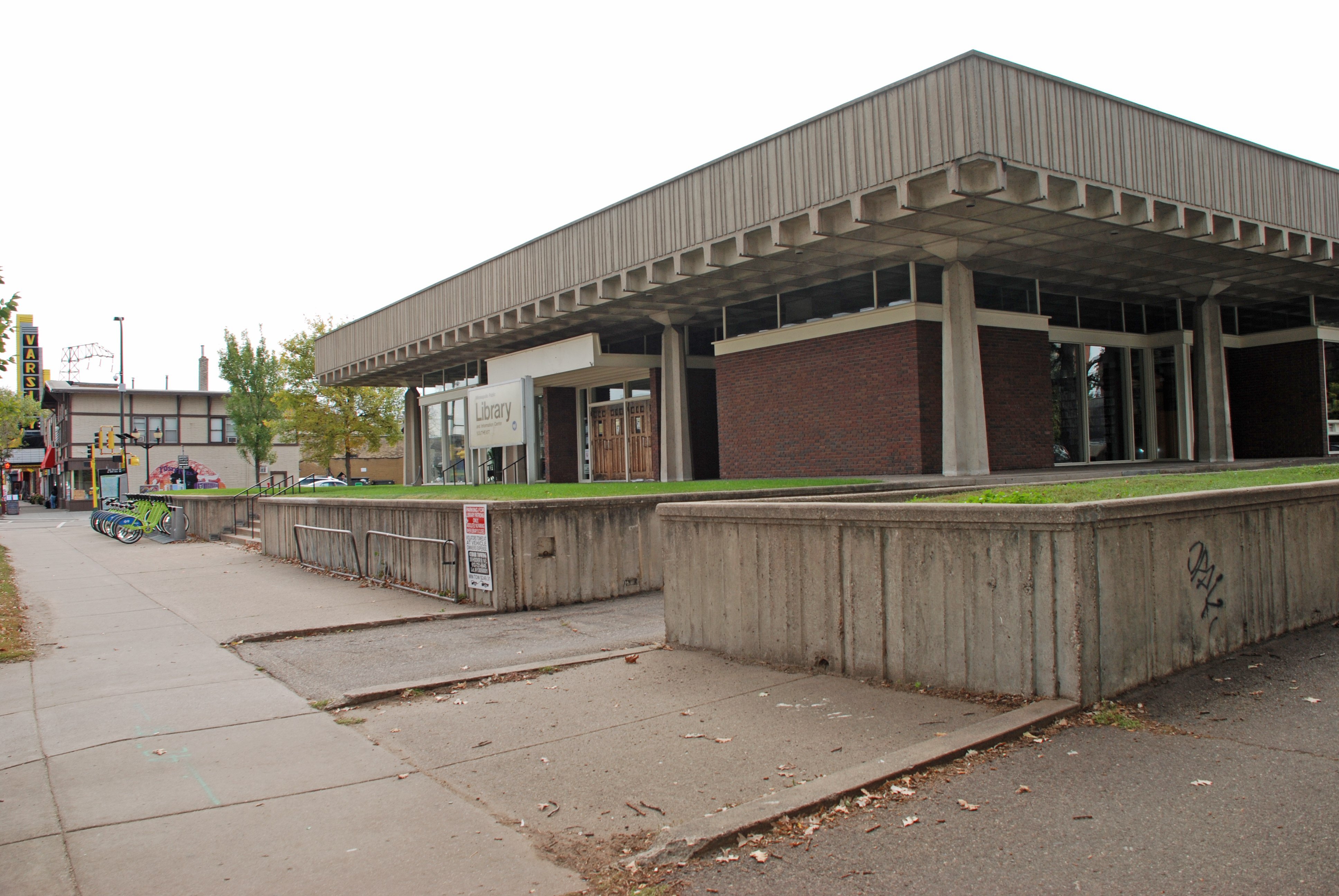 (Photo by Bill Huntzicker) The Southeast Library, designed by the late Ralph Rapson to be a credit union, has operated in its Dinkytown building since 1967.

Dinkytown could soon lose its public library, but Hennepin County will ultimately decide if that’s worth it, or if they should replace or upgrade it.

The four neighborhoods that surround the University of Minnesota in Minneapolis are underserved by library services and space, said a consultant who organized a study that could be the first step toward determining whether the Southeast Library at Dinkytown will be updated or replaced.

Steve Kelley, senior fellow at the University’s Humphrey School of Public Affairs, was the lead consultant to coordinate the 25-member, four-month Southeast Library Engagement project for Hennepin County. He summarized their report on Dec. 15 to the directors of the University District Alliance.

Kelley said his report will be transmitted by Dec. 31 to the Hennepin County commissioners and the library administration, which will decide whether to remodel, replace or close the current Southeast Library at 1222 Fourth St. S.E. Kelley’s task, however, was to discover what activities the four university neighborhoods – the West Bank/Cedar-Riverside, Marcy-Holmes, Prospect Park, and Southeast Como – need in library services and space, separate from any particular location.

His graduate student researchers and community meetings demonstrated a strong desire for a traditional library with stacks of books that can be browsed, with places to meet and study, and large and small meeting rooms.

Libraries are still strongly associated with reading, he said, and with children. “Southeast residents, particularly from the Marcy-Holmes and Como neighborhoods, miss the children’s activities in the library,” he said.

Computers and technology were also high on the list. People who want library computers also saw them as a way to connect with larger communities, both locally and globally.

“The report very clearly shows a desire for traditional library activities in addition to new ones, and in spaces that clearly require a library building,” Wallace said. “The report does not address location and does not either support or rule out the current library building.”

“There is also some discussion of ‘satellite’ library activities of various sorts in the neighborhoods, but not to the exclusion of a full-service library,” Wallace said.

Kelley said the report suggests some “mini-branch” libraries to improve physical accessibility, but with smaller stacks, less staff and fewer computers than a main branch.

Phill Kelly, interim executive director of the West Bank Community Coalition, said he agreed with the idea of satellite libraries, especially for West Bank and Prospect Park residents who do not have convenient access to the current Southeast Library. The Prospect Park light rail station would not help Cedar-Riverside residents get to a Prospect Park library any easier than they can now get to the central library in downtown Minneapolis, also on the light rail line, Kelly said.

When asked what made this neighborhood unique, Kelley said he could only offer his own opinion, separate from the committee report. “This library is near the University of Minnesota. It’s in a compact space with so much intellectual, artistic and creative talent. We could have patrons who are a resource to the library as well as the collections.”

All of the neighborhoods have a high percentage of immigrants – about 15 percent of the residents in Southeast– and even larger numbers on the West Bank with its concentration of Somali and Oromo residents, Kelley said. They could become heavy users of the library.

Kelley said partnering with other institutions may be necessary to expand library services. For example, the county could build a library and the university rent space in it.

Phill Kelly suggested that other partners, such at the Brian Coyle Center on the West Bank and the Textile Center in Prospect Park, could host the satellite libraries and help provide ways to staff them. And, he added, the University could add two stops – one on Cedar Avenue on the West Bank and the other on Fourth Street in Dinkytown to provide easy access for West Bank residents to the current library location. University officials have nixed that idea because of the already crowded bus line.

Wallace and Kelley expressed disappointment in the amount of public involvement, but the group met with each of the communities, and Kelly made an extra effort to have separate meetings to involve the different ethnic, age and community groups on the West Bank.

“One disappointment in the process,” Wallace said, “was that there was very low community participation, even though the consultants scheduled meetings in each neighborhood, and varied the times to try to provide opportunities for input. The final report will provide some numbers in the methodology section, which has not yet been seen by the Advisory Committee.”

Katie Fournier, chair of the livability committee for the Southeast Como Improvement Association, said the study looked at what the neighborhoods want for services, what kinds of spaces they need, not where a building could be. “The location of a library was not even discussed,” she said. “But the consultants learned a lot about what people want in a library.”

Architect Richard Venberg, a committee member from the Como neighborhood, advocated that people build Little Library houses in their front yards. The small houses on a post ask patrons to take a free book and leave a book. Venberg said he’s built one in front of his home and another in his neighborhood. “I’ve seen people gathering and visiting there,” he said, suggesting a big library is unnecessary.

“The inclusion of Cedar Riverside as part of the study area was a contentious topic for many,” the draft report states. “Contradicting views were expressed at public meetings and also represented on the advisory committee concerning the neighborhood’s involvement. However, the position taken by the authors of the report reframes the conversation to be about what Cedar Riverside has to offer this process and this library, rather than what it detracts from other neighborhoods.”

And it emphasized transportation needs, particularly for the West Bank. “Demand for the improved access … was resoundingly articulated in nearly all aspects of engagement. This may be an ironic finding for a project committed to visioning, so the conclusion is all the more potent. The county should weigh these demands as serious priority in any future consideration of the SE Library’s future.”

“The Cedar Riverside community has many assets that can only improve the services of a community library modeled around social connections – including expansion of the knowledge network, volunteers, institutional staff and capital, community space, etc. Engagement in this neighborhood realized a community that is conspicuously eager and excited about library and learning services. Ultimately, the conversation should not be an “either-or” decision, but how all neighborhoods can be mutually strengthened by the resources of each.”

At a working session the previous week, several participants suggested that the unique qualities and needs of each neighborhood, not just Cedar Riverside, be discussed in the report.

The current Southeast Library building was designed by the late local architect Ralph Rapson and originally functioned as a credit union for university and state employees. It opened as a library in 1967. A consultant’s report said the building remains sound, despite needs to improve accessibility and other issues.

Clarification: The lead sentence was altered to clarify all the options Hennepin County has for the library.