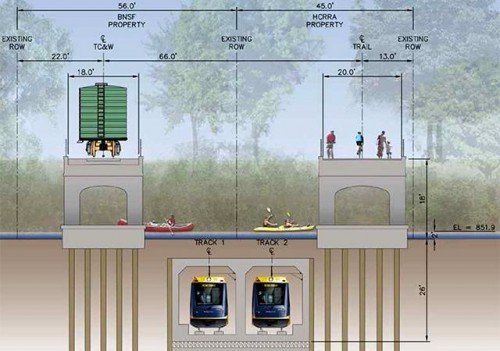 Is there anything new to say about the Southwest Light Rail? Everything and nothing, sound and fury. Angst and ennui.

OK, but even though much has been said, I still think people get the conversation wrong most of the time. I’d like to see a different discussion taking place.

The Southwest Light Rail Debate is NOT about Bikes

It’s been de rigeur to suggest that the SWLRT debate is about a fight between a light rail line and a bike path. For example, this is how TPT/MPR framed the issue in their recent semi-sorta-humorous video summing up the debate in a mere three minutes..

One problem with this narrative is that the Southwest Light Rail debate has almost nothing to do with bikes. Sure, there’s a very nice and pleasant bike path in the corridor right now. But the world of Minneapolis bicycling is far removed from the Southwest Light Rail project because the scales of money involved are vastly different, by at least a couple of orders of magnitude

A few years ago, Roger Geller, the bike planner for America’s #1 Bike City Portland Oregon, was in town to talk about how to build a bike plan. He mentioned that Portland’s entire network of bike infrastructure — the sum total of all of its bike boulevards, bike lanes, bike trails and bridges throughout the entire city — had been built for $60 Million. That’s the cost for everything!

Compare that to the cost of the SWLRT shallow tunnels, which are currently projected to cost between $150 Million and $200 Million, all ostensibly to “save the bike trail.” For that sum of money, not only could we construct a quality bike trail somewhere nearby, we could build a Seattle-esque system of cycletracks, bike boulevards, and trails all throughout Minneapolis. For that amount of money we could build bike infrastructure that might double or triple the amount of bicycle ridership in the city.

The bike trail is merely a convenient fig leaf for a bunch of other SWLRT issues. Most any bicycle advocate that I know would gladly trade the Kenilworth trail for a game-changing increase in bike funding. I wish that was on the table.

Southwest Light Rail IS About a Broken Federal Funding Mechanism

My friends over at Strong Towns have spent years making a convincing case that our system of transportation funding does more harm that good. For example, in a post about “the Federal Role”, Strong Towns head Chuck Marohn writes:

Let me point out one other thing about federal spending: it comes with some pretty bizarre strings, especially when it gets down to the local level. I’ve written extensively on how, due to federal money and all of the accompanying incentives/standards, my hometown just finished … a $9 million mile of STROAD. The STROAD design was a requirement of the State Aid standards, the mechanism whereby the federal funds are dispersed. The alternative project — a locally-funded and far more neighborhood-friendly street costing $1.2 million — was rejected because it actually cost the local taxpayer more (in terms of cash today, that is — nobody ever discussed future maintenance).

That’s just one example; Chuck has many more.

The more I think about the Southwest Light Rail, the more I gape upon the Kafka-esque situation we’ve created. If you look back at the planning process for the line, each individual decision seems justifiable. For example, even though I disagreed with it, the pivotal routing decision in 2010 made sense according to the rules in place at the time. The same holds with the tunnel decisions happening now, the noise mitigation decisions, any number of smaller details, or the Hobson’s choice facing Minneapolis politicians.

Most everyone admits that the project as a whole is borderline absurd. If given a blank slate, nobody would decide to spend hundreds of millions to build tunnels through a forest. And yet it’s probably going to happen anyway! And why? Because there’s so much Federal money on the table. Cities and politicians are extremely reluctant to turn away $700+ Million in Federal funding (and for good reason).

The Southwest process reveals why the Federal funding system forces people to make bad decisions. Imagine gathering all the Southwest Light Rail “stakeholders”* in a room tomorrow — all the Kenwood and Kenilworth folks, all the folks from North Minneapolis, all the Uptown urbanists, and all folks from Saint Louis Park and Eden Prairie. Imagine sitting them down and saying “Here’s $1.5 Billion, go plan a Light Rail line.” I’m sure they’d agree on a much better solution than our present pickle.

Chasing Federal dollars forces cities to make bad decisions, and it’d be great if we had another system that provided cities with more freedom to plan their own solutions to their own problems.

And there you have it. The Southwest Light Rail is not about bikes, it’s about a system of Federal funding that forces cities to make dumb decisions. It reminds me of my favorite scene from The Magnificent Seven, only nobody knows which character they are.

[From parking meter reform to funding, Steve McQueen has had a lot of good urban policy ideas.]

*Note: This is the first and last time I’ll use the word “stakeholders” without irony.