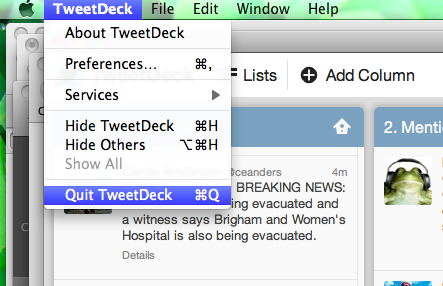 Like many people across the country, I was at work on Monday when the Boston Marathon was hit by a deadly attack. The nation’s attention was riveted on the tragic scene unfolding in Copley Square. There was nothing we could do except watch, hope that the worst was over, and…talk. Talk on Twitter, talk on Facebook, talk on Tumblr.

Many expressed condolences. Others voiced anger. News was rapidly shared as facts became known about the nature and scope of the attacks. Many simply read the news, and kept their thoughts to themselves.

For those of us whose jobs involve online communication—journalists, bloggers, publicists—events like the Boston attacks present a special challenge. Most of us had no unique information to share, and our jobs were not directly affected by the attacks. What does one say when people are in no mood to think about things that suddenly seem trivial—like plays, music, and fashion?

At a minimum, we have to exercise discretion so as not to seem insensitive. With post scheduling software becoming increasingly popular—the Daily Planet, among many other publications and brands, schedules some of its tweets and Facebook posts hours ahead of time—those who have scheduled posts are quickly learning to scan their scheduled posts for anything that might seem inappropriate in the wake of a national tragedy. (“It’s a beautiful day! Here are some fun events happening tonight…”)

Brands and publications hear quickly from their followers when they fail to appropriately modulate their social media posts when cataclysmic events are unfolding. Certainly, any attempt to make reference—especially joking reference—to sad events by way of promoting an unrelated story or sale is completely wrong, but even run-of-the-mill promotional posts can be seen as insensitive. “How anyone—brands, looking at you—is posting anything but condolences is beyond me,” tweeted Minneapolis social media strategist Jen Boyles on Monday afternoon, earning a handful of retweets by those who agreed with her.

Condolences can be appreciated, but they can also seem glib. Why would anyone assume a Minnesota arts blogger is not thinking of Boston when terror strikes? It may be best, then, to err on the side of a respectful silence.

Eventually, of course, life must go on. How soon is too soon to tweet about, say, a new book or record? How soon is too soon to publicly laugh about something unrelated? Each person has to decide for himself or herself. For me, that time came when the Pioneer Press published a story about the Guthrie Theater’s newly-announced season, with the redundant headline “Guthrie Theater focuses on theater next season.”

When I saw that headline, I thought of a cartoon by the late Leo Cullum, one of the first cartoons published by The New Yorker after 9/11. A woman, sitting at a bar, turns to a man wearing a loud checkered sport coat and says, “I thought I’d never laugh again. Then I saw your jacket.”