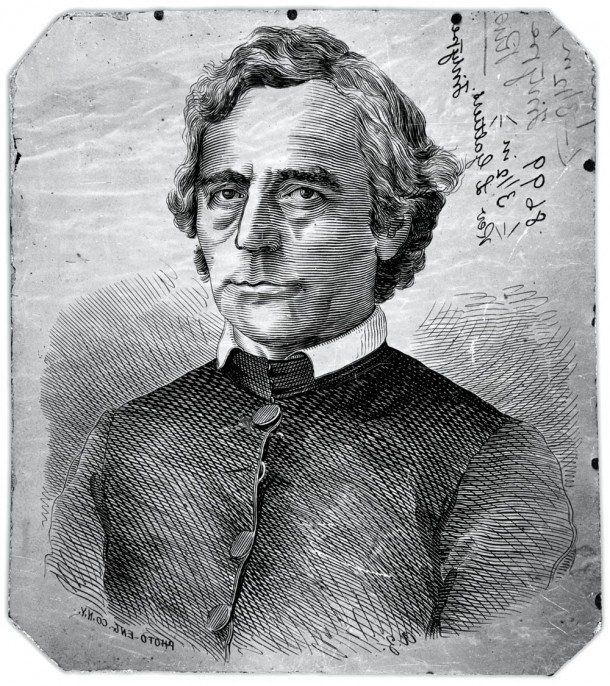 Mr. Twain was right. Such is the case with Saint Paul, which grew up around a wild and wooly little tavern known as “Pig’s Eye Pandemonium.” The tavern keeper was Pierre “Pig’s Eye” Parrant, a cantankerous old French Canadian fur trader of dubious morals and character whose favorite hobby seemed to be keeping the soldiers at Fort Snelling as drunk as possible. Parrant had one squinty, blind eye surrounded by a pinkish color giving “a piggish expression to his sodden, low features.”[2] So they took to calling him Pig’s Eye. Parrant and other squatters had been living within Fort Snelling, but the commander, Major Joseph Plympton, got so fed up with this motley bunch that he kicked them out—twice. The second time, Plympton burned their houses down just to demonstrate he was serious. Undeterred, Pig’s Eye set up his whiskey still just outside the fort on the banks of the Mississippi in what is now the Lowertown area of Saint Paul.

In 1837 the whiskey bottles were uncorked in Pig’s Eye Pandemonium, and the wild little town that would become the city of Saint Paul was accidentally born. Since the town had not actually been planned, no one bothered to name it. But Pierre Parrant was very infamous up and down the mighty Mississippi, and the town soon became known as “Pig’s Eye Landing.” A few years later, Father Lucien Galtier came to town to build its first church. In his dedication speech, he implored the young city to change its colorful but dubious moniker. And so the town was renamed in honor of a more respectable establishment, Father Galtier’s church, Saint Paul the Apostle. James Goodhue, Saint Paul’s first newspaper editor, declared: “Pig’s Eye, converted thou shalt be like Saul; Arise and henceforth, St. Paul.”[3] Perhaps Mr. Goodhue was relieved he didn’t have to name his newspaper the Pig’s Eye Pioneer Press.

As Mr. Twain stated, Saint Paul was founded on the power of whiskey, but its status as political center was nearly lost until once again, whiskey and a wily Frenchman came into the picture. Saint Paul had been the capital of the territory, but some wanted it moved elsewhere when Minnesota became a state. Territorial Governor Willis Gorman especially hated Saint Paul due to political disagreements and a bit of greed. He was determined to make the capital St. Peter, where he happened to own a lot of land. Governor Gorman nearly got his way.

In 1857 the territorial legislature passed a bill making St. Peter the new capital. But the governor had not counted on Representative “Jolly” Joe Rolette, another colorful French fur trader who happened to love Saint Paul. And he also happened to be the lawmaker in charge of bringing that bill to the governor to sign. Instead, Jolly Joe and the bill disappeared. Legend says Joe snuck into a local hotel where he partied for days eating fine foods and getting rip-roaring drunk. By the time he emerged, the legislative session was over and it was too late for the governor to sign the bill. Not wanting to wait two more years for the next session, Minnesota accepted statehood in 1858 and Saint Paul became the capital by default.

So the next time you’re in Saint Paul enjoying a fine drink, raise a toast to two colorful Frenchmen and the power of whiskey.

Cynthia Schreiner Smith is co-owner of CyBick Creative, a video production company she owns with her husband, Bick Smith. She is most proud of their historical film Gangsterland, a documentary-style ­movie about the 1930s gangsters in Saint Paul. She has also worked at the Wabasha Street Caves since 1998, where her work as an historical tour guide complements her love of writing, history, and—of course—Saint Paul.