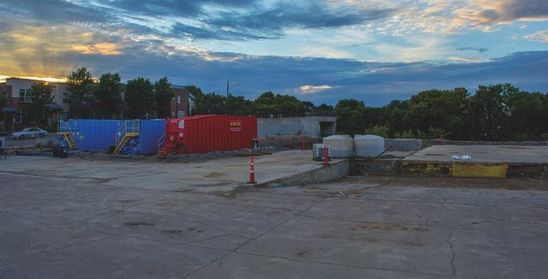 Contaminated rain water in tanks awaits what to do with it, at the former Superior Plating site. Photo by Mike Madison.

While the chromium leaching from saturated bedrock still discolors torrential rain yellow, and a potential developer gave up, active neighbors appear to trust the parties who are getting the Superior Plating site, 1st Avenue and 4th Street NE, ready for its next life.

And according to Third Ward Council Member Jacob Frey, that next life will be a building way above six stories, way above even 10, 11, or 12 stories. And there are “several developers who want to do concrete and steel 100-year solid” structures lining up to compete for the mixed use project (retail on ground floor, apartments above). “It will be spectacular,” Frey said.

No one’s saying who those parties are.

But back to the ground and ground water. The Nicollet Island East Bank Neighborhood Association (NIEBNA) hosted status reports Aug. 26 from representatives for the owner, First & University Investor, LLC (FUI), and the Minnesota Pollution Control Agency (MPCA) on the cleanup that’s underway.

There are two areas making up the two-block site. In short, at a meeting at Our Lady of Lourdes church, they reported that Block 16 of the St. Anthony Falls Addition, the land that used to hold the building, has been cleaned up to residential standards.

Robert Devolve, an attorney with Stinson Leonard Street representing FUI, said the other piece, Block 13, that was parking, has only “typical urban fill.” (It’s like what was on many other sites where housing now sits, Victor Grambsch, NIEBNA President, added later).  It does not need special attention and could be easily hauled away in the process of digging for a new building’s foundation.

After the Superior Plating company went out of business in 2011, FUI arranged to buy the building, a former bus maintenance barn, to get it ready for an eventual developer. They take responsibility for the cleanup on site and will continue pumping and treating ground water for an additional five years. (Superior Plating’s owners had been remediating for 20 years already). The State, the MPCA, agreed to take care of anything off site, primarily two groundwater plumes contaminated with trichloroethylene, TCE.

TCE, as State Representative Phyllis Kahn noted, is the same stuff that’s been released in the Southeast Como neighborhood from an old General Mills plant. It’s a common industrial solvent.

Gerald Stahnke from MPCA described the deconstruction and remediation that’s been underway since early spring 2014, and the surprises encountered.

Early on, vandals got in and started to pull out copper wire. Trouble is, the circuits were live. A decision was made to cut the power, so they had to rig generators to run the pumps collecting the leachate, various chemicals that had seeped into the ground around the plating lines.

“There was more structural wood than expected. Like modern day mechanic pits, there was a concrete floor, under that, wood, and then another concrete floor,” so the mechanics could walk below from bus to bus. When Superior Plating took over, they stored a lot of their waste between those floors.

“And they never really swept up after themselves,” Stahnke said. This year, when heavy vehicles such as buses went by, the dust kicked up in the street “pegged the meter” that was testing for harmful substances and particulates. Nine dumpsters full of material had to be treated with a reagent so that it was safe to transport and dispose.

Stahnke said the site was originally a quarry;  they discovered random rock that remained buried on the property, blocking the soil borings and yet not solid. Contaminants could collect under these rocks; now all of that soil and rock has been removed down to a point that is either clean to residential standards, or is bedrock.

With no building to deflect the rain, exposed bedrock which was saturated with chemicals is leaching them out when it rains, like what happens when you try to clean a paint brush.  When a new building, parking lot or other hardscape is built, it will again cover the area, and pumping would resume: it’s expected that within five years the contaminants will be at a safe level.

Stahnke said the blue tanks on site now hold water collected from the site and along the railroad tracks below during the June 20 rain. They’re trying to decide what to do with the contaminated water.

One of the biggest surprises was “the missing west wall” at the University Avenue bridge. “The stone (foundation of the building) goes to bedrock everywhere else,” Stahnke said.

He added they have tried various approaches and will likely end up covering the site with heavy plastic and sandbags for interim protection.

Devolve said FUI has budgeted $6 million for cleanup. MPCA representatives mentioned spending an extra $67,000 for a survey and $27,000 for a pump out in July. Stahnke talked about the July 31 funding cycle for Superfund sites, each year that’s when money is released; some money for Superior could be taken from other sites, too.

What neighbors want to know

During Q & A, Candace Sykora, also on the MPCA team dedicated to the project, assured the group that they would keep monitoring and work “at the speed of business” when a motivated buyer is identified, to keep a deal moving. She explained that Block 13 would be “deed restricted” so that the new buyer would have to get their plan for removing the fill approved by MPCA.

Several in the audience suspected that Block 13 was too quickly dismissed, that there might be more surprises; Stahnke and Sykora explained that trenches had been dug, allowing them to examine more than what soil borings would. They also did geotechnical analysis looking for underground tanks, and found none. The trenches have now been filled in. Sykora added that it is common to do environmental certification in phases. Site soil will be “de-listed” from the Superfund lists, but the groundwater plumes would continue to be on the lists.

State Senator Kari Dziedzic spoke briefly to say she was there to listen. State Representative Phyllis Kahn said she has been very impressed with the MPCA, and that the legislators would continue to follow the issue very carefully. “If you have trouble getting your questions answered, we will use our clout.”

Grambsch closed the meeting noting that the NIEBNA small area plan will soon be approved by the Minneapolis City Council and sent to the Metropolitan Council.

The Superior Plating Site “is in the Small Area Plan designated as high-density mixed use. There may be a false start or two. There was one,” he said, referring to Florida-based developer DLC Residential backing out earlier this year. “While there may be no changes in the next few months, there has been lots of interest.”

When there’s something more to consider, a task force consisting of nearby neighborhoods, business groups and government representatives will be called back together.

A slide presentation that was not available for the meeting will be posted on the MPCA website and on niebna.com. 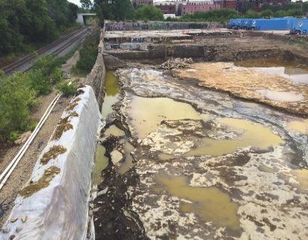 Water at the back of the lot after a rain. Photo by NIEBNA board member Jeffrey Sheehan, who lives in the townhomes across the street.