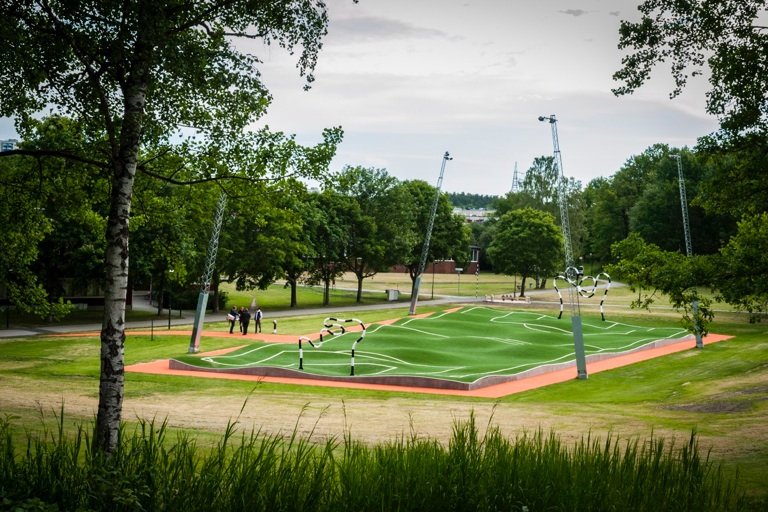 The midfielder is moving the ball through the center circle. He’s dribbling past a defender, looks for a teammate, passes the ball and it stops because of a bump in the field, right in front of the eighteen-yard box. Welcome to the game of Puckelball.

The innovative playground-style sport may be making its debut in the United States next year. Local soccer non-profit Joy of the People (JOTP) and Swedish artist and Puckelball inventor Johan Ström are planning on installing one of the bumpy soccer fields in St. Paul as soon as 2015. It will be the third field in the world and the first one outside of Sweden, and would cost around $500,000 to build.

Ström teamed up with St. Paul nonprofit Joy of the People, who will be paying for the field, and presented their idea to the public on Nov. 18 at Urban Growler brewery.

“We like to relate sports to life but a normal soccer field does not represent life properly,” Ström said. “Life is not smooth and even, you never know where the ball will bounce. Sometimes it is just not fair.”

Puckel means “bump” in Swedish, and Ström said bumpy soccer fields better represent the unpredictability of life. The two goals may not be the same size, he said, the field may be asymmetrical, and of course, there’s a lot of bumps.

No Puckelball field will be the exact same, he said, because he wants each field to be custom-fitted to the environment they’re in.

“I don’t want the fields to be just another sports field in the neighborhood,” Ström said. “I want them to be something that makes a difference in a community and that creates new opportunities in certain areas.”

JOTP artist director Ted Kroeten said they approached Ström after they learned about the sport and realized it aligned with their own ideals.

“You need to play before you can compete,” Kroeten said, “We lost the idea of play.”

Youth soccer is a multi-billion dollar industry, he said, but people have lost the idea of play because they’re too focused on competition. A lot of kids end up quitting soccer by 18 because of this, he said.

Puckelball can be soccer on a bumpy field, Ström said, but there really are no rules. Kids can play soccer, climb on the goals, or just dance, he said.

JOTP tries to reintroduce the joy of free and unstructured play as an alternative to coached and competitive soccer, Kroeten said. “To turn into great players, children have to play the game without being told what to do,” he said.

Ström said the bumpy fields also even out players’ skills. “It neutralizes individual players’ special skills and talents. In fact, the bumps make it smoother,” he said.

Separating kids by skill can ruin experiences and even friendships, Ström said, but when people are playing on a Puckelball field everyone can be on the same level. Brazil is so good at soccer because they develop their skills on the streets, rather than in organized sports, he said.

Ström said two other cities in Europe asked him to build Puckelball fields there, but he decided to do it in St. Paul because he believes his fields can make a difference in communities that need more opportunities. He doesn’t want to build them in places that already have tons of opportunities, he said.

But Puckelball is more than just a playground or sports arena, he said, they’re also works of art. “The fields are pieces of art, they are sculptures. That’s what I would want them to be seen as.”

This story was written by a Twin Cities Daily Planet intern for the TCDP college internship program. This is one of a number of articles produced by student interns at the TC Daily Planet.