When it comes to climate, at least, Tuesday was proud day. For the first time in awhile, politics stepped out of the destructive, short-term mindset into an open-minded, holistic view of the future. President Obama outlined a sweeping plan to tackle climate change in the U.S. and across the world. 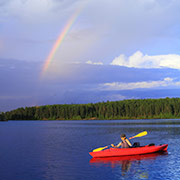 The President wants to put America at the helm in directing international climate change mitigation and adaptation. Domestically, he wants to up fuel-efficiency standards for cars and reduce our wasteful energy consumption.

The biggest part of Obama’s climate change plan is to reduce America’s total carbon footprint. There are many ways this can be done, but his speech focused on reducing emissions from dirty power plants. This is a big step for our nation, as 40% of our carbon dioxide emissions come from these operations, especially coal-fired plants.

It is also a big step forward for the state of Minnesota. The effects of climate change on Minnesota are real. This new plan calls on all states to develop plans to fit into the renewed push for carbon reduction and the clean up of power plants. Fortunately, Minnesota has been proactive about mitigating climate change’s impact, with several strong pieces of legislation protecting our air, water, and land. Although our electricity generated from coal has dropped from 57.3% in 2009 to 53% in 2011, a lot of work still needs to be done.

Economically, Minnesota has the ability to help lead the nation on renewable energy capacity building. Minnesota currently ranks 4th in wind energy production and with our revised renewable energy standards, we are better situated to take advantage of solar power. Additionally, by relying on internal energy production, we save the state money by not having to import coal from other states, such as Montana or Wyoming.

The health benefits are far-reaching. Minnesotans pay a price every year for the health damages caused by power plants. In 2011, over 100 Minnesota deaths were attributable to fine particle pollution from power plants. Asthma attacks grew significantly, as did heart attacks. The health effects of greenhouse gas pollution have been well documented and this new plan helps hold the state accountable to not just our current citizens, but future generations as well.

Environmentally, this plan helps Minnesota preserve our irreplaceable natural resources from further degradation. Not only does our air suffer from dirty power plants, but our water as well. In 2010, Minnesota emitted 873 pounds of mercury pollution onto the Great Lakes. Mercury bio-accumulates through the food chain, rendering our fish inedible. Minnesota’s environment is our greatest asset and this climate plan should help bolster Minnesota’s work in this area. “The Minnesota Mercury Emissions Reduction Act of 2006, when fully implemented in 2014, will result in a 90 percent reduction of emissions from six generating units at three of Minnesota’s coal-fired power plants,” according to a 2012 NRDC study.

I am excited that we are putting climate change back on the table. With Congress intent on inaction, it is up to the President to use his legal authority through the Clean Air Act to help get this nation on track. And it means good things for Minnesota citizens and our environment.