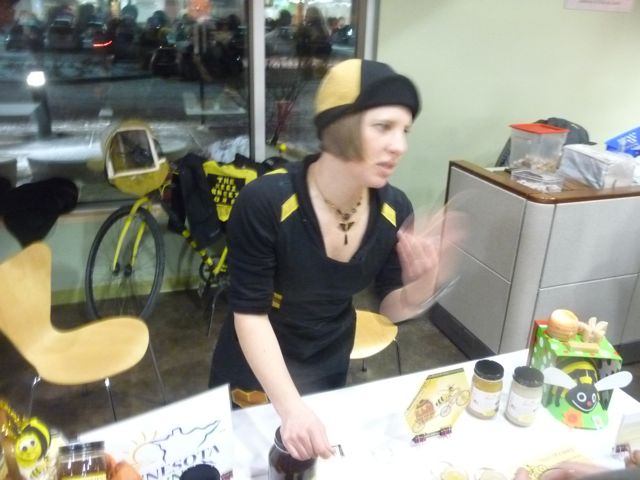 I had a fun time last Friday at the North Coast Nosh III, the Heavy Table’s annual celebration of local (Minnesota and Wisconsin) food and drink. About 20 different producers offered samples of their wares, ranging from the Bogart Loves bakery and the Burnett Dairy Cooperative to the Patisserie 46 and Peace Coffee.

I sampled nearly everything, except for the curried braised beef and other offerings from Gai Gai Thai – the crowd around their table was so big that I couldn’t elbow my way to the front. I also found out that Gai Gai Thai – a regular at the Kingfield Market, during the growing season – now offers a “pop-up lunch service at Patisserie 46 on Thursdays. The Patisserie 46 station also drew big crowds, for an assortment of chocolate truffles, macarons (not to be confused with macaroons) and other sweet treats.

At the Beez Kneez Honey station, I met owner and beekeeper Kristy Lynn Allen (pictured above), and learned that she delivers honey by bike anywhere in Minneapolis. The honey is raw and unprocessed, and comes in four different flavors – clover and basswood; wildflower, buckwheat, and vanilla bean wildflower. It’s also available at the Linden Hills and East Side Coops, and at the Midtown Freewheel Cycle.

Allen’s a woman on a mission –  to educate youth and their communities about bees while increasing the urban bee population. This summer, she’ll be working with University of Minnesota entomologist (and MacArthur Fellow!) Marla Spivak and Erin Rupp from the Bell Museum on a new project called Community Bees on Bikes, a bicycle-powered urban beekeeping program that will deliver hives to half a dozen locations around the Twin Cities.

As a beer lover, I am excited by the explosion of local craft breweries, following in the footsteps of Summit and Surly. Summit was on hand, offering tastes of their regular and seasonal beers, as were Harriet Brewing, Lift Bridge and Lucid. I got to try their seasonal Dark Abbey Belgian-Style Dubbel, a medium-bodied brown ale with complex flavor notes. Harriet Brewing will be celebrating their one-year anniversary on January 27 with a party at the Blue Nile that they are billing as a 12 Tap Takeover. It’s also a release party for their newest brew, Elevator Doppelbock. Tickets are $8 in advance, $10 at the door. Lots of music, too – details at http://www.harrietbrewing.com/.

The only thing I don’t like about the new craft beers is that so many of them are so high in alcohol – often 7.0% alcohol by volume or more. I learned to love Pale Ales in England, where you could while away a very pleasant evening drinking pints of bitter, one round after the other, and still make it back home without too much damage. That’s why I especially liked Lucid’s AIR, a nicely balanced brew with a hint of citrus and only 4.2% alcohol. They also poured tastes of their CAMO, an Imperial Pale ale that comes with a warning:  “Be careful because at 9% alcohol, this beer will sneak up on you fast.”

Plenty of pork was on hand, from haute cuisine to haute dog. The gastronomic end of the pig repertoire was represented by Green Ox Provisions, the new company formed by Kieran Folliard with Mike Phillips, formerly chef at the Craftsman. (Kieran, former owner of Kieran’s, The Local, The Liffey, and The Cooper, is also the proprietor of 2 Gingers Irish whiskey, which is another story for another day.) Phillips and an assistant offered up quite a spread of dry-cured hams, pate, rillettes and more. Not far away, Nate Beck, proprietor of NateDogs, offered up two versions of the American classic – a steamed brat and a wiener, served in a bun with Surly mustard and homemade sauerkraut.

(Shameless self-promotion: both Green Ox Provisions and Nate Dogs will be sampling their wares at the Twin Cities Daily Planet’s Winter Party and Sausage Fest, along with The Black Forest,The Butcher and the Boar, Clancey’s Meats, Kramarczuk’s, the Modern Cafe and the Sample Room at the Summit Brewing Company. Tickets are $15, and going fast – click here for details.)

I also had a chance to learn a bit more about Open Arms of Minnesota, which prepares and delivers meals for people with HIV/AIDS, MS, ALS, breast cancer and more than 55 other diseases. I didn’t know that, with the help of over 1,400 volunteers, they cook, pack and deliver more than 425,000 meals each year. Or that they planted a two-acre garden this year that produced a lot of the vegetables served last summer and fall. Open Arms received a portion of the proceeds from North Coast Nosh III, and they have their own fundraiser coming up this spring – the 8th Annual Moveable Feast, to be held Thursday, May 17 at the Westin Edina Galleria and more than 45 Twin Cities restaurants.