For those who are Theravada Buddhists, it’s time for khao pansa (lent). I’m not the perfect angel but I do have my ‘desires’. I don’t smoke. I drink wine. I don’t care for the latest gadgets or fancy purses. So while there’s not so much materialistic desires for me, the neo-Buddhist in me wanted to dig deeper into the triggers for the unnecessary desires in my life. There are many daily activities and choices that I make, which tend to cultivate a negative mindset and a clouded spiritual journey for how I live my life. I wanted to break the bad habits that have been debilitating for my psyche and aura. What is it, really?

As I thought more and more about it, I found myself having a tendency to complain. A lot. Not just of the real world issues but the little mundane and insignificant things that only a person from a developed and strong country as America would complain about. I hate snooty hipsters. I hate when I don’t get my food in less than 15 minutes at a restaurant. I hate when I have to use the gas station toilet. First world problems, they say. It’s a fact that’s the society we’re raised in. As a Lao American, I was told why my family made the journey here. We work hard and show for it. Through our Apple tablets, Coach purses, and BMWs. America tells us these materialistic desires and consumerist behavior is what drives our economy and meets our need for social gratification.

It’s the antithesis of humility. That’s against what makes most of us Buddhist to begin with. So we tend to balance these desires in a way that we feel satisfied enough with our reconciliation of that conflict. Whether we stick with a cheap flip phone rather than the latest iPhone, it’s a way we can feel settled with ourselves. 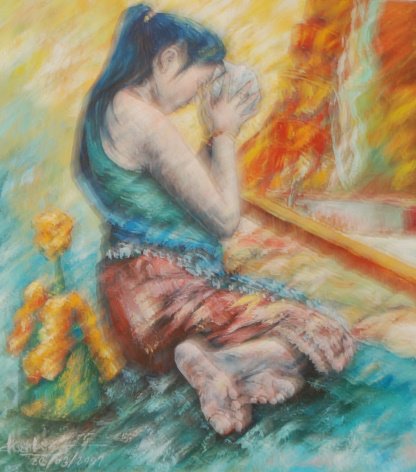 In Laos, there’s an ironic complexity. When I was living there for three months, the materialistic desires weren’t apparent, unless you were in the capital of Vientiane, where there are pockets of wealth. The inequity gap is the widest it’s been, but the rest of impoverished Laos rests content with what they have, even if it’s minuscule grains of rice that allow them to survive. Sure, they wish for a better life like everyone else, but they are happier than I am. The Lao are known for a sense of humility and a care-free attitude. That’s why we say in Laos, people ‘yoo sabai, sabai’ (live comfortably). Here in America, the Lao who were privileged enough to have what they want, need and crave social status. It’s as if we want to erase the impoverished rice field hat-wearing persona that the rest of the world had been characterizing us in.

As Lao Americans, we have privileges that those in rural Laos could only dream of. We shuffle our temptations into areas we think identifies us as All-American, yet we will work 24/7 on the assembly line just for fancy purses, fast cars, and the biggest array of seafood buffet. But as Buddhists, is this healthy? Does this lead us to reach a place of enlightenment?

As my fellow Buddhists gather across the globe at their wats (temples) to mark the beginning of khao pansa, we should ask ourselves: what am I giving up this year? Will it remove the barrier to my sense of humility and compassion?

This year, I’m giving up complaining and letting the positive energy breed organically. What are you giving up this lent?

At top: Video clip of a typical sight of Theravada Buddhists during khao pansa