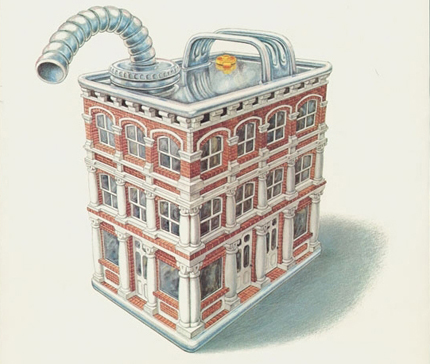 When I was a loan officer and I had someone who wanted to refinance, I always showed my borrowers what I called the “break even point.”  That is, if a refi saved $100 per month but closing costs were $4,800, then the person would need to stay in the house with that loan for four years before the refinance paid for itself.  If the borrower wasn’t comfortable with that number and we couldn’t make anything better work, I recommended that they not do the loan – even though this meant I sacrificed many a commission.

(Mortgage terminology for newer homeowners:  A “refinance” was when banks used to extend credit in the form of a new loan that would pay off your existing mortgage.  It sounds crazy, I know, but it happened at one time.  They would examine things like your credit, income and equity, and then actually do a loan.  Oh yeah, “equity” was this thing when your house was worth more than what you owed.)

So when we talk about “green” construction, a pertinent question would be: How much energy was spent or lost in the demolition and new construction?  If the new house performs more efficiently than the old one, then how long before that performance difference breaks even with the embodied energy?  If that time frame is longer than the anticipated lifespan of the new house, was the demo/new construction worth it from an energy standpoint?

I’ve asked questions like this before on my blog, but hadn’t found good studies or received satisfactory answers.  But this week, someone emailed me a calculator that tabulates embodied energy.  I find this toy fascinating to play with, but without enough technical knowledge I can’t say how useful it might be.  The site itself is clearly biased towards preservation – a bias I personally agree with.  However, that bias seeps into the writing though claims that new construction is “visually jarring” and “more than double [the square feet] of an existing home.”

The calculator also shows how long it would take the average person to produce the equivalent of trash/debris left from a home demolition.  To me, the comparison of embodied energy and gallons of gasoline falls short.  It’s like asking who would win in a fight – the Milennium Falcon or the Starship Enterprise?  The motorcycle from Tron or Akira?  These are completely different things, and you can’t always compare them.  Even so, this calculator gives people a starting point in evaluating the full energy costs of demolition.

(Image from the National Historic Trust)