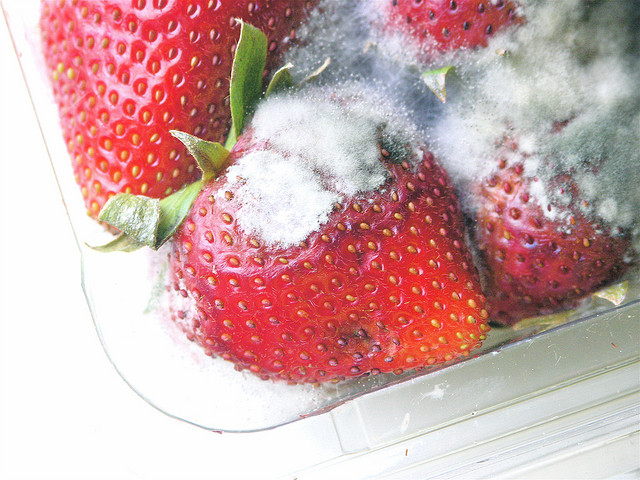 I hate throwing away food, but sometimes … I bought the lettuce and strawberries with the best intentions in the world, but we didn’t get a salad made and they migrated to the bottom of the produce drawer and now — YUCK!

So I pick through the rest of the produce drawer contents, wash what’s salvageable, and disinfect the drawer. My slimy lettuce and moldy strawberries become part of what Eureka Recycling says is an average of $96 worth of food per household that hits the garbage bin or compost pile every month.

This Saturday, May 18, at Minnesota Goes Green, Eureka will present a report on the financial, environmental and social impact of composting.

In a phone call today, Eureka spokesperson Dianna Kennedy told me the report is about more than composting — they want to focus on prevention first, helping people like me get better at actually eating the food we buy, rather than letting it end up in the compost pile. Eureka has just launched a website (Make Dirt, Not Waste) with  tools and tips to help.

According to a press statement:

Last year, Eureka Recycling provided the City of Saint Paul with a proposal for a comprehensive composting program—including education for prevention and returning compost to improve Saint Paul soils. The City wanted to conduct a public process to hear directly from residents before making decisions for the 2014 budget. .

That public process includes a not-yet-released report by Wilder Research and online feedback in the Open St. Paul Forum. (The time period for comments on the forum is now over.) According to Kennedy, in the Open St. Paul Forum, “60% of the folks chose composting as their first or second highest ranking from the choices provided. Of all the people who left comments, 3/4 of them are supportive of composting.”

Re-use is also a big part of the Minnesota Goes Green gathering, with a clothing swap called Alter/Nation — check out the rules here — and a repurpose contest, “Fix it, don’t nix it,” and more.

You can go to Minnesota Goes Green for free – click on the website to download a free Metro Transit pass. If you go in the morning, take along a bag and buy some FRESH lettuce at the St. Paul Farmers Market. Stop in at Black Dog Cafe and Wine Bar on your way home, and enjoy good coffee (or a glass of wine) and the satisfaction of doing your part to go green.