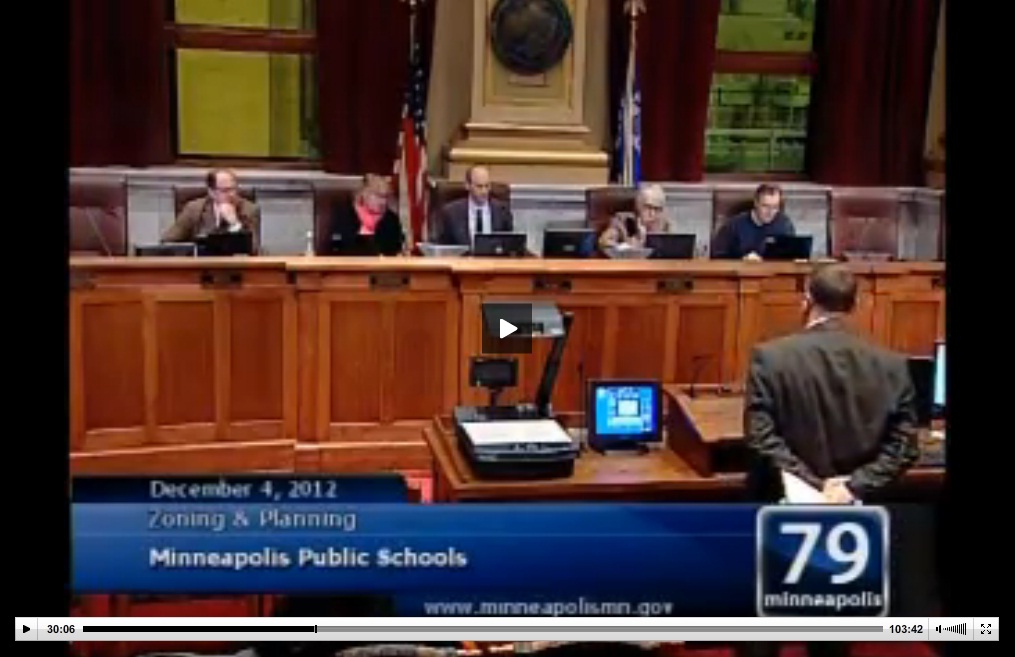 On Tuesday, December 4, the Zoning and Planning Committee denied the Minneapolis Public Schools ongoing request to pave over yet more land along West Broadway. CM Goodman led the charge, asking why land was taken off the tax rolls and yet the Public School system was still asking for more. She was later corrected about her understanding of how that acquisition happened, as the MPS had ownership of the parcels in question for some time.

Which brings me to a side point. The back half of the existing parking lot had some absolutely gorgeous houses on them. I remember gazing wistfully upon those homes, knowing they would be demolished, and wishing there was an alternative. Little did I know that an alternative to demolition did in fact exist. MPS could have put in half a block of parking behind their building, half a block on the site proposed now, and left between five and ten historic structures standing. (And, I might add, still on the tax rolls)

I’m not the only one who didn’t have the whole story. For instance, the MPS representatives didn’t even know…

…how many parking spaces they had at their former site on 807 Broadway NE. Nor had they provided city staff with updated plan revisions as requested. Metropass still hasn’t been fully implemented, and carpooling spaces are underutilized on site. And so the reward for MPS staff not utilizing transit alternatives is that the building administrators ask for even more surface parking in our neighborhood.

CM Gordon asked about why “structured parking,” i.e. a ramp, was not put in place, and was told it was not a good use of taxpayer funds. While it’s true a ramp costs much more than surface parking, at least it would reduce the current proposal to pave over seventy-five percent of the land the MPS owns. Any other employer of this size, such as a big box retailer, would be told that this amount of parking is not acceptable, so why should the MPS be treated differently? And is $1.2 million for the parking lot plus additional landscaping costs really a good use of taxes either?

One resident, Alissa Pier, spoke in favor of the staff and Community Planning recommendations to deny the appeal. She noted that nothing in the city’s comprehensive plan supports this level of parking. The additional parking doesn’t benefit the community, and the applicant hasn’t demonstrated a need. Although an MPS representative showed pictures of a full lot, Pier stated that she drives past the site 2-4 times per day and the last sixty feet of the lot are frequently empty.

(This blogger has the same experience. I drive past the lot two or more times a day myself, and have yet to see it near capacity. I would have testified as well, but work kept me away that day.)

She then posited that the only reason the parking is being requested is fear. Staff at the facility supposedly want to drive in, park in an enclosed lot, go into the building, have their lunches catered in (at least the catering has been done at times by the folks at the Avenue Eatery), and leave without ever setting foot on the same sidewalk as the rest of us. And if they don’t want to be in our community, we have plenty of folks on the northside looking for good employment opportunities.

Jackie Cherryhomes spoke in favor of the proposed parking lot. It should be noted that she is a consultant for the developer, but she claimed to be there in her resident and/or chair of the West Broadway Coalition capacity. She countered Pier’s claims by saying there have been reports of area businesses seeing MPS employees patronizing their shops. She also spoke highly of the new parking lot at Penn and Plymouth for Northpoint.

Goodman refuted the last part, noting that the Northpoint parking lot is temporary with the condition that a ramp be built within five years. The MPS site has no such provision.

CM Tuthill made a motion to uphold staff recommendation for denial, and advised residents affected to seek permit parking options. The motion carried 4-2. Tuthill, Goodman, Schiff, and Gordon voted in favor. Barb Johnson and Kevin Reich voted against. Samuels was present but not on the committee and did not vote.

In all of these proceedings, the most curious aspect is this manufactured sense of urgency. Why now? Why does this have to be done with such immediacy? The MPS owns the land. There is no chance anyone else will procure site control or begin other development. Ride share, Metropass, shared parking, biking, webinars, walking, and other alternatives to single-car usage haven’t been fully explored. I am at a loss to explain why then, the MPS needs the new parking so badly.

However, that isn’t stopping the MPS from appealing to the full council. They plan on bringing that appeal forward as early as tomorrow. If anyone wants a say in whether this happens, council members have to be contacted today.

Image is a screen grab from video of Zoning & Planning.