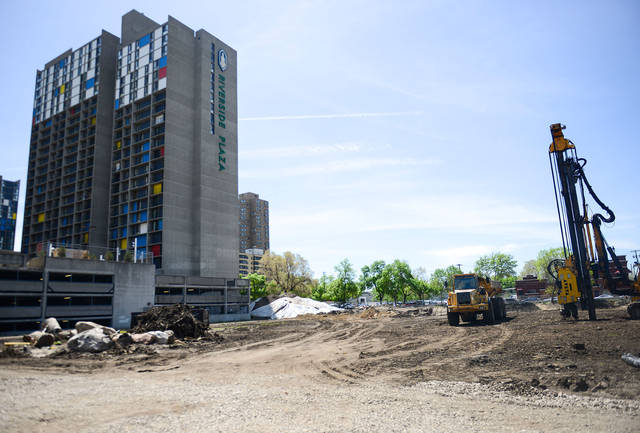 The area of land where Five15 on the Park, a half market rate and half low income housing complex, is to be built is bare and ready for construction on Thursday in the Cedar-Riverside neighborhood. (Photo by Holly Peterson)

After nearly a decade of planning, a new mixed-income housing complex is going up in the Cedar-Riverside neighborhood.

Construction on the apartment building, known as Five15 on the Park, started early last month. Supporters of the project hope the new housing complex will alleviate overpopulation and improve the area, while some residents are concerned it will bring more people to the already dense area.

The nearly $52.5 million, six-story building will be located at 515 15th Ave. S. and consist of 259 mixed-income units — about half of which will be one-bedroom apartments.

“People shack up with friends or family in other places waiting to get in to Riverside Plaza,” he said. “There’s a huge waiting list.”

The neighborhood isn’t unique in terms of its need for affordable housing. For every 100 low-income renters in Hennepin County, there are about 34 units available, according to a 2013 Minnesota Housing Partnership report.

“For people not to fall in poverty, they need affordable housing and to set aside income,” Ahmed said.

Despite most neighborhood residents’ support, some are at odds with the development.

“The critics of the project have argued that it will make the already high-density area even more high-density,” said David Markle, a longtime resident of the neighborhood.

With the opening of the Green Line light rail and the new Vikings stadium downtown, Ahmed said the apartments will bring visitors and business patrons from other parts of the city to the area.

Construction for the complex is underway, though it isn’t slated to open until fall 2015. Because the complex is in in its early development stages, Ahmed said questions remain about its effectiveness.

The complex might not help some residents because of some units’ small size, he said, and ideally it should have more two- and three-bedroom apartments.

“There are a lot of larger families here who don’t know if they’ll be able to live in this apartment,” Ahmed said.

Even with construction on Five15 on the Park in its early stages, residents and developers are highlighting the project’s impact, and some are voicing their concerns.

The project, which Fine said is going forward with the Muslim community in mind, includes rooms that may include partitions to separate men and women if they choose to pray, new green space and increased lighting in the area.

Though added lighting could make the area seem safer amid growing concerns about the neighborhood’s safety, Ahmed said, some residents are concerned that the building will block walkways near Riverside Plaza and take away already limited green space in the area.

Aside from the building’s amenities, the new janitorial and administrative jobs that it creates could benefit Cedar-Riverside residents, Ahmed said.

At the same time as the complex’s construction, projects like a $1.75 million Cedar Avenue sidewalk renovation and upgrades to the Cedar Cultural Center are moving forward.

“Cedar-Riverside is long overdue for a renovation,” Ahmed said. “[Five15 on the Park] will make the neighborhood more eclectic.”