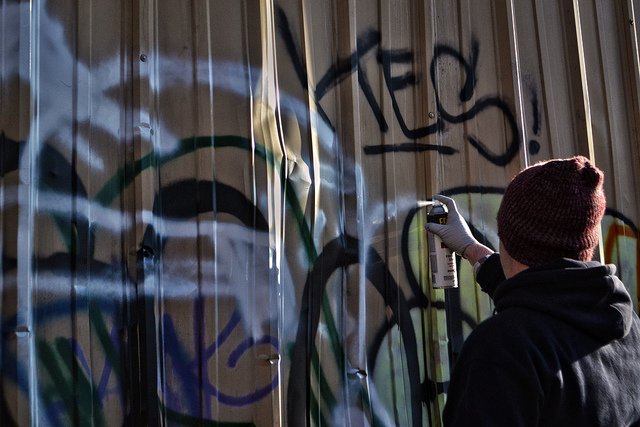 After Cedar-Riverside businesses complained for years that graffiti and street trash were deterring customers from the area, the West Bank Business Association banded together with other local organizations to clean up their neighborhood.

The WBBA is now gearing up for a second year of seasonal community cleanups to rid the area of graffiti and litter, said its executive director, Jamie Schumacher.

In 2015, the group plans to increase its quarterly efforts and sweep through the West Bank area on a monthly basis.

During cold winter months, Schumacher said the organization will coordinate future cleanup efforts so they can roll out as soon the temperature hits 35 degrees.

“In sunny optimism, you think, ‘Let’s start doing it in January,’” Schumacher said. “But January is very cold.”

Each season, she said, a rotating team of community members spreads out across Cedar-Riverside. Some groups come to every cleanup, she said.

The WBBA also launched a graffiti-prevention campaign, hanging posters that read: “We live here. We work here. We learn here.”

Because of Cedar-Riverside’s multilingual demographics, Schumacher said, the group decided to print the posters in a variety of languages, including Hmong, Somali and Spanish.

Those efforts mirror common community approaches to improve neighborhood aesthetics, said Ed Goetz, a professor at the University of
Minnesota’s Humphrey School of Public Affairs and director of the Center for Urban and Regional Affairs.

“The cleanup of trash [and] graffiti is really important for maintaining an atmosphere that seems welcoming,” he said.

Phill Kelly, interim director for the West Bank Community Coalition, was on hand at the recent fall cleanup.

“This is both a response to [a] need that is not filled as well as a community-building activity,” he said.

Kelly said he would like to see Cedar-Riverside be turned into a business improvement district — like that of downtown Minneapolis where a crew of ambassadors carries out tasks like pressure-washing streets, removing old gum from public spaces, patrolling sidewalks, and decorating the downtown blocks with baskets of flowers and twinkling winter lights.

“[It’s] one of the things our neighborhood has looked for,” he said. “This is kind of the volunteer version of that.”

But Kelly said that an official Cedar-Riverside improvement district can’t take off without approval from local area property owners. He said support has been lackluster because of funding concerns.

While the West Bank as a community greatly benefits from volunteer cleanup work, he said, the area’s issues aren’t isolated.

“It’s a pretty normal problem to have throughout the whole city,” Kelly said. “You see graffiti everywhere, you see trash everywhere and you see people throwing trash on the ground everywhere.”

Both Kelly and Schumacher said the cleanup effort has seen results just a year into its existence.