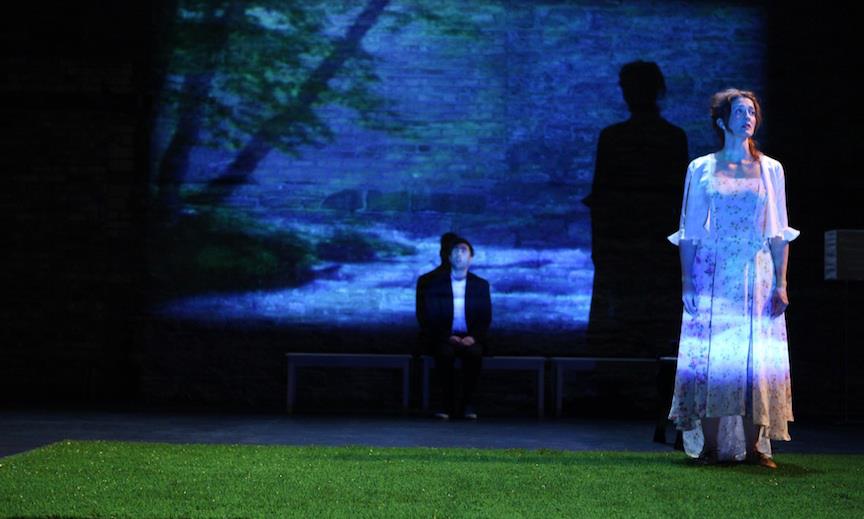 Nathan Keepers and Christina Baldwin in Werther and Lotte, the Passion and the Sorrow. Photo by Dave Rector, courtesy the MovingCompany.

“Werther is a wanderer, a man trying to comprehend the society in which he exists. Captivated by Lotte’s playfulness and compassion, he discovers that she shares his dream of a more empathetic, enlightened society.” What does it say about me, I wondered when I read that program note, that I had just been assuming he wanted to do the horizontal bop with her?

The MovingCompany’s new production Werther and Lotte, the Passion and the Sorrow is drawn from classic, brainy sources: Goethe’s The Sorrows of Young Werther, Thomas Mann’s Lotte in Weimar, and—just for fun—Rousseau’s The Social Contract. It stars Nathan Keepers and Christina Baldwin as the eponymous would-be lovers, soulmates who have been star-crossed by Lotte’s engagement to a respectable, safe gentleman.

The MovingCompany is the (relatively) newly-minted company led by Theatre de la Jeune Lune alumni Keepers, Baldwin, Dominique Serrand (director, and cowriter with Keepers, of Werther and Lotte), and Steve Epp. It’s hard to overstate the importance of the Tony-winning Jeune Lune (1978-2008) as a national pathbreaker and a beacon to Minnesota for a younger, more adventurous second wave of performers following the 1963 establishment and great success of the Guthrie Theatre.

That history makes each of the MovingCompany’s shows well worth paying attention to, but it also gives the shows a yoke to bear—a yoke that the company willingly shoulders and lets you know they’re shouldering. “We are a society of artists creating art,” says the company’s mission statement. “We regard theatre as an event. Our mission is to create and produce new and challenging theatre that builds on the past is grounded in the present and looks to the future.”

I’ve already contrasted the MovingCompany’s heavily theoretical (not to say pretentious) approach to that of younger, unproven and scrappy performers who come out swinging while the MovingCompany comes out “swinging.” The company’s approach is a better fit for this material, though, than the lighter stuff that constitutes The War Within/All’s Fair (being reprised this spring)—and for The Lab Theater, a big beautiful space that Serrand’s set occupies elegantly.

Werther and Lotte is one long Pas de Deux between Keepers and Baldwin, and though there are plenty of words, it’s the sights that dominate as the characters move from one stalemated tableau to another. They circle, they sit, they climb, they tip, and they sigh, as Baldwin again and again gently but firmly rebukes Keepers’s advances. Individual moments shine—a swing and a song (live music is provided by a small band), a precarious pile of furniture, scaled shadows on a rustic video projection by Devin Nee—but the adaptation strips the melodrama of its moving parts.

There never seems to be any serious risk that Baldwin will run off with Keepers, and without dramatic tension all we’re left with is the reverie. Wagner’s famously unresolved “Tristan chord” is a hallmark of his own opera about doomed love, but even Wagner knew not to hold that chord for 90 minutes. Keepers’s impish, petulant take on his character is also questionable: as he perches pouting on a chair, it seems unclear what the elegant and poised Baldwin would ever want to do with that.

These are among the Twin Cities’ most acclaimed performers, and Werther and Lotte certainly illustrates why—but one is left wondering why this living art seems so distant from, well, life.