Despite a rough start, most Minnesota corn fields are full and green, contributing to what the USDA predicts will be a “…record corn crop of 13.76 billion bushels in 2013…” 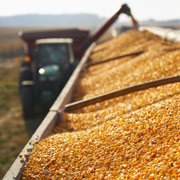 The crop will likely provide another profitable year for Minnesota farmers and help boost rural economies. But when you see these acres upon acres of tall green rows, you wonder if we’re relying too much on corn.

Corn is a simple choice. It is versatile, easy to grow and store, and in high demand thanks to an agro-industrial food system, a well intentioned, but flawed, focus on corn ethanol and plenty of federal support for corn growers. Today more than 30-40% of the corn grown is used in ethanol production, mainly because of federal mandates, which also drives up corn prices.

To keep the system churning, Congress poured more than $90 billion into corn subsidies from 1995 to 2010. Add on the fact that the crop insurance on corn ensures that you are relatively safe planting as much corn as possible (as you will receive money regardless); and as a farmer, it is nearly impossible to say no to growing corn.

The intense policy, and in turn financial, pressure to grow as much corn as possible means that an increasing number of acres are converted from other crops to strictly growing corn. In 2013, around 97 million acres of corn were planted. And because of the high prices, it is still growing. This creates a system where, instead of rotating different crops (soybeans etc.) to let soils regenerate and soil biota change, corn is planted season after season in the exact same spot. It takes massive amounts of fertilizer—in the magnitude of 5.6 million tons of nitrogen every year from chemical fertilizers dumped on corn fields. Farmers are also forced to convert riparian (vegetative areas surrounding rivers and streams) and other ecologically sensitive areas into corn fields, this greatly increases the probability of nitrogen to run directly into water sources.

Minnesota is already seeing the results of this intensive planting, according to a Minnesota Pollution Control Agency (MPCA) study. Southern Minnesota’s waters are suffering because of high levels of nitrogen pollution, with 73% of the nitrogen coming from agricultural runoff, and as much as 89-95% of river nitrogen coming from croplands. Farther down the Mississippi, there is a ‘dead zone’ size of Massachusetts in the Gulf of Mexico.

Relying on so much corn in the food system is unsustainable. Even with relatively high per bushel prices, large agro companies buy in such bulk, they’re still able to manufacture massive amounts of processed foods much cheaper than fresh, healthy fruits and vegetables.

While this system worked well in the past for feeding a growing nation recovering from World War II and the Great Depression, it has begun to show a negative side as well. Heavily processed relatively inexpensive foods, high in fat and sodium, are just another factor in our nation’s obesity and diabetes problems.

There are many effects from our agricultural policy choice of producing corn above all else. What can we do about it? Before we overreact, let’s realize corn does have an important role to play in U.S. agriculture. But do we need to grow so much of it?

Our food systems are in dire need of more diversity that include more healthy, readily consumable crops. Farmers already know that by rotating crops and having more crop diversity they can use less fertilizer, fewer chemicals, and getting better natural yields, but they need the agricultural policy that backs them up for making these risky financial changes. The nitrogen pollution problem can be greatly reduced by cutting back on our crop acreage a bit and growing more food, instead of industrial products.

We have already seen a ‘dead zone’ in the Black Sea shrink away because of shifts away from fertilizer and feedlot intensive agriculture in Eastern Europe, why shouldn’t we cute back our own? With the Farm Bill in heated debate and uncertainty, perhaps now is not the best time to bring our priorities on agricultural subsidies into question. But if we don’t start looking at the problem in the picture, when will we change it?