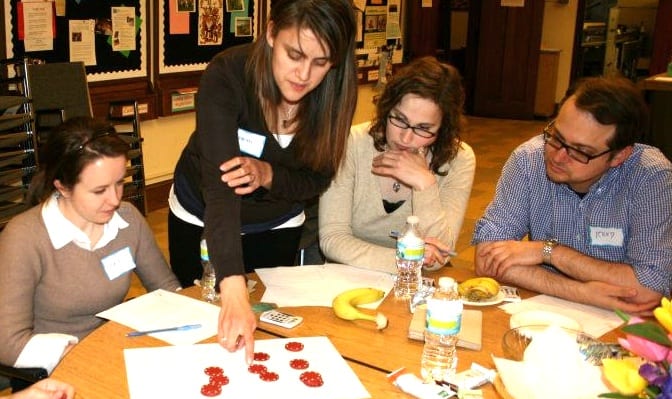 “The best solutions to tough problems come through engaging citizens,” says C. Scott Cooper, director of engagement and communication at the Bush Foundation. Sean Kershaw, executive director of the Citizens League, adds, “Hardly anything has a bigger impact on people’s lives than health care.  The public wants to have this conversation, but needs the invitation.”

Last year the two organizations took “a bit of a gamble,” when they embarked on a series of community conversations about the state budget. Confident that Minnesotans would sit down with complete strangers to discuss the budget, the partners scheduled a series of gatherings throughout the state.  This year they’re back, inviting citizens to come together to discuss health care in Minnesota.

More than 35 Citizen Solutions conversations will be held between April and July in communities as diverse as Bemidji and Willmar, North Minneapolis and Worthington, Eden Prairie and West St. Paul. According to Stacy Becker, project director at the Citizens League, her organization provides content, facilitation, and online reporting, while the Bush Foundation recruits participants, with the help of an outside firm, and promotes the meetings.

With this year’s events there’s an added bonus. Shortly after the conversations are completed, findings will be compiled in a report to be delivered to the bi-partisan Minnesota Health Care Reform Task Force appointed by Governor Mark Dayton.

That task force, along with members of the Governor’s Cabinet, is charged with developing an action plan for reforming how health care is delivered and paid for in the state. Its intent is to improve access, lower costs, and improve Minnesotans’ health. Citizen input is critical, according to health care meeting organizers.  The initiative fulfills a request by the Task Force, “to receive guidance directly from citizens.”

Stakes are high to turn out a diverse cross-section of citizens to Citizen Solutions meetings.

“The impact of the report will be negligible,” says Cooper, “unless it’s broad-based, representing different points of view on health care.” This means that parents, farmers, seniors, low-income residents, and small business owners, among others, need to participate to share experiences they’ve had with the health care system.

A member of the team working on the project reports that Citizen Solutions uses a variety of tools to help with meeting recruitment. “We are partnering with both the Chamber of Commerce and Take Action to reach out to their membership. For example, at the meeting last night in Rochester, a number of Chamber members showed up to participate thanks to the outreach of the local Chamber.”

Citizens League has also done recruitment through its list of supporters. “For last night’s meeting (in Rochester), which had 45 attendees, the community college where the meeting was held, sent out a meeting notice to its health programs. For next week’s meeting in Northfield, the League of Women Voters distributed materials to their local members.”

Citizen Solutions is also using voter files to reach out to potential participants via phoning. Prior to the first meeting, held in South Minneapolis, “three zip codes around the meeting location were phoned into.” In addition, organizers continue to reach out to local and regional organizations and groups to help assure a mix of individuals.

Community conversations are designed to provide citizens rare opportunities to hear a range of viewpoints, engage in respectful discussion at a time of harsh partisan rancor, and be steered to action. “Great conversations emerge when people of diverse points of view come together,” observes Kershaw. 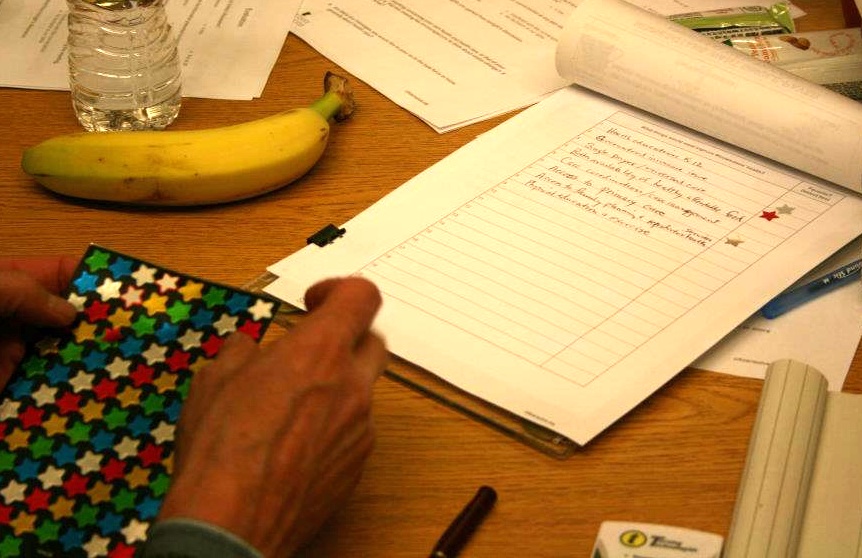 Sharing and gathering information about health care is a major purpose. Cooper says that enough information must be provided, but people must not be overwhelmed. Facilitators will provide generally agreed upon facts and trusted data through a power point presentation and handouts as a way to inform and spur interaction.

Those who attend will be seated in small groups, typically three to five at a table, where they’ll exchange ideas and stories, and participate in a series of polls and exercises.

When a person sits down they’ll find an interactive clicker at their place, which will allow them to weigh in on questions posed by the facilitator. Among the questions, each with an array of possible answers, are:

Data compiled from these surveys will be presented in a final report, to be presented to task force members in August.

Lake of the Isles Church as First Venue

Lake of the Isles Lutheran Church was the site of the kickoff Citizen Solutions conversation, facilitated by Becker, on Thursday, April 12. Nearly two dozen people attended.

Demographic information was gathered at the end of the two hours. The largest age group represented was ages 51 to 65.  All participants were white. Three-quarters said they were “reasonably comfortable” with their income, or “financially comfortable with few worries.” Over half (55 percent) said they are or have been employed by or associated with a health care organization. The vast majority (68 percent) identified as liberal. There were no self-identified conservatives present.  Only four percent described themselves as “moderate.”

Becker says that not all gatherings will be so homogeneous, and that many communities will draw participants who fall elsewhere on the ideological spectrum.

Data from subsequent conversations, one held in St. Paul’s St. Anthony Park neighborhood, the other in Rochester, provided more diversity in terms of race, ethnicity, and political identification. At this point, 36 percent of participants label themselves “liberal,” 14 percent “moderate,” and 12 percent as “conservative.” The remainder has been a mix of independent, socialist, libertarian, and “other.”

One attendee of the Minneapolis exchange, the mother of an autistic child, was pleased to have the opportunity to share stories about her challenges navigating the current health care system. Another observed the lack of diversity. “We’d be having a very different conversation if this were being held a few miles to our north.”

Information compiled at the workshops will be shared with the public through the CitiZing! website, as well as with media outlets, making it fodder for a broader conversation about health care in Minnesota.

The Citizens League is also launching a series of online activities to complement in-person meetings. The web will provide bi-weekly discussions featuring panelists from a variety of backgrounds and roles, a place for anyone to share stories about their experiences with the health care system, and check out stories posted by others, and an outlet for discussions about anything that’s not been covered.

By the time the project is completed, says Cooper, trends will emerge that will be useful to the bi-partisan task force.  One of Kershaw’s hopes is that members of the task force will attend some of the meetings to experience the “the magic and dynamic” that can occur during such exchanges. Being present could “really help the report’s findings come to life.” 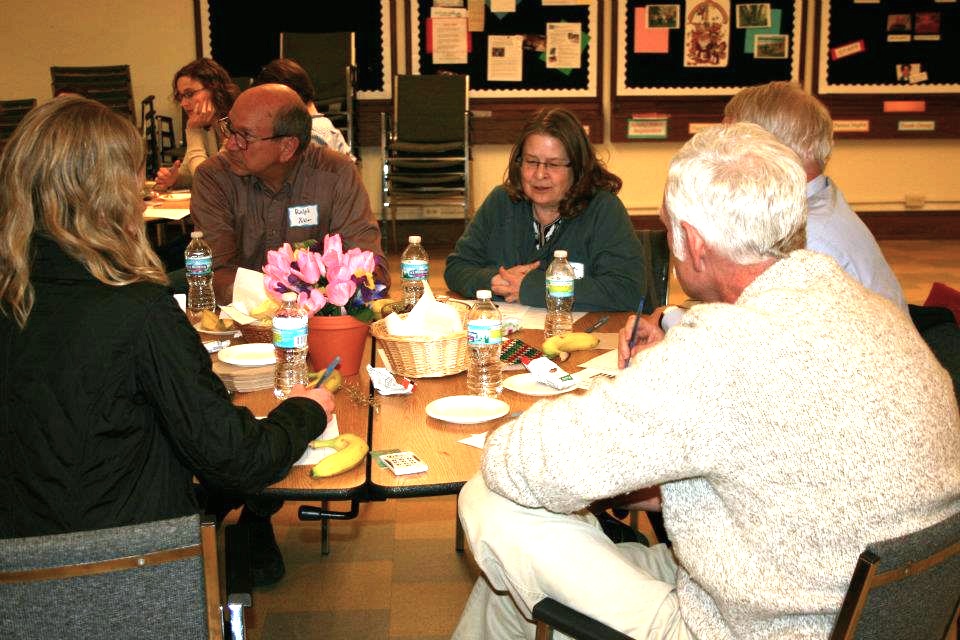 Becker emphasizes how important it is to discover “common ground” from the diversity of voices that will be heard in communities across the region. “We’re all stakeholders in this,” she says. “Everyone sees the need for change. The question is what kind of change and what steps do we need to take to get there? What can we move forward on?”

One participant in the Lake of the Isles conversation, Mark Anderson, executive director of the Barbara Schneider Foundation, said that a lesson he’s learned is the value of citizens serving as members of appointed task forces.

Anderson added, “MinnesotaCare isn’t perfect but it was a huge step forward. Hopefully the experience of that effort will encourage the Governor and the Legislature to include strong citizen participation in the round of reforms being undertaken this year.”