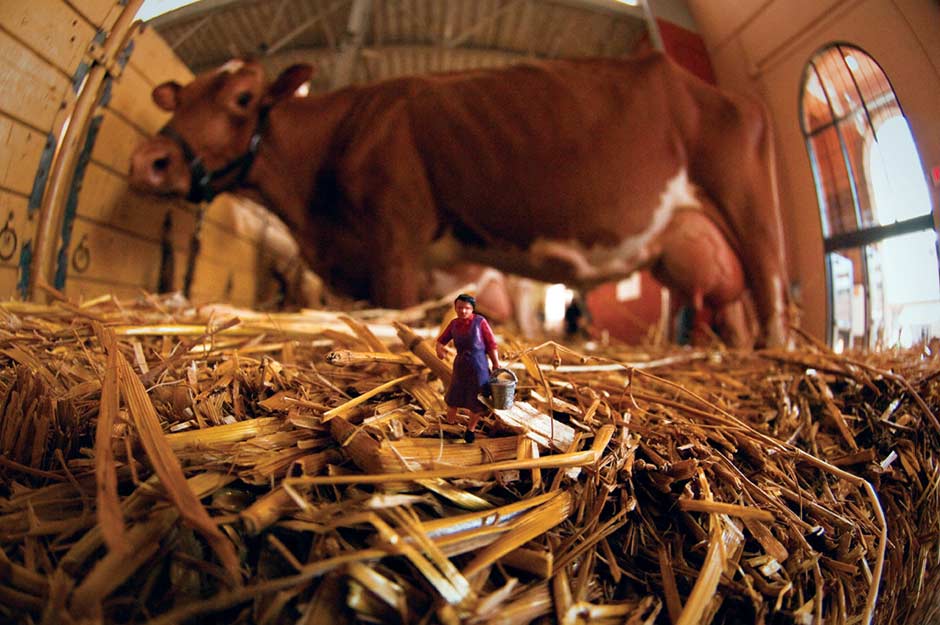 In the world of minis, there are close encounters with bugs that seem prehistoric, adventures in far off places, and seemingly impossible tasks – like milking a cow. Photographer Kurt Moses and his wife, Edwige, began documenting the life of minis several years ago on their site Un Petite Monde (A Small World). But it wasn’t until Moses shared his photos with Longfellow resident and graphic designer Kelly McManus that the idea for the book Welcome to the Small World: A Book of Big Surprises! was born. McManus wrote little stories for each of the images and compiled them all into a book.

The three brought the book to Kickstarter where it has received overwhelming success. Currently, they have 15 days remaining to receive funds, and they have already surpassed their goal. With new stretch funding goals set, they hope to add more pages to the book, increase the print run, and create an eBook.

We had the chance to ask the team a few questions about the process – from photographing minis to writing compelling storylines. The Q&A is below:

MB: Kurt, on your website Un Petit Monde, you comment that your inspiration for your photography stems from how you view view life and the world around you. Can you talk a little bit about what you mean by that?

Kurt: Photographing the miniatures is a way for me to express my beliefs, ideas, thoughts, and feelings. For example, the puddle monster scene with the crab has the miniature figure raising his oar/paddle in self defense but he doesn’t appear to be all that concerned. He may be up against something powerful and threatening but he feels confident he’ll overcome. Some scenes are less charged and more about being at peace or being content with life. I see life full of challenges and obstacles, yet beautiful at the same time. If I’m successful with my photography, it will convey these ideas and feelings.

MB: How do you pick your locations for the photo shoots? Do you have a good idea of the image you want to capture before you get there, or do you wait for inspiration to hit once you arrive on the scene?

Edwige: Kurt and I choose locations that are intriguing or meaningful to us in some way. We like to spend time together in quiet, beautiful, often historically relevant places. We love the MN North Shore, we are drawn to Route 66 and its significance, and we think that the Southwest is a gorgeous backdrop for the miniatures. We are also sometimes presented with great opportunities, like our photo shoot in Hawaii. We are always in the process of planning a trip for the miniatures. Depending on the location Kurt has more or less an idea of the image he wants to capture. I would say that the farther the destination and the more research and thought goes into each scene. When Kurt and I take a walk in our nearby State Parks, he will have a handful of preselected minis that he thinks will come in handy and will photograph them as we explore. On extended trips, the locations and the scenes are more studied.

MB: Kurt, I read that you shoot with available light and don’t do much to change variables like weather, people, bugs. Some of your images have bugs or animals as one of the subjects. Is this interaction with bug/animal and mini serendipitous or a planned encounter?

Kurt: Completely by chance! I may look for insects and small animals to interact with, but often they don’t turn out to be what I had intended. I like to think of it as photojournalism: you might be called to document a house fire but that doesn’t mean you’ll end up photographing the red fire engine spraying water on bright orange flames, instead you may be documenting steam rising from smoldering ashes. Although I have an idea I’d like to convey through my work, the environment and unknown variables may change whatever preconceived ideas I had.

MB: Can you talk a little bit about the collaboration process for developing the stories that accompany the images?

Kelly: I feel like I get the best part — the “looking through the Christmas catalog in pajamas by the fireplace” part — which is getting a first peek at the just-sent treasure trove of images Kurt just finished shooting, getting to pick my favorites, all the while imagining different story lines. The story’s essence is already there, I just pull a bigger story from it — make it spark, add a little additional magic. What’s been fun in the collaboration process is when Kurt says things like “I had no idea that story was in there.”

Kurt: I love that the stories come solely from how Kelly interprets my photography! I wouldn’t want anyone to dictate how I photograph something so personal as my images, and I don’t want to influence Kelly’s interpretation of what she sees in them.

Kelly: Yes, I think we collaborate well, because we’ve known each other for so long; there’s a trust in each other’s talents that is implicit. So I don’t fuss with the image concepts (Ok, full disclosure: I’ve totally tried to noodle and he’s always right — my ideas never work!), and he leaves the stories to me. We’re a good team together. From there, I selected about 70 images, and then started developing the stories. For me, it’s about discovering how a kid would interpret the scenes. Or I might decide what kind of contrary or ironic adventure is happening. From there it usually flows. All in all, we’ve landed on about 20 final images for the book.

MB: What has been the most challenging part of the project?

Kurt: My style of shooting has evolved since starting this project and you can see the progression when comparing the newer and older work side by side. I would say it has been a challenge to stay consistent with how I present my thoughts and ideas while I adapt to different lenses and camera gear.

MB: Why did you decided to go with a Kickstarter campaign instead of going through the traditional publication route?

Kelly: We tried pitching it via the traditional publishing route, and we were told that it’s too unconventional of a kids book for agents to sell because the narrative doesn’t follow a traditional story arc (start with a problem, end with a solution.) But what we found over and over again was that when kids read the book the “industry standards in storytelling” fell to the wayside. When presented with these magical, up-close, fairy-tale-like photos they were mesmerized and the small stories in each vignette enhanced that for them. It was the same experience with adults.

So my decision to do a Kickstarter campaign was a way to put all the cards on the table … a way to lay it all out and say “Here is our idea. Help us get this printed.” My greatest delight is not only seeing family and friends as backers, but to see backers from the UK to Brooklyn, and everywhere in between. People we don’t know, all saying “Yes!” How fun is that?