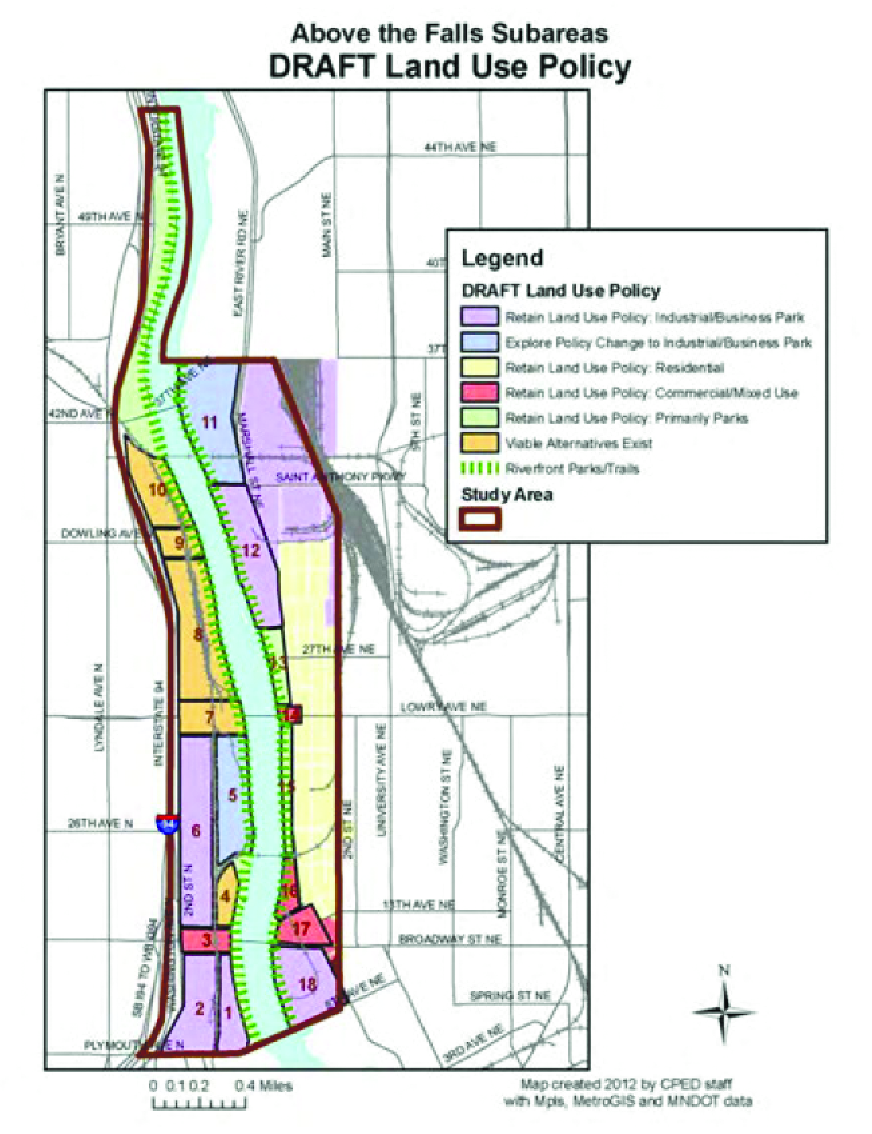 Minneapolis city planners say they’re almost ready to start asking the general public if they got it right, or in some cases, to help choose which unprecedented public investment to pursue.

They’re working on revisions to the Above the Falls Master Plan for both sides of the Mississippi River north of downtown, a few blocks inland in both Northeast and North Minneapolis. “ATF” was issued in 2000, and now market conditions have changed. Planners ran financial models, talked to experts about what’s feasible, and are now “refining scenarios.”

At a June 26 meeting at the Minneapolis Park and Recreation Board headquarters on West River Road, they also introduced the Health Impact Assessment which looks at how projects will affect health before decisions are made.

The three areas with potential for most dramatic change are the area around the Park Board headquarters, two areas proposed to turn industrial into residential use, and the northwest quadrant, which pivots on the Upper Harbor Terminal.

Planners Haila Maze and Tom Leighton from the City and Andrew Caddock from the Park Board said both bodies are committed to a public riverfront with parks, trails and other amenities.

Their full presentation, quoted in part below, is posted online at www.minneapolismn.gov/ cped/ projects/cped_above_the_falls.

In the area planners call Subarea 4, they recommend to “ameliorate conflicts between existing uses,” particularly where Cemstone prepares concrete right next to Riverview Townhomes. The plan revision calls for immediately buffering the townhomes from the plant, and negotiating with Cemstone to modify operations.

Subarea 4 includes the Park Board headquarters at 2117 West River Road; the area extends from Broadway to the railroad bridge, from the river to the railroad track. Park interests want to continue to connect park and trail networks. Staff are recommending leaving the existing zoning, which is light industrial, and includes an “overlay” that also allows office or residential uses. They recommend marketing sites for high quality development and support public cleanup funding for desirable projects. They also see it as possible to change all or part of zoning to restrict development to residential or office uses.

The two “transformation” areas traditionally industrial which had been recommended to change to housing are Subarea 5, north of Subarea 4 and south of Lowry in North Minneapolis; and the area south of 37th to St. Anthony Parkway bordering the river in Northeast.

Current planners found that these areas have characteristics desirable for industrial development such as large, flat parcels, excellent transportation access and buffering from residential development.

Residential development would also be possible because of the same factors, but might create the feeling of a disconnected neighborhood. Relocating existing businesses would be “unusually expensive and difficult.”

The northwest quadrant has some “low hanging fruit” because the city has put the Upper Harbor Terminal on a short term lease and business there is winding down. The city owns 48 acres, and it is “not intensively developed.” (The northwest quadrant is south of the Camden bridge, to a short distance south of Lowry, on the North Minneapolis side)

There is otherwise a “130-plus acre industrial area well-connected to highway system and downtown core” and the rest of the northwest quadrant includes industry and some homes and smaller scale businesses. The current Above the Falls plan calls for changing this to housing.

The revised plan could go any of three ways:

• All industry. Planners say there’s already “a submarket of industrial businesses building new to suit their own needs,” and there’s no market-timing delay for owner-occupied industrial development, compared to leasing an industrial park.

Growth in tax base can be used to pay for site preparation costs for Upper Harbor Terminal redevelopment, planners say, but large-scale industrial redevelopment in the rest of the northwest quadrant is not financially feasible. “Infill development over time as opportunity allows can continue to build industrial park brand.” The city would use its usual tools to encourage development.

The planners will be refining scenarios, then bringing them to the public this fall, with draft recommendations out for review in winter.

Committee chair Lauren Maker has been interested in public health since 1989 when the garbage burner opened and all sorts of people developed asthma.

She noted that the Near North area (south of Lowry) has neighborhoods with the city’s greatest risk of premature death (before age 65). ZIP code 55412 has the city’s highest levels of obesity, the HIA presentation showed.

Parks offer low-cost recreation, and it’s been noted that “after new parks open, neighbors are more likely to interact, take pride in their communities, and form neighborhood watch and other local improvement groups.”

Participants were invited to put health comments on a wall, and there will be ongoing opportunities to think about the Above the Falls revision in health terms.